For those who are interested in such things, here are some stats related to WIST.
First off, how many quotes do I actually have here?

Hmmm. Looks like I’ve been slacking. In reality, though, I’ve been focusing on cleaning up and fleshing out citations. Quality over quantity, so to speak.
Secondly, who said what — and who are the most “popular” quote-makers here? 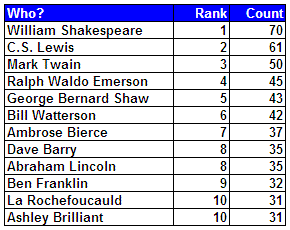