We last updated the numbers back in April 2010, but since I’m thinking about it, here’s where we are now.

I moved a few other things from “Miscellaneous” into authored categories, but the overall quotations made a very nice increase over the last year (if I’d waited until the end of April, I’d be a full thousand more quotes). I’ve also added a good number of new authors.

Speaking of authors, here’s the current Top 10 (expanded a bit, due to ties).  The ones in italics have jumped into the list since last year. 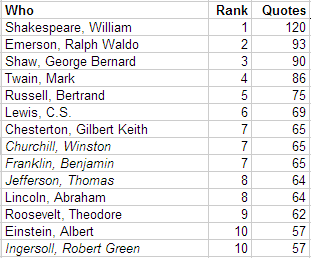 There’s now a listing in the sidebar (“Prolific Authors”) to show this info dynamically.

The current Top Quotes (by views) are always shown in the sidebar, too (“Popular Quotables”).  As a snapshot, and with author:

As far as traffic goes, according to Google Analytics I averaged about 107 visits a day in the last month, which looks to be up from the previous period, averaging around a thousand page views a week.  Not too shabby — hardly fortune and glory, but a nice validation for my hobby.