Another good year of WIST since I last ran these (back last March). Let’s look at the historical count:

Another good, steady increase, including topping the 10K milestone. Very pleased with that. 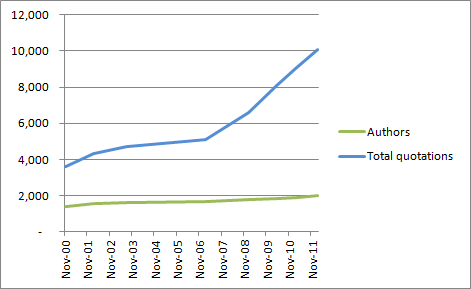 A slow, steady increase in authors over time (which is not surprising — the most popular authors would already be in the database, though I still come up with a remarkable number of folks who I don’t yet have on the list).

The number of quotes shows how I’ve, for the last five years, been trying to do my five-quotes-a-weekday regimen, and managing to do so successfully.  This is one of the longest sustained projects of mine, and I’m pretty darned proud of it. 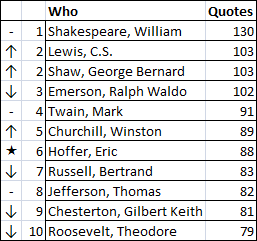 This table shows the top ten most prolifically quoted authors here, with trending notes showing where folks have risen and dropped in rank.  Eric Hoffer is new to the list, and former top 10ers who have fallen off from last year include luminaries such as Ben Franklin, Robert Green Ingersoll, Albert Einstein, and Abe Lincoln. (Last year there were actually 14 people on the list, due to ties — I remain amazed by how close some of the numbers are.)

You can always see the current Top 10 in the sidebar.

As for the most popular quotes on the site (and showing where they went up or down in the ranking):

The addition of the Campbell quote pushed from the Top Ten list Lord Chesterfield’s Letter to his son (9 Oct 1746). Why these numbers are as they are surpasseth understanding.

Finally, Google Analytics tells me over the last year I’m getting about 83 visitors a day, and 116 pageviews.  That’s up from the previous year’s 73 and 103, which is kind of nice.

And … that’s enough numbers for today.