Another year, another “State of the WIST” post.  I last ran this report last February.

Despite vacations and illness and other vagaries of schedule, I managed to keep a pretty steady increase over the course of the year. 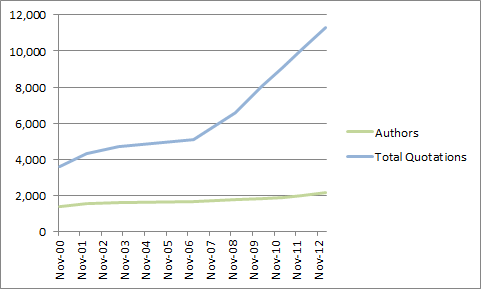 I actually upped the number of new authors this year, consciously (I have a large backlog of quotations from authors I haven’t yet entered into the system).  Another project I’ve had (aside from a slow sweep through the database, eliminating duplicate quotations, trying to source things, etc.) is to go through the authors and note ones who have died.  (Any deceased that aren’t noted as such, please do let me know.)

Of the authors I do have, who are the most quoted in WIST? 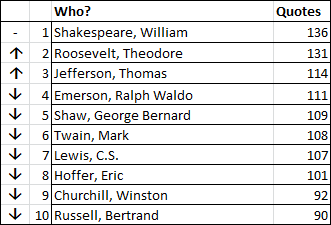 No adds or drops from the Top 10, just a reshuffle (all of these had absolute number increases, but just shifted in the quantity rank).  That I had (still have) a long list of TR and Jefferson quotes that I’m running through here is the main reason why (yes, Shakespeare is losing his top ranking by the time I do this again next year).

I’m still amazed by how tightly most of these are clustered. The Top 10 Authors are listed in the sidebar.

There was a bit more ranking movement on the Top Ten most visited quotations (also referenced in the sidebar):

Two new quotes this year on the Top 10, the Baldwin and the Ivins (the latter, I suspect, as guns have been much in the news this year).  The two losers were already on the bottom last year, Teddy Roosevelt and Nathaniel Hawthorne. The Einstein quote was identified as a synthesis of several others of his written statements.

Google Analytics tells me that traffic is about where it was in visitors per day — 83 — but has jumped a lot in page views — 254 vs 116 last year.

Interestingly, 13% of my visitors are from a mobile platform, which really makes me think I need to figure out how to do a mobile-friendly version of the site (difficult because the the customization I’ve done in the core template files — which is a reason I’ve not changed the overall theme here, either).

And that’s probably enough numbers for now. Back tomorrow with … letters!

This site uses Akismet to reduce spam. Learn how your comment data is processed.