Another year, another “State of the WIST” post.  I last ran this report a year ago. Let’s start with the raw count:

So, yeah, nice, steady progress. Generally speaking I post five quotes a day, every weekday. Sometimes something gets in the way, but by and large it’s been a workable schedule. 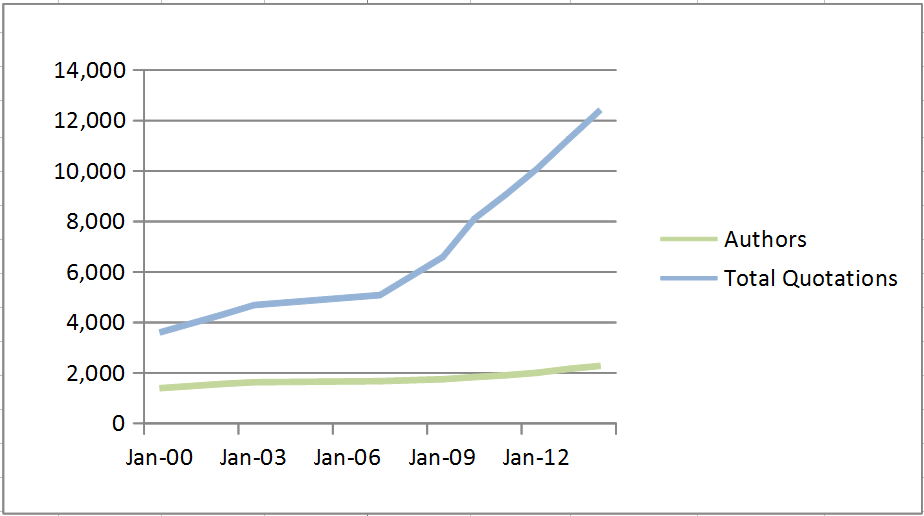 I’ve been making a conscious effort to increase the number of authors (or not shy away from adding a one-off by a new author). That makes for better diversity.

Of the authors I do have, who are the most quoted in WIST? 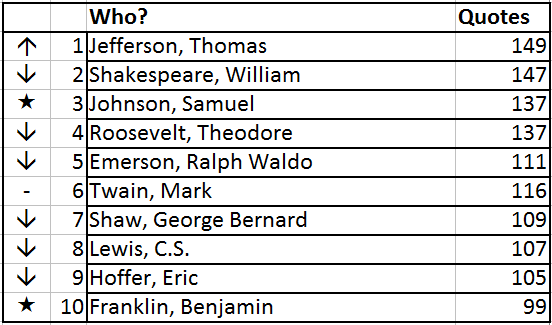 A lot of this is based on blocks of quotes I go through in a given year. A lot of Thomas Jefferson and Samuel Johnson have been popping up the last twelve months, with Johnson being on the Top Ten list for the first time in quite a while — looking at the backlog, he may end up on top by this time next year. Ben Franklin has also clawed his way back onto the leader board.

“Losers” (dropping off the Top Ten) were Bertrand Russell and Winston Churchill.

The Top Ten Author list is shown “live” in the sidebar — as is the Top Ten Visited Quotations. That list shows less movement, since it is cumulative over all time:

Unfortunately, I can’t track the most popular items in the last year, but for the last 60 days, per Google Analytics:

So some overlap there.

Google Analytics shows me my traffic is way down this year — 25 visitors/day vs 83 (21 o them unique), with 34 pageviews/day vs 254.  That’s a bit disappointing, though it’s not going to stop me from continuing the site by any means. I’d love to drive more traffic here — not just for the egoboo but because I’d like to think it’s a valuable resource.  The question is how.  (Suggestions are welcome.)

Over 90% of my traffic is from English-speaking space, about 70% from the US. Though I do get hits from UK, Canada, France, India, Australia, Sweden, the Netherlands, Romania and Germany in the top ten.  Chrome and IE are the top contenders for browser, and 71% of visitors are on Windows; the next biggest OS is iOS, so a lot of iPhone/iPad viewers out there.  One of these years, after I hit the lottery, I’ll craft a mobile version of WIST that can deal with all of the realignment of fields I do to make all these beautiful quotations …