Zeus, who guided mortals to be wise,
has established his fixed law —
wisdom comes through suffering.
Trouble, with its memories of pain,
drips in our hearts as we try to sleep,
so men against their will
learn to practice moderation.
Favours come to us from gods
seated on their solemn thrones —
such grace is harsh and violent. 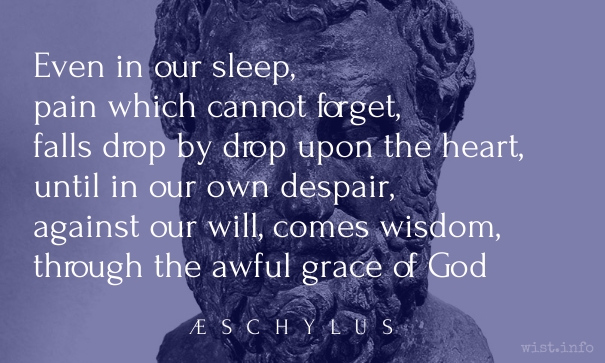 Alt. trans.:The first Hamilton alternate was used, slightly modified, by Robert Kennedy in his speech on the assassination of Martin Luther King, Jr. (4 Apr 1968). Kennedy's family used it as an epitaph on his grave Arlington National Cemetery: "Even in our sleep, pain which cannot forget, falls drop by drop upon the heart, until in our own despair, against our will, comes wisdom, through the awful grace of God."