The modern conservative is not even especially modern. He is engaged, on the contrary, in one of man’s oldest, best financed, most applauded, and, on the whole, least successful exercises in moral philosophy. That is the search for a superior moral justification for selfishness. It is an exercise which always involves a certain number of internal contradictions and even a few absurdities. The conspicuously wealthy turn up urging the character-building value of privation for the poor. The man who has struck it rich in minerals, oil, or other bounties of nature is found explaining the debilitating effect of unearned income from the state. The corporate executive who is a superlative success as an organization man weighs in on the evils of bureaucracy. Federal aid to education is feared by those who live in suburbs that could easily forgo this danger, and by people whose children are in public schools. Socialized medicine is condemned by men emerging from Walter Reed Hospital. Social Security is viewed with alarm by those who have the comfortable cushion of an inherited income. Those who are immediately threatened by public efforts to meet their needs — whether widows, small farmers, hospitalized veterans, or the unemployed — are almost always oblivious to the danger. 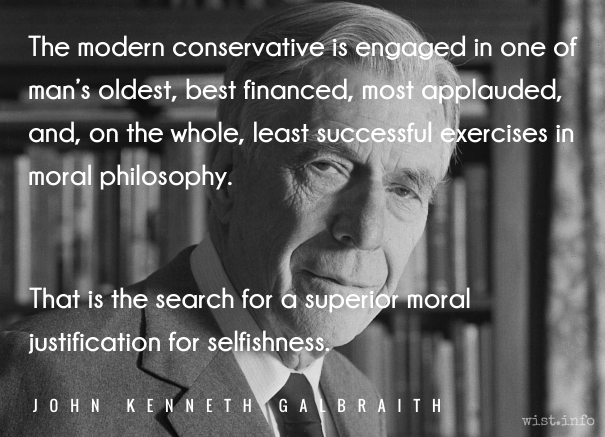 Galbraith used variations on this quote over the years.