Time for another year’s “State of the WIST” post.  I last ran this report a year ago. Some changes that took place on the site this year:

So, yeah, nice, steady progress. Generally speaking I post five quotes a day, every weekday. Sometimes something gets in the way, but by and large it’s been a workable schedule. 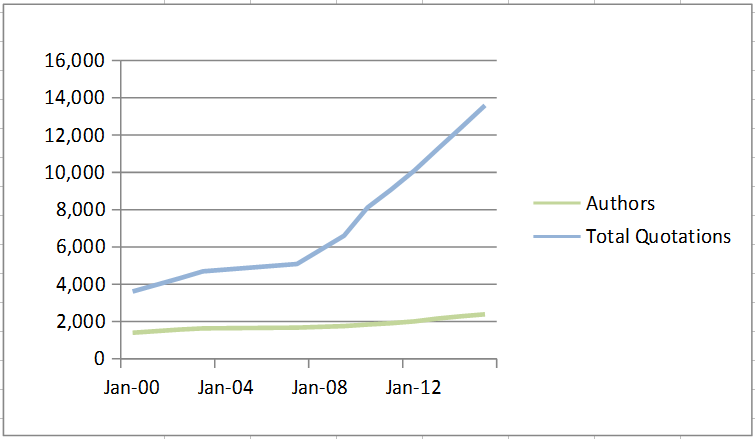 While I did some author scrubbing early in the year, I’ve also been adding a lot of authors as I go along, day to day. 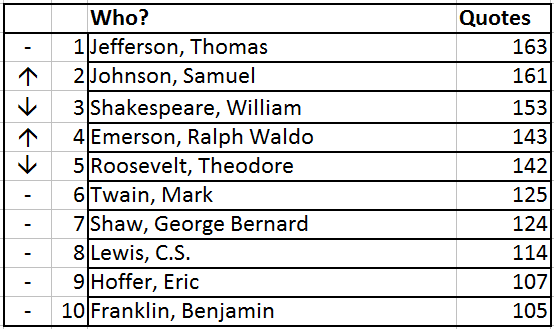 Not a lot of changes this year; the names are all the same, with just a bit of shuffling in the upper ranks (which, as you can see, are very close).

The Top Ten Author list is shown “live” in the sidebar — as is the Top Ten Visited Quotations list. That shows less movement, since it is cumulative over all time:

That Molly Ivins quote got a huge bump this last year, for whatever reasons (I suspect someone cited it somewhere, but it’s hard to say).

Unfortunately, I can’t track the most popular items in the last year, but for the last 60 days, per Google Analytics:

One thing I did this year was, in addition to my Twitter feed (92 followers), I’m now publishing to Facebook (reaching 0-3 people per post) and Google+ (8 followers). That should boost readership, in theory.

84% of my visitors are English-speakers, not surprisingly. 60% are in the US; other Top Ten countries include the UK, Canada, India, Brazil, Australia, Germany France, the Netherlands, and Italy.

81% of visits come from desktop users; ony 14% mobile and 6% tablet. I’d like to push those numbers up, but it will require extra template work to make happen, since my own template is so heavily customized for the quotation display.