Time for another year’s “State of the WIST” post.  I last ran this report a year ago.

What’s happened over the last year?

Some changes that took place on the WordPress site this year:

So continued progress. Generally speaking I post five quotes a day, every weekday — though, to be honest, that number was a lot spottier starting mid-2016 (due to new employment, then some more unemployment). 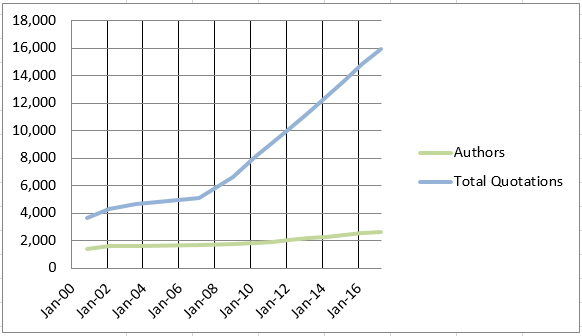 Note that, as always, all of these are curated to some degree or another — digging out citations when possible, finding author photos, etc. No mass uploads for me. 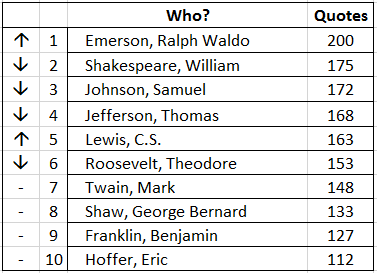 I had nobody new on the Top 10 Quoted Authors list this year, just some shuffling around within the stats, with Emerson rising to the top when I came upon a new trove of his quotations (the man was prolific, between his lectures and his journals). Runners-up (Bertand Russell, Winston Churchill, John F. Kennedy, Thomas Fuller, Abe Lincoln, Martin Luther King) are all within spitting distance of getting on the list if I run across a good source of unused quotes for them.

The Top Ten Author list is shown “live” in the sidebar (“Prolific Authors”).

Here are the Top 10 Most Visited Quotations (with how they’ve changed since last year):

Nothing new on the list, just jockeying for position. That’s not surprising, since the numbers have gotten so big and have been tracked for so long.

Over the last year, the Top 10 viewed quotes were, according to Google Analytics:

Not surprisingly, a number of the new entries on the list above were quotes that have graphic images associated with them.

Who Are You People?

I also started posting the quotations with graphics on on Tumblr (1 whole person following!) and Pinterest (10 people following!).

Those numbers aren’t huge, by any means — but this is a labor of love, and it’s nice to see that some folk are finding it of use and/or interest.

85% of visits are by English-speakers; no other cohort gets above 1.25%. Nationally, 57% are from the US, another 8% from the UK, with India, Canada, and Australia rounding off the Top 5.

I don’t currently have any major plans on WIST for the coming year, but some things i do have in mind:

The biggest question mark I have is how changing to being employed again (whenever that happens, soon I trust) will change posting patterns again. We’ll see.

And that’s the end of the annual report. See you next year!