I do not believe that any man can lead who does not act, whether it be consciously or unconsciously, under the impulse of a profound sympathy with those whom he leads — a sympathy which is insight — an insight which is of the heart rather than of the intellect.

I have always been among those who believe that the greatest freedom of speech is the greatest safety, because if a man is a fool, the best thing to do is to encourage him to advertise the fact by speaking. It cannot be so easily discovered if you allow him to remain silent and look wise, but if you let him speak, the secret is out and the world knows that he is a fool. So it is by the exposure of folly that it is defeated; not by the seclusion of folly, and in this free air of free speech men get into that sort of communication with one another which constitutes the basis of all common achievement.

A conservative is a man who sits and thinks, mostly sits.

Ere I close, you will let me add my emphasis to the fact that it is in our life and conduct that we must show our devotion to Christ. The silent Gospel reaches further than the grandest rhetoric.

It is just as hard to do your duty when men are sneering at you as when they are shooting at you.

A member of the Cabinet congratulated Wilson on introducing the vogue of short speeches and asked him about the time it took him to prepare his speeches. He said: “It depends. If I am to speak ten minutes, I need a week for preparation; if fifteen minutes, three days; if half an hour, two days; if an hour, I am ready now.”

The wisest thing to do with a fool is to encourage him to hire a hall and discourse to his fellow citizens. Nothing chills nonsense like exposure to the air.

Added on 6-May-10 | Last updated 6-May-10
Link to this post | No comments
More quotes by Wilson, Woodrow

In public affairs, stupidity is more dangerous than knavery.

Benevolence never developed a man or a nation. We do not want a benevolent government. We want a free and a just government. Every one of the great schemes of social uplift which are now so much debated by noble people amongst us is based, when rightly conceived, upon justice, not upon benevolence.

It is a fearful thing to lead this great peaceful people into war, into the most terrible and disastrous of all wars, civilization itself seeming to be in the balance. But the right is more precious than peace, and we shall fight for the things which we have always carried nearest our hearts, for democracy, for the right of those who submit to authority to have a voice in their own governments, for the rights and liberties of small nations, for a universal dominion of right by such a concert of free peoples as shall bring peace and safety to all nations and make the world itself at last free. To such a task we can dedicate our lives and our fortunes, everything that we are and everything that we have, with the pride of those who know that the day has come when America is privileged to spend her blood and her might for the principles that gave her birth and happiness and the peace which she has treasured. God helping her, she can do no other.

A great nation is not led by a man who simply repeats the talk of the street-corners or the opinions of the newspapers. A nation is led by a man who hears more than those things; or who, rather, hearing those things, understands them better, unites them, puts them into a common meaning; speaks, not the rumors of the street, but a new principle for a new age; a man in whose ears the voices of the nation do not sound like the accidental and discordant notes that come from the voice of a mob, but concurrent and concordant like the united voices of a chorus, whose many meanings, spoken by melodious tongues, unite in his understanding in a single meaning and reveal to him a single vision, so that he can speak what no man else knows, the common meaning of the common voice. Such is the man who leads a great, free, democratic nation.

In the last analysis, my fellow countrymen, as we in America would be the first to claim, a people are responsible for the acts of their government.

I not only use all the brains I have, but all I can borrow.

I can imagine no greater disservice to the country than to establish a system of censorship that would deny to the people of a free republic like our own their indisputable right to criticize their own public officials. While exercising the great powers of the office I hold, I would regret in a crisis like the one through which we are now passing to lose the benefit of patriotic and intelligent criticism.

Three weeks after the US entered WW I.

If you want your memoranda read, put it on one page. 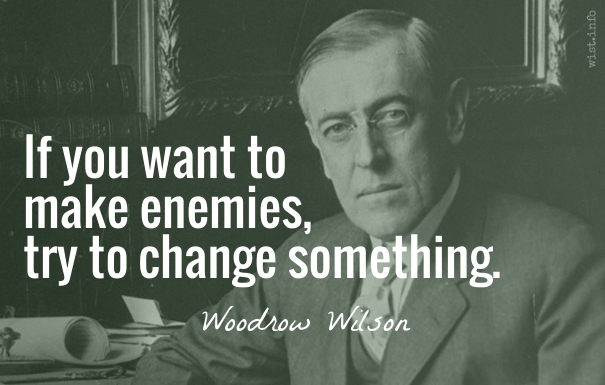 I have always been among those who believed that the greatest freedom of speech was the greatest safety, because if a man is a fool, the best thing to do is to encourage him to advertise the fact by speaking. It cannot be so easily discovered if you allow him to remain silent and look wise, but if you let him speak, the secret is out, and the world knows that he is a fool. So it is by the exposure of folly that it is defeated, not by the seclusion of folly, and, in this free air of free speech, men get into that sort of communication with one another which constitutes the basis of all common achievement.

A friend of mine says that every man who takes office in Washington either grows or swells; and when I give a man an office, I watch him carefully to see whether he is swelling or growing.

Do you covet honor? You will never get it by serving yourself. Do you covet distinction? You will get it only as you serve mankind. Do not forget, then, as you walk these classic places, why you are here. You are not here merely to make a living. You are here to enable the world to live more amply, with greater vision, and with a finer spirit of hope and achievement. You are here to enrich the world, and you impoverish yourself if you forget this errand.

My advice is: Do not think about your character. If you will think about what you ought to do for other people, your character will take care of itself. Character is a by-product, and any man who devotes himself to its cultivation in his own case will become a selfish prig.