A maxim for the twenty-first century might well be to start not by fighting evil in the name of good, but by attacking the certainties of people who claim always to know where good and evil are to be found. We should struggle not against the devil himself but what allows the devil to live — Manichaean thinking itself.

We should not be simply fighting evil in the name of good, but struggling against the certainties of people who claim always to know where good and evil are to be found.

A political ideology is a very handy thing to have. It’s a real time-saver, because it tells you what you think about things you know nothing about.

Preparation essay for the PBS series on modern presidents. The passage itself is referring, in contrast, to Ronald Reagan, who defeated Carter for reelection as US President in 1980.

He took my seat and smiled again, like an affable crocodile. He was probably a very principled man, too. So were they all, all principled men. And women. There were few things more annoying than a visibly principled person. Or more troublesome. Most of the ones I’d met could have used a little uncertainty to dilute their principled-ness.

There is no proselyter half so energetic as the hard-shelled atheist.

Added on 3-May-17 | Last updated 3-May-17
Link to this post | No comments
Topics: atheist, conversion, convert, ideologue, proselytize
More quotes by Broun, Heywood

The practice of terror serves the true believer not only to cow and crush his opponents but also to invigorate and intensify his own faith. 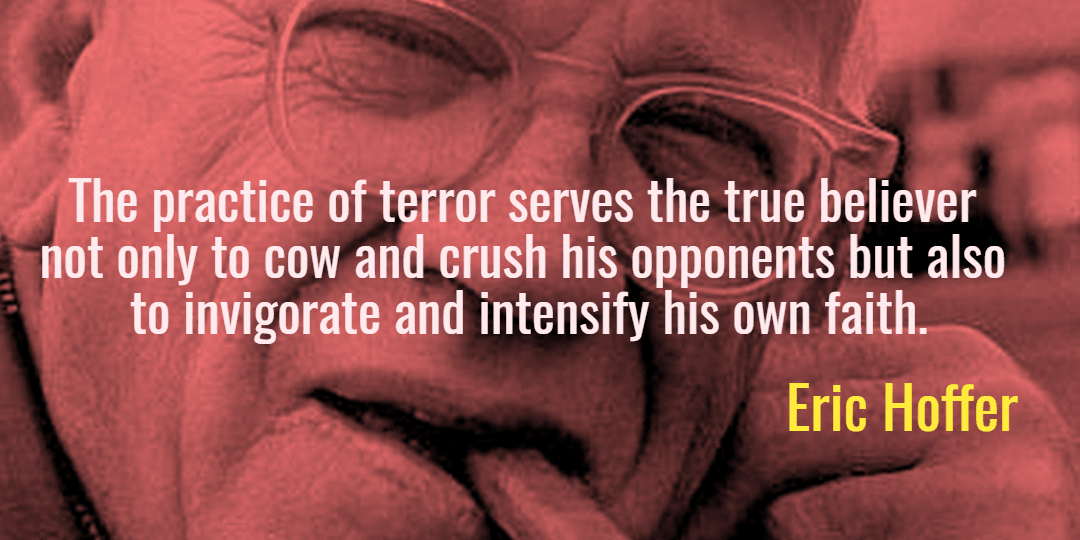 The conflict to different approaches to the liberty of man and mind or between different views of human dignity and the right of the individual is continuous. The dividing line goes within ourselves, within our own peoples, and also within other nations. It does not coincide with any political or geographical boundaries. The ultimate fight is one between the human and the subhuman. We are on dangerous ground if we believe that any individual, any nation, or any ideology has a monopoly on rightness, liberty, and human dignity.

A dogmatical spirit inclines a man to be censorious of his neighbors. Every one of his opinions appears to him written, as it were, with sunbeams, and he grows angry that his neighbors do not see it in the same light. He is tempted to disdain his correspondents as men of low and dark understandings because they do not believe what he does.