The hardest spiritual work in the world is to love the neighbor as the self — to encounter another human being not as someone you can use, change, fix, help, save, enroll, convince or control, but simply as someone who can spring you from the prison of yourself, if you will allow it.

What a comfort one familiar face is in a howling wilderness of strangers!

Such is the privilege of genius; it perceives, it seizes relations where vulgar eyes see only isolated facts.

Every work of art is one half of a secret handshake, a challenge that seeks the password, a heliograph flashed from a tower window, an act of hopeless optimism in the service of bottomless longing. Every great novel or comic book convenes the first meeting of a fan club whose membership stands forever at one but which maintains chapters in every city — in every cranium — in the world. Art, like fandom, asserts the possibility of fellowship in a world built entirely from the materials of solitude.

To be unacquainted with what has passed in the world, before we came into it ourselves, is to be always children. For what is the age of a single mortal, unless it is connected, by the aid of History, with the times of our ancestors?

The greatest works of art speak to us without knowing of us.

There is nothing we like to see so much as the gleam of pleasure in a person’s eye when he feels that we have sympathized with him, understood him, interested ourself in his welfare. At these moments something fine and spiritual passes between two friends. These moments are the moments worth living.

You read something which you thought only happened to you, and you discover that it happened 100 years ago to Dostoyevsky. This is a very great liberation for the suffering, struggling person, who always thinks that he is alone. This is why art is important. Art would not be important if life were not important, and life is important.

You think your pain and your heartbreak are unprecedented in the history of the world, but then you read. It was Dostoevsky and Dickens who taught me that the things that tormented me most were the very things that connected me with all the people who were alive, or who had ever been alive. Only if we face these open wounds in ourselves can we understand them in other people. An artist is a sort of emotional or spiritual historian.
[Interview with Jane Howard, Life Magazine (24 May 1963)]

You think your pain and your heartbreak are unprecedented in the history of the world, but then you read. It was books that taught me that the things that tormented me most were the very things that connected me with all the people who were alive, or who had ever been alive.
["James Baldwin Recalls His Childhood," quoting from a television program, New York Times (31 May 1964)]

Human beings are like parts of a body,
created from the same essence.
When one part is hurt and in pain,
the others cannot remain in peace and be quiet.
If the misery of others leaves you indifferent
and with no feelings of sorrow,
You cannot be called a human being. 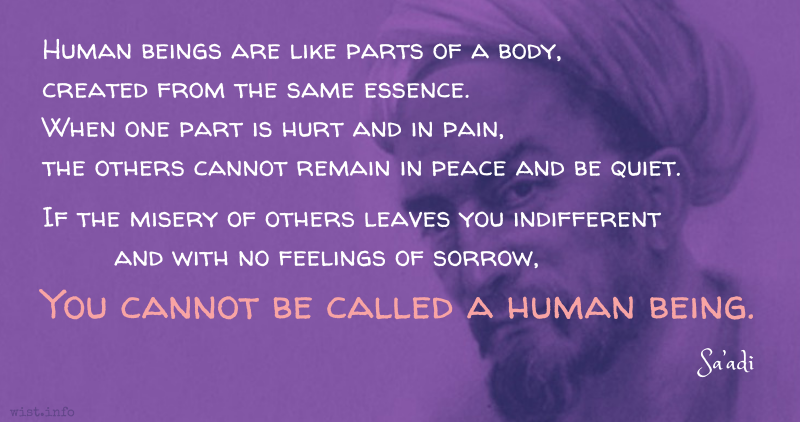 
Also known as the "Poem on Humanity" or "Human Beings". This translation was quoted by President Carter in a toast to the Shah of Iran (31 Dec 1977). (Source (Persian)).

The poem, some of the most famous Persian/Iranian verses, was suggested as a motto for the League of Nations in 1928. It was long falsely rumored that the Bashiri translation (below) was posted as the entrance to the United Nations building in New York; however, a carpet with the poem inscribed in Persian was installed in 2005 in a meeting hall in the interior of the building. There is also a plaque on the wall of the UN commemorating the United Nations Year of Dialogue Among Civilizations (2001) with the Eastwick (1880?) translation (below).

All Adam's race are members of one frame,
Since all, at first, from the same essence came.
When by hard fortune one limb is oppressed,
The other members lose their wonted rest:
If thou feel'st not for others' misery,
A son of Adam is no name for thee.
[tr. Eastwick (1852)]

All human beings are members of one frame,
Since all, at first, from the same essence came.
When time afflicts a limb with pain
The other limbs at rest cannot remain.
If thou feel not for other’s misery
A human being is no name for thee.
[tr. Eastwick (1880?); it is suggested this is the 1880 translation by Eastwick, but that is the same as the 1852 above.]

The sons of Adam are limbs of each other,
Having been created of one essence.
When the calamity of time affects one limb
The other limbs cannot remain at rest.
If thou hast no sympathy for the troubles of others
Thou art unworthy to be called by the name of a human.
[tr. Burton (1888)]

All Adam's sons are limbs of one another
Each of the self-same substance as his brother.
So while one member suffers aches and grief,
The other members cannot win relief.
Thou, who are heedless of thy brother's pain,
It is not right at all to name thee man.
[tr. Arberry (1945)]

All men are members of the same body,
Created from one essence.
If fate brings suffering to one member,
The others cannot stay at rest.
You who remain indifferent
To the burden of pain of others,
Do not deserve to be called human.
[tr. Rehatsek (1964)]

Human beings are members of a whole,
In creation of one essence and soul.
If one member is afflicted with pain,
Other members uneasy will remain.
If you have no sympathy for human pain,
The name of human you cannot retain.
[tr. Aryanpour (1970)]

Adam's sons are body limbs, to say;
For they're created of the same clay.
Should one organ be troubled by pain,
Others would suffer severe strain.
Thou, careless of people's suffering,
Deserve not the name, "human being."
[tr. Dastjerdi (1999)]

Of One Essence is the Human Race,
Thusly has Creation put the Base.
One Limb impacted is sufficient,
For all Others to feel the Mace.
The Unconcern'd with Others' Plight,
Are but Brutes with Human Face.
[tr. Bashiri (2003)]

All men and women are to each other
the limbs of a single body, each of us drawn
from life’s shimmering essence, God’s perfect pearl;
and when this life we share wounds one of us,
all share the hurt as if it were our own.
You, who will not feel another’s pain,
you forfeit the right to be called human.
[tr. Newman (2004)]

Man’s sons are parts of one reality
Since all have sprung from one identity;
If one part of a body’s hurt, the rest
Cannot remain unmoved and undistressed;
If you’re not touched by others’ pain, the name
Of “man” is one you cannot rightly claim.
[tr. Davis (2012)]

Human beings are limbs of one body indeed;
For, they’re created of the same soul and seed.
When one limb is afflicted with pain,
Other limbs will feel the bane.
He who has no sympathy for human suffering,
Is not worthy of being called a human being.
[tr. Salami]

All human beings are in truth akin,
All in creation share in one origin.
When fate allots a member pangs and pains,
No ease for other members then remains.
If, unperturbed, another's grief canst can,
Thou are not worthy of the name of man.
[tr. Sharp]

Human beings are body parts of each other,
In creation they are indeed of one essence.
If a body part is afflicted with pain,
Other body parts uneasy will remain.
If you have no sympathy for human pain,
The name of human you shall not retain.
[Source]

Adam's children are limbs of one body
That in creation are made of one gem.
When life and time hurt a limb,
Other limbs will not be at ease.
You who are not sad for the suffering of others,
Do not deserve to be called human.
[Source]

The children of Adam are the members of each other,
who are in their creation from the same essence.
When day and age hurt one of these members,
other members will be left (with) no serenity.
If you are unsympathetic to the misery of others,
it is not right that they should call you a human being.
[Source]