Terror,
Terror and silence were all I found.

All things were full of horror and affright,
And dreadful even the silence of the night.
[tr. Dryden (1697)]

Horror on all sides, and at the same time the very silence affrights my soul.
[tr. Davidson/Buckley (1854)]

A shuddering on my spirit falls,
And e'en the silence' self appals.
[tr. Conington (1866)]

Everywhere horror fills my soul, and even
The silence terrifies.
[tr. Cranch (1872)]

On all sides round
horror spread wide; the very silence breathed
a terror on my soul.
[tr. Williams (1910)]

Everywhere
Dread and the sheer silence reduced my courage to nothing.
[tr. Day Lewis (1952)]

Horror was everywhere and the very silence chilled the blood.
[tr. West (1990)]

It seems war stories aren’t very well received at this point. I’m told they’re outdated, untimely and as might be expected — make some unpleasant reading. And, as you have no doubt already perceived, human beings don’t like to remember unpleasant things. They gird themselves with the armor of wishful thinking, protect themselves with a shield of impenetrable optimism, and, with a few exceptions, seem to accomplish their “forgetting” quite admirably. But you, my children, I don’t want you to be among those who choose to forget. I want you to read my stories and a lot of others like them. I want you to fill your heads with Remarque and Tolstoy and Ernie Pyle. I want you to know what shrapnel, and “88’s” and mortar shells and mustard gas mean. I want you to feel, no matter how vicariously, a semblance of the feeling of a torn limb, a burnt patch of flesh, the crippling, numbing sensation of fear, the hopeless emptiness of fatigue. All these things are complementary to the province of War and they should be taught and demonstrated in classrooms along with the more heroic aspects of uniforms, and flags, and honor and patriotism.

Dedication to his unborn children, in one of his first (unpublished) works of fiction, while at Antioch College under the GI Bill. In Anne Serling, As I Knew Him: My Dad, Rod Serling (2013)

The most merciful thing in the world, I think, is the inability of the human mind to correlate all its contents. We live on a placid island of ignorance in the midst of black seas of infinity, and it was not meant that we should voyage far. The sciences, each straining in its own direction, have hitherto harmed us little; but some day the piecing together of dissociated knowledge will open up such terrifying vistas of reality, and of our frightful position therein, that we shall either go mad from the revelation or flee from the deadly light into the peace and safety of a new dark age. 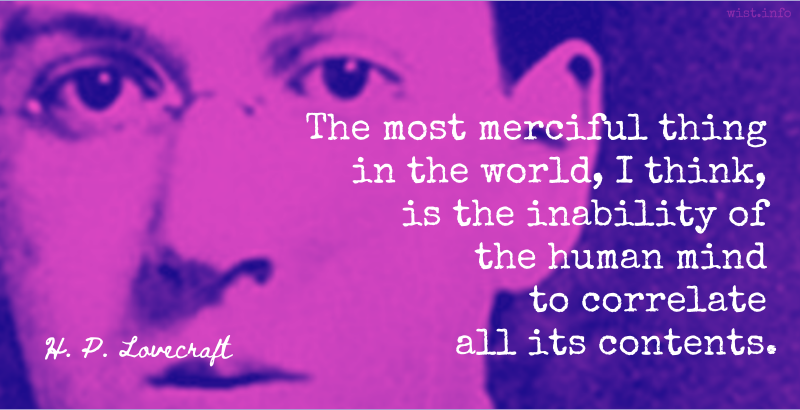 He said the wicked know that if the ill they do be of sufficient horror men will not speak against it. That men have just enough stomach for small evils and only these will they oppose.

It’s probably wrong to believe there can be any limit to the horror which the human mind can experience. On the contrary, it seems that some exponential effect begins to obtain as deeper and deeper darkness falls — as little as one may like to support the idea that when the nightmare grows black enough, horror spawns horror, one coincidental evil begets other, often more deliberate evils, until finally blackness seems to cover everything.

And the most terrifying question of all may be just how much horror the human mind can stand and still maintain a wakeful, staring, unrelenting sanity. That such events have their own Rube Goldberg absurdity goes almost without saying. At some point, it all starts to become rather funny. That may be the point at which sanity begins either to save itself or to buckle and break down; that point at which one’s sense of humor begins to reassert itself.

More to the point, nameless hideous monsters are freaking terrifying. You always fear what you don’t know, what you don’t understand, and the first step to having understanding of something is to know what to call it. It’s a habit of mine to give names to anything I wind up interacting with if it doesn’t have one readily available. Names have power — magically, sure, but far more important, they have psychological power. Something horrible with a name holds less power over you, less terror, than something horrible without one.
“Octokongs,” I pronounced grimly. “Why did it have to be octokongs?”

I think there’s a lot of people out there who say we must not have horror in any form, we must not say scary things to children because it will make them evil and disturbed. … That offends me deeply, because the world is a scary and horrifying place, and everyone’s going to get old and die, if they’re that lucky. To set children up to think that everything is sunshine and roses is doing them a great disservice. Children need horror because there are things they don’t understand. It helps them to codify it if it is mythologized, if it’s put into the context of a story, whether the story has a happy ending or not. If it scares them and shows them a little bit of the dark side of the world that is there and always will be, it’s helping them out when they have to face it as adults.

I shudder as I recall.

Referring to the death of the Trojan priest Laocoön and his sons. (Source (Latin)).

A Degree of Fear sharpeneth, the Excess of it stupifieth.

No catalogue of horrors ever kept men from war. Before the war you always think that it’s not you that dies. But you will die, brother, if you go to it long enough. 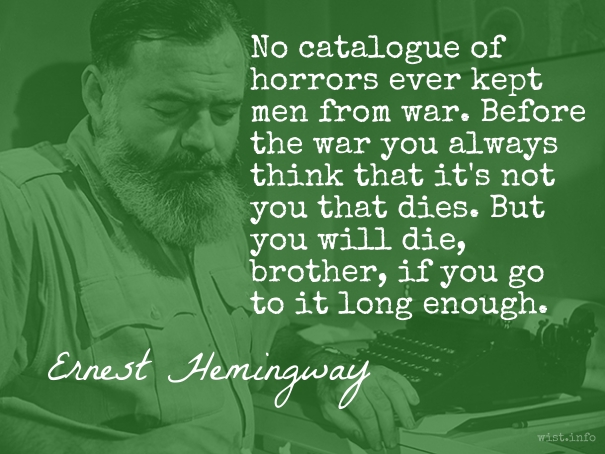