America’s two great specialties are demagogues and rock and roll, and we’ve all heard plenty of both in our time. 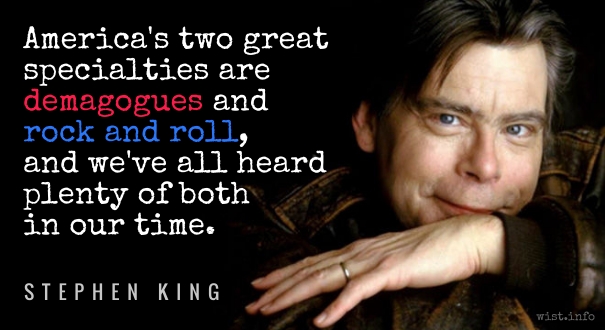 Remember, Hope is a good thing, maybe the best of things, and no good thing ever dies.

Part of my function as a writer is to dream awake. And that usually happens. If I sit down to write in the morning, in the beginning of that writing session and the ending of that session, I’m aware that I’m writing. I’m aware of my surroundings. It’s like shallow sleep on both ends, when you go to bed and when you wake up. But in the middle, the world is gone and I’m able to see better.

Books are the perfect entertainment: no commercials, no batteries, hours of enjoyment for each dollar spent. What I wonder is why everybody doesn’t carry a book around for those inevitable dead spots in life. 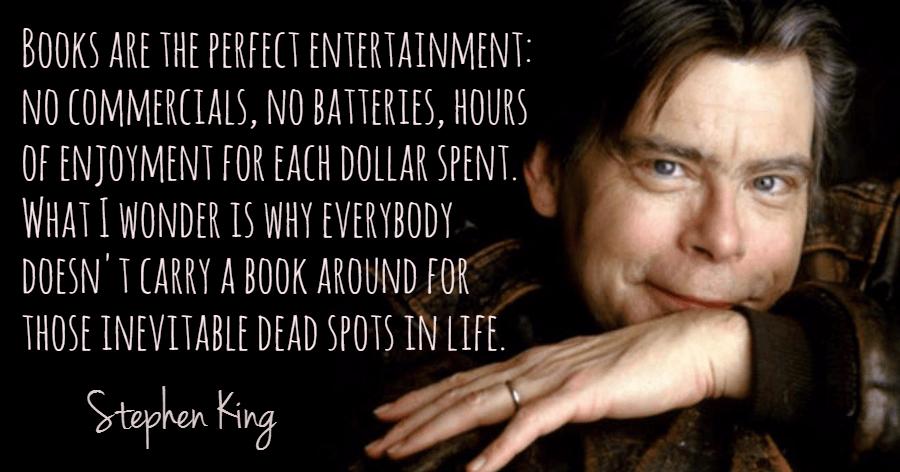 What Darwin was too polite to say, my friends, is that we came to rule the Earth not because we were the smartest, or even the meanest, but because we have always been the craziest, most murderous motherfuckers in the jungle. 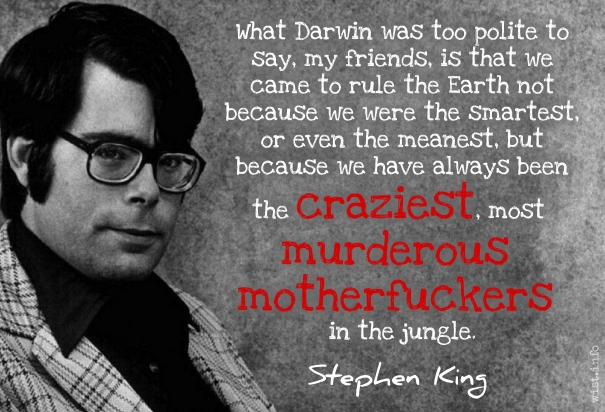 Has it ever occurred to you … that parents are nothing but overgrown kids until their children drag them into adulthood? Usually kicking and screaming? 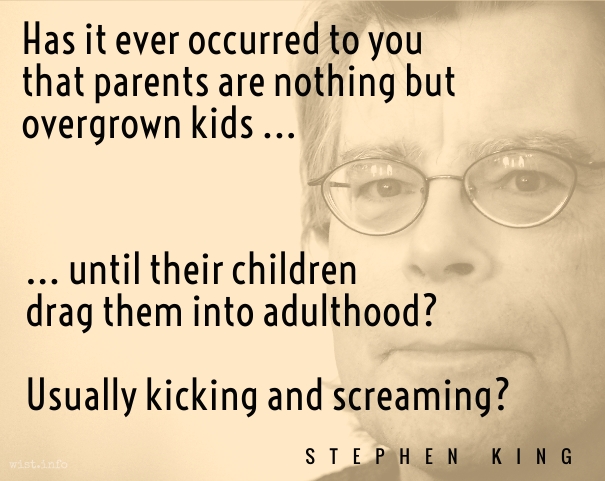 In a book, all would have gone according to plan. … but life was so fucking untidy — what could you say for an existence where some of your most crucial conversations of your life took place when you needed to take a shit, or something? An existence where there weren’t even any chapters?

The devil’s voice is sweet to hear

Books are a uniquely portable magic.

The most important things to remember about backstory are that (a) everyone has a history and (b) most of it isn’t very interesting. Stick to the parts that are, and don’t get carried away with the rest. Life stories are best received in bars, and only then an hour or so before closing time, and if you are buying.

Writing isn’t about making money, getting famous, getting dates, getting laid, or making friends. In the end, it’s about enriching the lives of those who will read your work, and enriching your own life, as well. It’s about getting up, getting well, and getting over. Getting happy, okay? Getting happy. […] Writing is magic, as much the water of life as any other creative art. The water is free. So drink. Drink and be filled up.

I believe the road to hell is paved with adverbs, and I will shout it from the rooftops. To put it another way, they’re like dandelions. If you have one on your lawn, it looks pretty and unique. If you fail to root it out, however, you find five the next day … fifty the day after that … and then, my brothers and sisters, your lawn is totally, completely, and profligately covered with dandelions. By then you see them for the weeds they really are, but by then it’s — GASP!! — too late.

It’s probably wrong to believe there can be any limit to the horror which the human mind can experience. On the contrary, it seems that some exponential effect begins to obtain as deeper and deeper darkness falls — as little as one may like to support the idea that when the nightmare grows black enough, horror spawns horror, one coincidental evil begets other, often more deliberate evils, until finally blackness seems to cover everything.

And the most terrifying question of all may be just how much horror the human mind can stand and still maintain a wakeful, staring, unrelenting sanity. That such events have their own Rube Goldberg absurdity goes almost without saying. At some point, it all starts to become rather funny. That may be the point at which sanity begins either to save itself or to buckle and break down; that point at which one’s sense of humor begins to reassert itself.

She was a grown up now, and she discovered that being a grown up was not quite what she had suspected it would be when she was a child. She had thought then that she would make a conscious decision one day to simply put her toys and games and little make-believes away. Now she discovered that was not what happened at all. Instead, she discovered, interest simply faded. It became less and less and less, until a dust of years drew over the bright pleasures of childhood, and they were forgotten.

That truth is that monsters are real, and ghosts are real, too. They live inside us, and sometimes, they win.

You couldn’t get hold of the things you’d done and turn them right again. Such a power might be given to the gods, but it was not given to women and men, and that was probably a good thing. Had it been otherwise, people would probably die of old age still trying to rewrite their teens.

A cowardly leader is the most dangerous of men.

They pay me absurd amounts of money for something that I would do for free.

I never think of stories as made things; I think of them as found things. As if you pull them out of the ground, and you just pick them up. Someone once told me that that was me low-balling my own creativity. That might or might not be the case. But still, on the story I am working on now, I do have some unresolved problem. It doesn’t keep me awake at nights. I feel like when it comes down, it will be there ….