My choice early in life was either to be a piano-player in a whorehouse or a politician. And to tell the truth, there’s hardly any difference.

Widely quoted in respectable biographies of Truman, but unsourced. Sometimes paraphrased: "Being a politician is like being a piano player in a whorehouse."

Maturity is knowing that just because someone disagrees with you doesn’t mean he’s a horse’s ass.

It is amazing what you can accomplish if you do not care who gets the credit.

There is nothing contemporary to Truman indicating this is a valid quotation of his. The earliest instance of crediting Truman seems to be by Hugh Sidey in Time (7 Nov 1988).

A variant of this quote was also attributed to Ronald Reagan, apparently due to a plaque he kept in his office:

There is no limit to what a man can do or where he can go if he does not mind who gets the credit.

More discussion of the quote and its actual origins going back to 1863: A Man May Do an Immense Deal of Good, If He Does Not Care Who Gets the Credit – Quote Investigator. See also Montague.

To be President of the United States is to be lonely, very lonely at times of great decisions.

Within the first few months I discovered that being a President is like riding a tiger. A man has to keep riding or be swallowed. The fantastically crowded nine months of 1945 taught me that a President either is constantly on top of events or, if he hesitates, events will soon be on top of him. I never felt I could let up for a single moment.

We have gone a long way toward civilization and religious tolerance, and we have a good example in this country. Here the many Protestant denominations, the Catholic Church and the Greek Orthodox Church do not seek to destroy one another in physical violence just because they do not interpret every verse of the Bible in exactly the same way. Here we now have the freedom of all religions, and I hope that never again will we have a repetition of religious bigotry, as we have had in certain periods of our own history. There is no room for that kind of foolishness here.

There has been a lot of talk lately about the burdens of the Presidency. Decisions that the President has to make often affect the lives of tens of millions of people around the world, but that does not mean that they should take longer to make. Some men can make decisions and some cannot. Some men fret and delay under criticism. I used to have a saying that applies here, and I note that some people have picked it up, “If you can’t stand the heat, get out of the kitchen.”

I have tried my best to give the nation everything I had in me. There are probably a million people who could have done the job better than I did it, but I had the job and I had to do it, and I always quote an epitaph on a tombstone in Tombstone, Ariz.: “Here lies Jack Williams. He done his damnedest.”

Speaking in Winslow, AZ (15 Jun 1948), Truman said, "You know, the greatest epitaph in the country is here in Arizona. It’s in Tombstone, Ariz., and this epitaph says, 'Here lies Jack Williams. He done his damndest.' I think that is the greatest epitaph a man could have."

He’ll sit right here and he’ll say, “Do this! Do that!” And nothing will happen. Poor Ike — it won’t be a bit like the army. He’ll find it very frustrating.

I’m going to make a common-sense, intellectually honest campaign. It will be a novelty and it will win.

Put an underdog on top and it makes no difference whether his name is Russian, Jewish, Negro, Management, Labor, Mormon, or Baptist he goes haywire. I’ve found very, very few who remember their past condition when prosperity comes.

To hell with them. When history is written they will be the sons of bitches — not I.


On criticism from the "sabotage press." Full text.

I fired him because he wouldn’t respect the authority of the president. That’s the answer to that. I didn’t fire him because he was a dumb son of a bitch, although he was, but that’s not against the law for generals. If it was, half to three-quarters of them would be in jail.

On removing General Douglas MacArthur from command on April 11, 1951.

The only thing I learned out of the whole MacArthur deal is that when you feel there’s something you have to do and you know in your gut you have to do it, the sooner you get it over with, the better off everybody is.

I have found the best way to give advice to your children is to find out what they want and then advise them to do it.

Whenever you have an efficient government you have a dictatorship.

I don’t believe in anti-anything. A man has to have a program; you have to be for something, otherwise you will never get anywhere.

The people can never understand why the President does not use his powers to make them behave. Well all the president is, is a glorified public relations man who spends his time flattering, kissing, and kicking people to get them to do what they are supposed to do anyway.

To permit freedom of expression is primarily for the benefit of the majority, because it protects criticism, and criticism leads to progress.

I am the President of the most powerful nation in the world. I take orders from nobody, except photographers.

Boys, if you ever pray, pray for me now. I don’t know whether you fellows ever had a load of hay fall on you, but when they told me yesterday what had happened, I felt like the moon, the stars and all the planets had fallen on me. I’ve got the most terribly responsible job a man ever had.

On having become president the previous day, upon Franklin Roosevelt's death.

Once a government is committed to the principle of silencing the voice of opposition, it has only one way to go, and that is down the path of increasingly repressive measures, until it becomes a source of terror to all its citizens and creates a country where everyone lives in fear.

Truman used this phrase multiple times in his speech and writing:

All of you, I am sure, have heard many cries about Government interference with business and about “creeping socialism.” I should like to remind the gentlemen who make these complaints that if events had been allowed to continue as they were going prior to March 4, 1933, most of them would have no businesses left for the Government or for anyone else to interfere with — and almost surely we would have socialism in this country, real socialism.

No government is perfect. One of the chief virtues of a democracy, however, is that its defects are always visible and under democratic processes can be pointed out and corrected.

The Wall Street reactionaries are not satisfied with being rich. They want to increase their power and privileges, regardless of what happens to the other fellow. They are gluttons of privilege.

The legislative job of the President is especially important to the people who have no special representatives to plead their cause before Congress — and that includes the great majority. The President is the only lobbyist that 150 million Americans have. The other 20 million are able to employ people to represent them — and that’s all right, it’s the exercise of the right of petition — but someone has to look after the interests of the 150 million that are left.

The reactionaries hold that government policies should be designed for the special benefit of small groups of people who occupy positions of wealth and influence. Their theory seems to be that if these groups are prosperous, they will pass along some of their prosperity to the rest of us. This can be described as the “trickle down theory.”

Taft explained that the great issue in this campaign is “creeping socialism.” Now that is the patented trademark of the special interest lobbies. 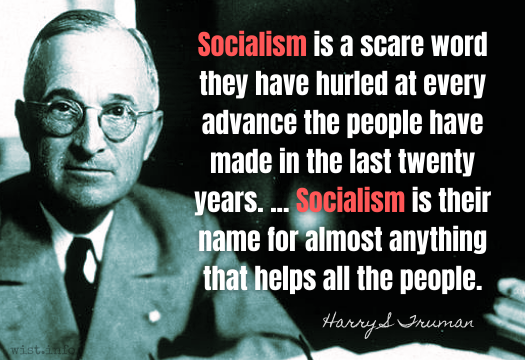 Whenever the press quits abusing me I know I’m in the wrong pew. I don’t mind it because when they throw bricks at me — I’m a pretty good shot myself and I usually throw ’em back at ’em.

Every segment of our population and every individual has a right to expect from his government a fair deal.