The superior man in everything considers righteousness to be essential. He performs it according to the rules of propriety. He brings it forth in humility. He completes it with sincerity. This is indeed a superior man.

When the "superior man" regards righteousness as the thing material, gives operation to it according to the rules of propriety, lets it issue in humility, and become complete in sincerity, -- there indeed is your superior man!
[tr. Jennings (1895), 15.17]

A wise and good man makes Right the substance of his being; he cries it out with judgment and good sense; he speaks it with modesty; and he attains it with sincerity: -- such a man is a really good and wise man!
[tr. Ku Hung-Ming (1898), 15.17]

The noble man takes the Right as his foundation principle, reduces it to practice with all courtesy, carries it out with modesty, and renders it perfect with sincerity, -- such is the noble man.
[tr. Soothill (1910), 15.17]

The proper man gives substance to his acts by equity. He proceeds according to the rites, puts them forth modestly, and makes them perfect by sticking to his word. That's the proper man (in whom's the voice of his forebears).
[tr. Pound (1933), 15.17]

The gentleman who takes the right as his material to work upon and ritual as the guide in putting what is right into practice, who is modest in setting out his projects and faithful in carrying them to their conclusions, he indeed is a true gentleman.
[tr. Waley (1938), 15.17]

The gentleman has morality as his basic stuff and by observing the rites puts it into practice, by being modest gives it expression, and by being trustworthy in word brings it to completion. Such is a gentleman indeed!
[tr. Lau (1979)]

Righteousness the gentleman regards as the essential stuff and the rites are his means of putting it into effect. If modesty is the quality with which he reveals it and good faith is his method of bringing it to completion, he is indeed a gentleman.
[tr. Dawson (1993)]

A gentleman takes justice as his basis, enacts it in conformity with the ritual, expounds it with modesty, and through good faith, brings it to fruition. That is how a gentleman proceeds.
[tr. Leys (1997)]

A gentleman takes the righteousness as his essence, practices with the rituals, words with modesty, and gets achievement with honesty. It is the gentleman.
[tr. Cai/Yu (1998), v. 402]

Having a sense of appropriate conduct [yi] as one's basic disposition [zhi], developing it in observing ritual propriety [li], expressing it with modesty, and consummating it in making good on one's word [xin]; this then is an exemplary person [junzi].
[tr. Ames/Rosemont (1998)]

If a gentleman has right as his substance, and puts it in practice with propriety, promulgates it with lineality, and brings it to a conclusion with fidelity, he is a gentleman indeed!
[tr. Brooks/Brooks (1998), LY17 c0270 addition]

The noble-minded make Duty their very nature. They put it into practice through Ritual; they make it shine through humility; and standing by their words, they perfect it. Then they are noble-minded indeed!
[tr. Hinton (1998)]

The gentleman takes rightness as his substance, puts it into practice by means of ritual, gives it expression through modesty, and perfects it by being trustworthy. Now that is a gentleman!
[tr. Slingerland (2003)]

The gentleman makes rightness the substance, practices it through ritual, displays it with humility, brings it to completion with trustworthiness. That’s the gentleman.
[tr. Watson (2007)]

The gentleman makes rightness the substance. He works at it through ritual propriety; he expresses it with modesty; he brings it to completion by being trustworthy. Now that is a gentleman!
[tr. Annping Chin (2014)]

A Jun Zi regards righteousness and honor as fundamental bases, acts in line with Li, shows humility, delivers promises, and completes contracts with sincerity and trust. If so, he is indeed a Jun Zi.
[tr. Li (2020)]

A leader takes rightness as their essence, puts it into practice through ritual, manifests it through humility, and brings it to fruition through trustworthiness. This is how a leader behaves.
[tr. Brown (2021)]

As a field, though fertile, cannot yield a harvest without cultivation, no more can the mind without learning.

Often rendered in reverse order: "A mind without instruction can no more bear fruit than can a field, however fertile, without cultivation." (e.g., 1906). Original Latin. Alternate translations:

As a Field, though it be Fruitful, without Tillage cannot bring a good Crop, so the Soul without Learning.
[tr. Wase (1643)]

As the field naturally fruitful cannot produce a crop, without dressing, so neither can the mind, without improvement.
[tr. Main (1824)]

As the field, however fertile, cannot be fruitful without culture, so with the mind, without learning.
[tr. Otis (1839)]

As a field, although it may be naturally fruitful cannot produce a crop, without dressing, so neither can the mind, without education.
[tr. Yonge (1853)]

Just as a field however fertile cannot be fruitful without cultivation, neither can the soul without instruction.
[tr. Douglas (1990)]

Just as a field, however fertile, cannot be productive without cultivation, so the soul cannot be without teaching.
[tr. Davie (2017)]

The world is not interested in the storms you encountered, but did you bring in the ship?

There are so many things that we wish we had done yesterday, so few that we feel like doing today.

Do the best you can where you are; and, when that is accomplished, God will open a door for you, and a voice will call, “Come up hither into a higher sphere.”

The real and lasting victories are those of peace and not of war.

Every man is in some sort a failure to himself. No one ever reaches the heights to which he aspires.

When I go into my garden with a spade and dig a bed, I feel such an exhilaration and health, that I discover that I have been defrauding myself all this time in letting others do for me what I should have done with my own hands.

A person who has not done one half his day’s work by ten o’clock runs a chance of leaving the other half undone.

It is not yours to finish the task, but neither are you free to set it aside. 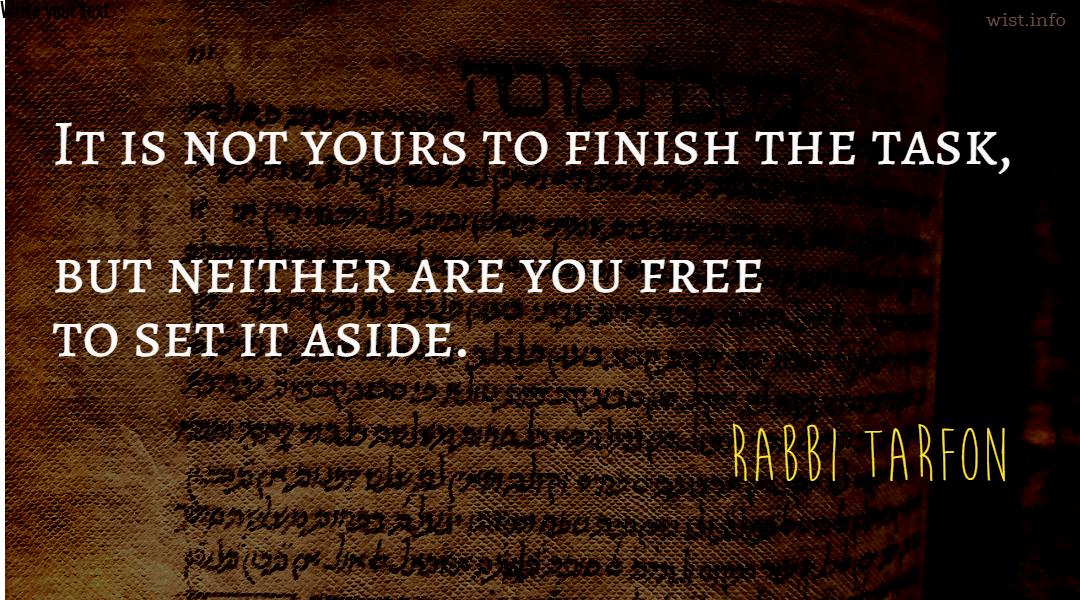 Variant: "If you spend your days doing what you love, it is impossible to fail. So I go about my days trying to bring something into the world that wasn’t in the world before. And then everyone gets furious about it. And then I sit back and say, 'I did that!'" [Biography interview (11 Jan 2016)]

Added on 11-May-16 | Last updated 11-May-16
Link to this post | No comments
Topics: accomplishment, art, creation, creativity, make
More quotes by Gervais, Ricky

Happy the man, and happy he alone,
He, who can call to-day his own:
He who, secure within, can say,
Tomorrow do thy worst, for I have lived today.

We are very near to greatness: one step and we are safe: can we not take the leap? 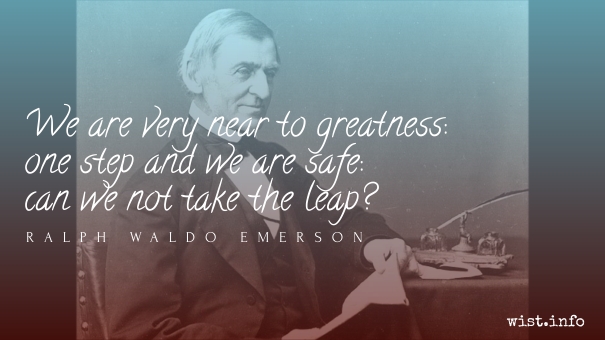 Quoted in Reader's Digest (Nov 1939), but without citation. The sentiment has a number of antecedents (see discussion here).

Every great improvement has come after repeated failures. Virtually nothing comes out right the first time. Failures, repeated failures, are finger posts on the road to achievement. One fails forward toward success.

The world is divided into people who do things and people who get the credit. Try, if you can, to belong to the first class. There’s far less competition.

Can anything be sadder than work left unfinished? Yes: work never begun.

There are many who find a good alibi far more attractive than an achievement. For an achievement does not settle anything permanently. We still have to prove our worth anew each day: we have to prove that we are as good today as we were yesterday. But when we have a valid alibi for not achieving anything we are fixed, so to speak, for life. Moreover, when we have an alibi for not writing a book, painting a picture, and so on, we have an alibi for not writing the greatest book and not painting the greatest picture. Small wonder that the effort expended and the punishment endured in obtaining a good alibi often exceed the effort and grief requisite for the attainment of a most marked achievement.

Every man who is high up loves to think that he has done it all himself; and the wife smiles, and lets it go at that.

I may not have gone where I intended to go, but I think I have ended up where I needed to be.

Look at a day when you are supremely satisfied at the end. It is not a day when you lounge around doing nothing: it’s when you’ve had everything to do, and you’ve done it.

There is no limit to what a man can do so long as he does not care a straw who gets the credit for it.

Montague did not take credit for the phrase, referring to it as a saying.

This was not the first time Montague used the phrase. In a memoir about journalist William T. Arnold in 1906, he stated that a phrase that "someone has said" was a particular favorite of Arnold's: "There is no limit to what a man can do who does not care who gains the credit for it."

More discussion of the quote and its origins: A Man May Do an Immense Deal of Good, If He Does Not Care Who Gets the Credit – Quote Investigator. See also Truman.

For a thing to remain undone nothing more is needed than to think it done.

To accomplish great things we must not only act, but also dream, not only plan, but also believe.

Like it or not we live in interesting times. They are times of danger and uncertainty; but they are also more open to the creative energy of men than any other time in history. And everyone here will ultimately be judged — will ultimately judge himself — on the effort he has contributed to building a new world society and the extent to which his ideals and goals have shaped that effort.

You can’t do the biggest things in this world unless you handle men; and you can’t handle men if you’re not in sympathy with them; and sympathy begins in humility.

Promise Little, and do Much; so shalt thou have Thanks.

No pain, no palm;
No thorns, no throne;
No gall, no glory;
No cross, no crown.

Some are very busy, and yet do nothing.

Not failure, but low aim, is crime.

We judge ourselves by what we feel capable of doing, while others judge us by what we have already done.

It is amazing what you can accomplish if you do not care who gets the credit.

There is nothing contemporary to Truman indicating this is a valid quotation of his. The earliest instance of crediting Truman seems to be by Hugh Sidey in Time (7 Nov 1988).

A variant of this quote was also attributed to Ronald Reagan, apparently due to a plaque he kept in his office:

There is no limit to what a man can do or where he can go if he does not mind who gets the credit.

More discussion of the quote and its actual origins going back to 1863: A Man May Do an Immense Deal of Good, If He Does Not Care Who Gets the Credit – Quote Investigator. See also Montague.