Then welcome fate!
‘Tis true I perish, yet I perish great:
Yet in a mighty deed I shall expire,
Let future ages hear it, and admire! 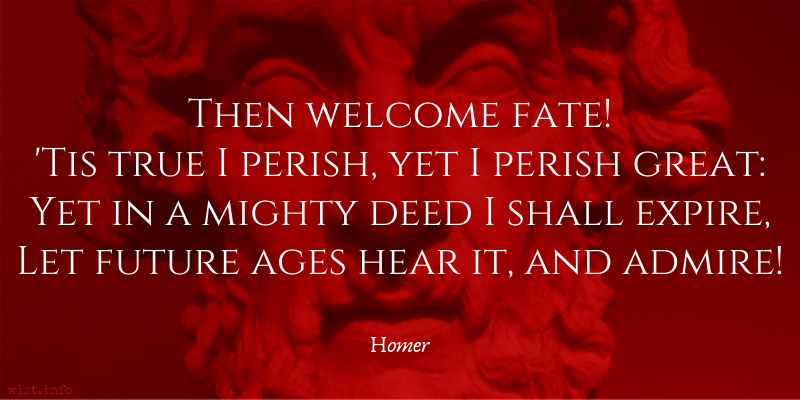 But Fate now conquers; I am hers; and yet not she shall share
In my renown; that life is left to every noble spirit,
And that some great deed shall beget that all lives shall inherit.
[tr. Chapman (1611), l. 266ff]

But I will not fall
Inglorious; I will act some great exploit
That shall be celebrated ages hence.
[tr. Cowper (1791), l. 347ff]

Fate overtakes me. Nevertheless I will not perish cowardly and ingloriously at least, but having done some great deed to be heard of even by posterity.
[tr. Buckley (1860)]

My fate hath found me now.
Yet not without a struggle let me die,
Nor all inglorious; but let some great act,
Which future days may hear of, mark my fall.
[tr. Derby (1864)]

Now my fate hath found me. At least let me not die without a struggle or ingloriously, but in some great deed of arms whereof men yet to be born shall hear.
[tr. Leaf/Lang/Myers (1891)]

My doom has come upon me; let me not then die ingloriously and without a struggle, but let me first do some great thing that shall be told among men hereafter.
[tr. Butler (1898)]

Now again is my doom come upon me. Nay, but not without a struggle let me die, neither ingloriously, but in the working of some great deed for the hearing of men that are yet to be.
[tr. Murray (1924)]

But now my death is upon me. Let me at least not die without a struggle, inglorious, but do some big thing first, that men to come shall know of it.
[tr. Lattimore (1951)]

But now has my doom overcome me. But let me at least not die without making a fight, without glory, but a great deed having done for the men of the future to hear of.
[tr. Merrill (2007)]

May I not die without a fight and without glory
but after doing something big for men to come to learn about.
[tr. @Sentantiq (2011)]