History is a jangle of accidents, blunders, surprises and absurdities, and so is our knowledge of it, but if we are to report it at all we must impose some order upon it.

“Yes,” he said. “But I wonder … I’ve a peculiar feeling that I may never see you again. It is as if I were one of those minor characters in a melodrama who gets shuffled offstage without ever learning how things turn out.”

“I can appreciate the feeling,” I said. “My own role sometimes makes me want to strangle the author. But look at it this way: inside stories seldom live up to one’s expectations. Usually they are grubby little things, reducing down to the basest of motives when all is known. Conjectures and illusions are often the better possessions.”

It is never quite safe to think we have done with life. When we imagine we have finished our story fate has a trick of turning the page and showing us yet another chapter.

A person, an individual being, has a thousand ways of conveying his feelings and thoughts. He is riches without end, he is a world in which we can always discover something new. A crowd, on the other hand, reduces the individuality of the person; a man in a crowd limits himself to a few forms of elementary behavior. The forms through which a crowd can express its yearnings are extraordinarily meager and continually repeat themselves: the demonstration, the strike, the rally, the barricades. That is why you can write a novel about a man, but about a crowd — never.

The whole truth would be an infinite concatenation of mostly irrelevant facts, with an occasional dose of, in textspeak, “TMI,” too much information — when, for example, you ruin the case you were making against factory farming by going into such detail about how painful de-beaking is for chickens that your listener shuts you out and struggles to think about something else. So we do not tell the whole truth; we tell carefully crafted stories, and we do this even when our moral purpose is to tell the truth.

Justin E. H. Smith (b. 1972) American-Canadian professor of history and philosophy of science
Irrationality: A History of the Dark Side of Reason, ch. 8 (2019)
(Source)

History is not another name for the past, as many people imply. It is the name for stories about the past.

Nobody knows what is going to happen because so much depends on an enormous number of variables, on simple hazard. On the other hand if you look at history retrospectively, then, even though it was contingent, you can tell a story that makes sense. … Jewish history, for example, in fact had its ups and downs, its, enmities and its friendships, as every history of all people has. The notion that there is one unilinear history is of course false. But if you look at it after the experience of Auschwitz it looks as though all of history — or at least history since the Middle Ages — had no other aim than Auschwitz. … This, is the real problem of every philosophy of history how: is it possible that in retrospect it always looks as though it couldn’t have happened otherwise?

We are each the star of our own situation comedy, and, with luck, the screwball friend in someone else’s.

I have regarded you, not as a novelist, but as an historian; for it is my considered opinion, unshaken at 85, that records of fact are not history. They are only annals, which cannot become historical until the artist-poet-philosopher rescues them from the unintelligible chaos of their actual occurrence and arranges them in works of art.

When people ask me what has happened in my long lifetime I do not refer them to the newspaper files and to the authorities, but to your novels. They object that the people in your books never existed; that their deeds were never done and their sayings never uttered. I assure them that they were, except that Upton Sinclair individualized and expressed them better than they could have done, and arranged their experiences, which as they actually occurred were as unintelligible as pied type, in significant and intelligible order.

If you are silent about your pain, they’ll kill you and say you enjoyed it.

Sometimes reality is too complex. Stories give it form.

ADVICE TO PERSONS ABOUT TO WRITE HISTORY — DON’T.

In the Moral Sciences Prejudice is Dishonesty.

A Historian has to fight against temptations special to his mode of life, temptations from Country, Class, Church, College, Party, Authority of talents, solicitation of friends.

The most respectable of these influences are the most dangerous.

The historian who neglects to root them out is exactly like a juror who votes according to his personal likes or dislikes.

In judging men and things Ethics go before Dogma, Politics or Nationality.

The Ethics of History cannot be denominational.

Judge not according to the orthodox standard of a system religious, philosophical, political, but according as things promote, or fail to promote the delicacy, integrity, and authority of Conscience.

Put conscience above both system and success.

History provides neither compensation for suffering nor penalties for wrong.

The present, as historians well know, re-creates the past. This is partly because, once we know how things have come out, we tend to rewrite the past in terms of historical inevitability. 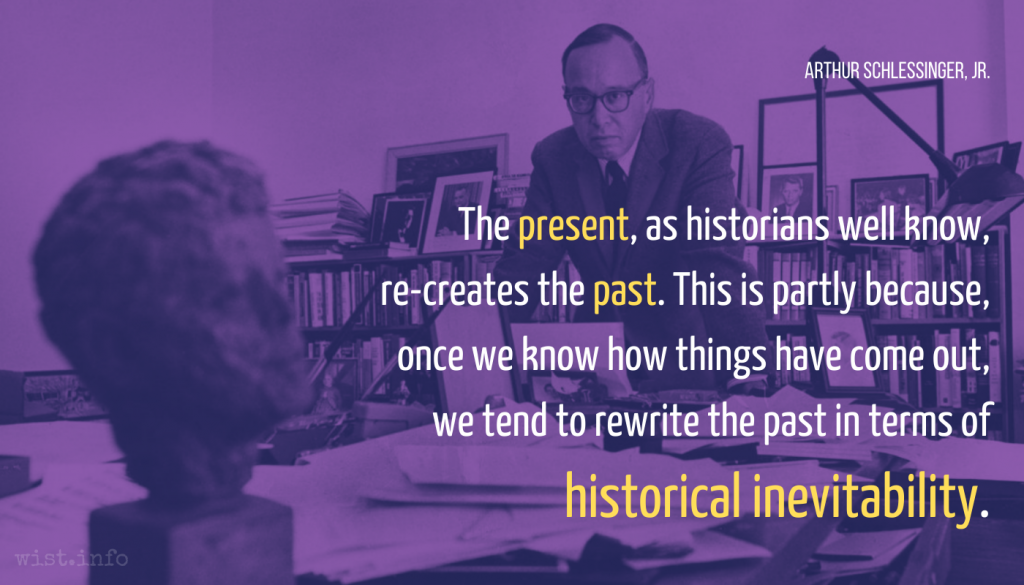