The noble-minded worry about their lack of ability, not about people’s failure to recognize their ability.

The proper man is irritated by his incapacities, not irritated by other people not recognizing him.
[tr. Pound (1933), 15.18]

A gentleman is distressed by his own lack of capacity; he is never distressed at the failure of others to recognize his merits.
[tr. Waley (1938), 15.18]

The gentleman is troubled by his own lack of ability, not by the failure of others to appreciate him.
[tr. Lau (1979)]

The gentleman is pained at the lack of ability within himself; he is not pained at the fact that others do not appreciate him.
[tr. Dawson (1993)]

A gentleman resents his incompetence; he does not resent his obscurity.
[tr. Leys (1997)]

The gentleman worries about his incapability; he does not worry about men not knowing him.
[tr. Huang (1997)]

A gentleman worries about that he does not have the ability, does not worrya bout that others do not understand him.
[tr. Cai/Yu (1998), #403]

Exemplary persons (junzi) are distressed by their own lack of ability, not by the failure of others to acknowledge them.
[tr. Ames/Rosemont (1998)]

The gentleman is distressed by his own inability, rather than the failure of others to recognize him.
[tr. Slingerland (2003)]

The gentleman is troubled by his own lack of ability. He is not troubled by the fact that others do not understand him.
[tr. Watson (2007)]

The gentleman is worried about his own lack of ability and not about the fact that others do not appreciate him.
[tr. Chin (2014)]

A Jun Zi is disappointed about his own incompetency. He is not distressed that he is not known by others.
[tr. Li (2020)]

It is our choices, Harry, that show what we truly are, far more than our abilities.

It might be argued that a man who employs this kind of skill with words for immoral purposes can do great harm, but the same goes for everything good except for virtue, and it goes above all for the most valuable things, such as strength, health, and generalship. After all, moral use of these things can do the greatest good, and immoral use the greatest harm.

But if it be urged that a man, using such a power of words for an unjust purpose, would do much harm, this is common to all the goods, with the exception of virtue; and especially in the case of the most useful, as for instance strength, health, wealth, and command: for by the right use of these a man may do very much good, and by the wrong very much harm.
[Source (1847)]

If, however, any one should object that a person, unfairly availing himself of such powers of speaking, may be, in a very high degree, injurious; this is an objection which will like in some degree against every good indiscriminately, except virtue; and with especial force against those which are most advantageous, as strength, health, wealth, and generalship. Because employing these fairly, a person may be beneficial in points of the highest importance; and by employing them unfairly may be equally injurious.
[tr. Buckley (1850)]

If it is objected that the abuser of the rhetorical faculty can do great mischief, this, at any rate, applies to all good things except virtue, and especially to the most useful things, as strength, health, wealth, generalship. By the right use of these things a man may do the greatest good, and by the unjust use, the greatest mischief.
[tr. Jebb (1873)]

And if it be objected that one who uses such power of speech unjustly might do great harm, that is a charge which may be made in common against all good things except virtue, and above all against the things that are most useful, as strength, health, wealth, generalship. A man can confer the greatest of benefits by a right use of these, and inflict the greatest of injuries by using them wrongly.
[tr. Roberts (1924)]

If it is argued that one who makes an unfair use of such faculty of speech may do a great deal of harm, this objection applies equally to all good things except virtue, and above all to those things which are most useful, such as strength, health, wealth, generalship; for as these, rightly used, may be of the greatest benefit, so, wrongly used, they may do an equal amount of harm.
[tr. Freese (1926)]

And if someone using such a capacity for argument should do great harm, this at least, is common to all good things -- except virtue -- and especially so in the case of the most useful things, such as strength, health, wealth, and generalship. For someone using these things justly would perform the greatest benefits -- and unjustly, the greatest harm.
[tr. Bartlett (2019)]

In art as in lovemaking, heartfelt ineptitude has its appeal and so does heartless skill, but what you want is passionate virtuosity. 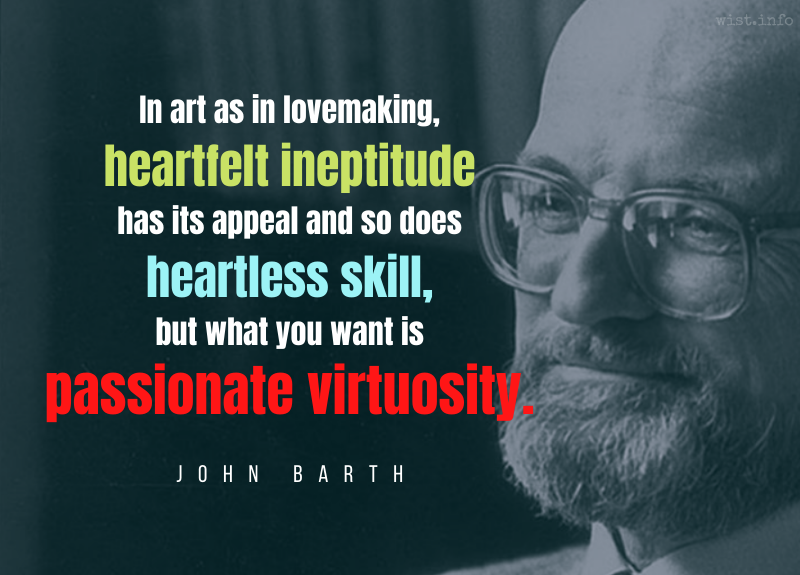 Quoted as such in the introductory materials, without specific citation. Barth used the phrase on multiple occasions, including:

Yet I think that to all living things there is a pleasure in the exercise of their energies, and that even beasts rejoice in being lithe and swift and strong. But a man at work, making something which he feels will exist because he is working at it and wills it, is exercising the energies of his mind and soul as well as of his body. Memory and imagination help him as he works. Not only his own thoughts, but the thoughts of the men of past ages guide his hands; and, as a part of the human race, he creates. If we work thus we shall be men, and our days will be happy and eventful.

Wings are freedom only when they are wide open in flight. On one’s back they are a heavy weight.

Literally "Wings -- freedom, only when opened in flight, behind their backs -- heavy."

The fox knows many things, but the hedgehog knows one big thing.

As quoted in Isaiah Berlin, The Hedgehog and the Fox (1953). The fragment is found in a group of proverbs collected by Zenobius. Alt. trans.:

Ability is a poor man’s wealth.

The Abilities of Man must fall short on one side or other, like too scanty a Blanket when you are a-bed. If you pull it upon your Shoulders, you leave your Feet bare; if you thrust it down upon your Feet, your Shoulders are uncovered.

I believe that happiness consists in having a destiny in keeping with our abilities. Our desires are things of the moment, often harmful even to ourselves; but our abilities are permanent, and their demands never cease.

Ability is not something to be saved, like money, in the hope that you can draw interest on it. The interest comes from the spending. Unused ability, like unused muscles, will atrophy.

Added on 14-Aug-17 | Last updated 14-Aug-17
Link to this post | No comments
Topics: ability, atrophy, exercise, skill, talent, use it or lose it
More quotes by Roosevelt, Eleanor

There is only one proof of ability — action. 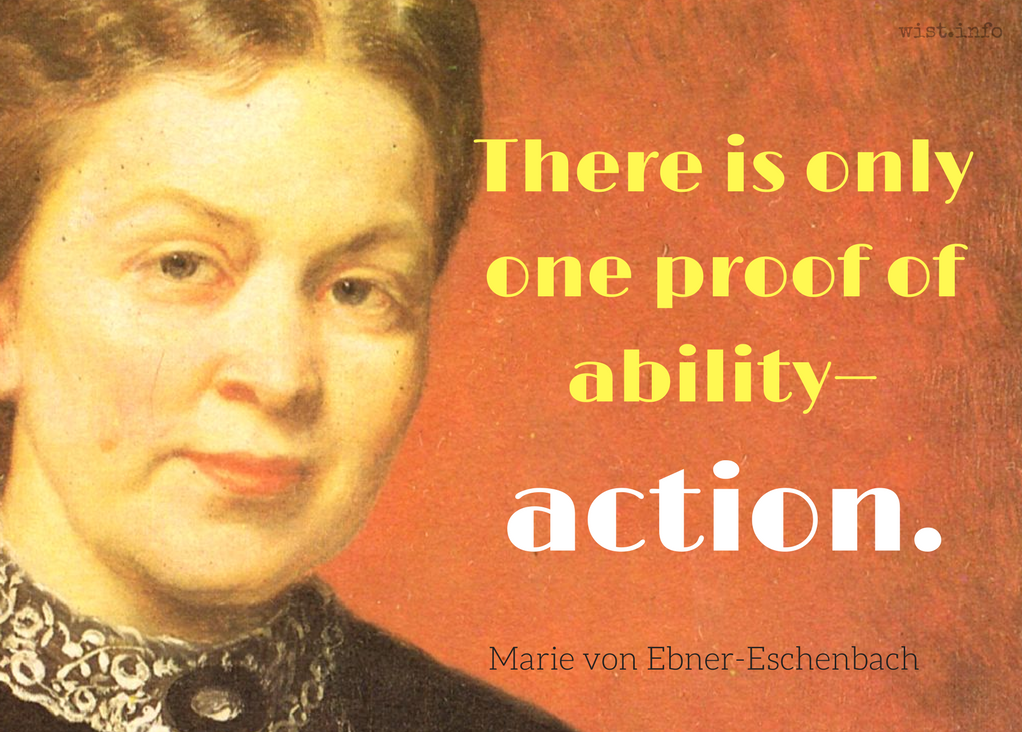 He is a man of splendid abilities, but utterly corrupt. He shines and stinks like rotten mackerel by moonlight.

Comment on Edward Livingson, quoted in W. Cabell Bruce, John Randolph of Roanoke, Vol. 2 (1923). Sometimes incorrectly given as an attack on Henry Clay.

Native ability without education is like a tree which bears no fruit.

Would that my ability was equal to my inclination.

It is a very rare thing for a man of talent to succeed by his talent.

Never make fun of someone who speaks broken English. It means they know another language. 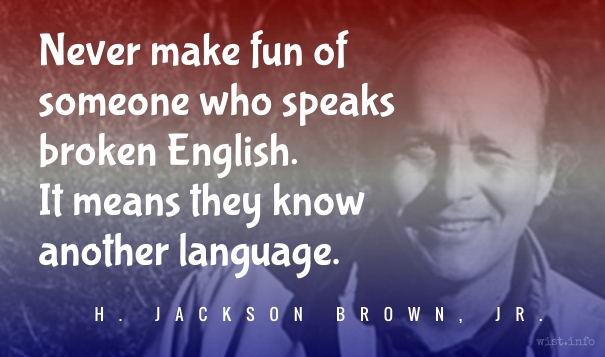 Back then I wanted to be right about my estimate of my abilities. Now I want to be wrong.

An able man shows his Spirit by gentle words and resolute actions.

Labeled as letter #297 in the linked source, but #298 in the volume I am using as reference, which does not include the maxims.

As we can learn from every man or woman or child around us when, touched and moved, they tell of something they loved or hated this day, yesterday, or some other day long past. At a given moment, the fuse, after sputtering wetly, flares and the fireworks begin. Oh, it’s limping crude hard work for many, with language in their way. But I have heard farmers tell about their very first wheat crop on their first farm after moving from another state, and if it wasn’t Robert Frost talking, it was his cousin, five times removed. I have heard locomotive engineers talk about America in the tones of Thomas Wolfe who rode our country with his style as they ride it in their steel. I have heard mothers tell of the long night with their firstborn when they were afraid that they and the baby might die. And I have heard my grandmother speak of her first ball when she was seventeen. And they were all, when their souls grew warm, poets.

Washington reused material in various speeches he gave. In an address to the African Methodist Episcopal Zion Church, Boston (30 July 1903), he phrased this: "The world cares very little what you or I know, but it does care a great deal about what you or I do."

There’s many a good tune played on an old fiddle.

If we attend continually and promptly to the little that we can do, we shall ere long be surprised to find how little remains that we cannot do.