You see we make our writers into something very strange. […] We destroy them in many ways. First, economically. They make money. It is only by hazard that a writer makes money although good books always make money eventually. Then our writers when they have made some money increase their style of living and are caught. They have to write to keep up their establishment, their wives, and so on, and they write slop. It is slop not on purpose but because it is hurried. Because they are ambitious. Then, once they have betrayed themselves, they justify it and you get more slop. Or else they read the critics. If they believe the critics when they say they are great then they must believe them when they say they are rotten and they lose confidence. At present we have two good writers who cannot write because they have lost confidence through reading the critics. If they wrote, sometimes it would be good and sometimes not so good and sometimes it would be quite bad, but the good would get out. But they have read the critics, and they must write masterpieces. The masterpieces the critics said they wrote. They weren’t masterpieces, of course. They were just quite good books. So now they cannot write at all. The critics have made them impotent.

Gaurus, you claim that since my poems please by brevity, my talent’s second-rate.
I grant they’re short. But you who write twelve books on Priam’s mighty battles, are you great?
I make small boys of bronze, who live and play;
you, great one, make a giant out of clay.

Gaurus approves my wit but slenderly,
'Cause I write verse that please for brevity:
But he in twenty volumes drives a trade
Of Priam's wars. Oh, he's a mighty blade!
We give an elegant young pigmy birth,
He makes a dirty giant all of earth.
[tr. Fletcher (c. 1650)]

I am no genius, you affirm: and why?
Because my verses please by brevity.
But you, who twice ten ponderous volumes write
Of mighty battles, are a man of might.
Like Prior's bust, my work is neat, but small:
Yours like the dirty giants in Guildhall.
[tr. Hay (1755), ep. 51]

My pigmy-genius, you, grand bard, despise;
Because, by brevity, my verses rise.
But you, who Priam's battles dire endite,
In twice ten volumes wax a weighty wight:
We form a Brutus' boy, bid Lagon live;
And you a giant huge, of death-cold clay, do give.
[tr. Elphinston (1782), Book 3, ep. 28]

You pretend to consider my talent as small, Gaurus, because I write poems which please by being brief. I confess that it is so; while you, who write the grand wars of Priam in twelve books, are doubtless a great man. I paint the favourite of Brutus, and Langon, to the life. You, great artist, fashion a giant in clay.
[tr. Bohn's Classical (1859)]

You declare my genius slight;
Say the songs are short I write
And so the people rush to buy them in a flood.
Think you, Gaurus, yours is great
Since in six tomes you narrate
Old Priam's awful fight 'mid seas of blood?
Though they're boys whom I portray,
They're made boys who live and play.
The Giants you create are made of mud.
[tr. Nixon (1911), "Of the Quality"]

You prove to me, Gaurus, that my genius is in this way a purny one, because I make poems that please by their brevity. I confess it. But you, who in twice six books write of Priam's wars in grand style, are you a great man? I make Brutus' boy, I make Langon live: you, great man as you are, Gaurus, make a giant of clay.
[tr. Ker (1920)]

But little, Gaurus, you account my wit,
Because with brevity I season it.
Quite true, and you, who of old Priam prate
Though twelve long books, are to be reckoned great.
I make a dwarf of living flesh and blood,
You, great one, make a giant, but of mud.
[tr. Francis & Tatum (1924), ep. 470]

You pontificate my talent is small,
Gaurus, because my epigrams are all
Just puny trifles. Yet they seem to please,
I'll confess. They're a veritable breeze
Compared to your epic tome, which rattles,
In twelve mortal books, o'er Priam's battles.
That makes you big man on campus? Oh no!
As statuettes of master carvers glow
With life, so do my tiny dramas boast
Vital creatures. Your giants? Clay, at most.
[tr. Schmidgall (2001)]

Good work you’ll find, some poor, and much that’s worse,
It takes all sorts to make a book of verse.

Some things are good, indifferent some, some naught,
You read: a book can't otherwise be wrote.
[tr. Anon. (1695)]

Of the epigrams which you read here, some are good, some middling, many bad: a book, Avitus, cannot be made in any other way.
[tr. Bohn's Classical (1859)]

There are good things, there are some indifferent, there are more things bad that you read here. Not otherwise, Avitus, is a book produced.
[tr. Ker (1919)]

Some of my poems are good, some
not up to scratch, some
bad.
That’s how it is with most books,
if the truth were told.
Who tells the truth about truth, my dear?
Make way for the judge and the jester.
[tr. Kennelly (2008), "How It Is"]

Some good, some middling, and some bad
You’ll find here. They are what I had.
[tr. J. V. Cunningham]

Some good, some so-so, most of them naught!
Well, if not worse, the book may still be bought.
[Anon.]

Life is too short to drink bad wine.

Often attributed to him, but not found in Goethe's works. The attribution, though, may come from translators' commentary on Goethe's West–Eastern Diwan, "The Book of the Cup-Bearer" (1819/1827), that refers to a poetic passage as deriving from Diez's 1811 translation of the Book of Kabus (Qabus):

It comes to this, that it is a sin to drink wine. If though, then committest sin, commit it at least for the best wine, for otherwise wouldst though on one part commit sin, and on another drink bad wine. By God! that would be the most sorrowful among sorrowful things. [tr. Rogers (1890)]

It so happens that wine-drinking is a sin. Hence, if you do commit this sin, do it at least with the best wine; otherwise, you'll commit the sin, on the one hand, and on the other, you'll drink bad wine. By God! That would be the sorriest of all sorry things. [tr. Ormsby (2019)]

More information: The Big Apple: “Life is too short to drink cheap wine”

He used to say that states fail when they cannot distinguish fools from serious men. 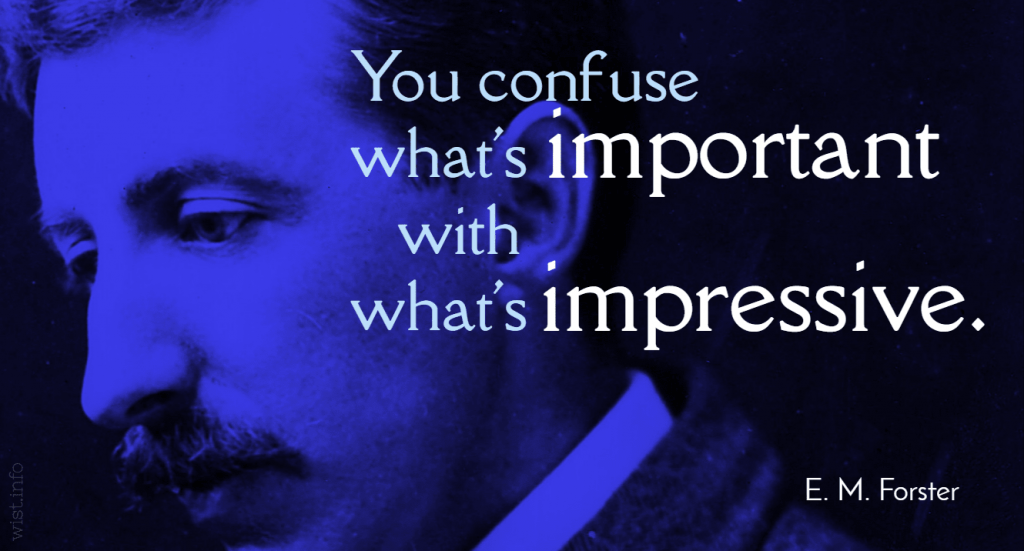 In the Laundry we supposedly pride ourselves on our procedures. We’ve got procedures for breaking and entering offices, procedures for reporting a shortage of paper clips, procedures for summoning demons from the vasty deeps, and procedures for writing procedures. We may actually be on track to be the world’s first ISO-9000 total-quality-certified intelligence agency. According to our written procedure for dealing with procedural cluster-fucks on foreign assignment, what I should do at this point is fill out Form 1008.7, then drive like a bat out of hell over Highway 17 until it hits the Interstate, then take the turnoff for San Francisco Airport and use my company credit card to buy the first available seat home. Not forgetting to file Form 1018.9 (“expenses unexpectedly incurred in responding to a situation 1008.7 in the line of duty”) in time for the end of month accounting cycle.

Every time you think television has hit its lowest ebb, a new type program comes along to make you wonder where you thought the ebb was.

Don’t consider how many you can please, but whom.

A little mind is always hurried, by twenty things at once; but a man of sense does but one thing at a time, and resolves to excel in it; for whatever is worth doing at all is worth doing well.

There’s no such thing as bad whiskey. Some whiskeys just happen to be better than others. But a man shouldn’t fool with booze until he’s fifty, and then he’s a damn fool if he doesn’t.

Better be cheated in the price than in the quality of goods.

Better to be cheated by the price than by the merchandise.
[tr. Maurer (1992)]

There’s many a good tune played on an old fiddle.

Cheat me in the Price, but not in the Goods.

The strawberry grows underneath the nettle.