It is a melancholy truth that a suppression of the press could not more compleatly deprive the nation of its benefits, than is done by its abandoned prostitution to falsehood. Nothing can now be believed which is seen in a newspaper. Truth itself becomes suspicious by being put into that polluted vehicle. […] I will add that the man who never looks into a newspaper is better informed than he who reads them; inasmuch as he who knows nothing is nearer to truth than he whose mind is filled with falsehoods & errors. He who reads nothing will still learn the great facts, and the details are all false.

In the First Amendment, the Founding Fathers gave the free press the protection it must have to fulfill its essential role in our democracy. The press was to serve the governed, not the governors. The Government’s power to censor the press was abolished so that the press would remain forever free to censure the Government. The press was protected so that it could bare the secrets of government and inform the people. Only a free and unrestrained press can effectively expose deception in government. And paramount among the responsibilities of a free press is the duty to prevent any part of the government from deceiving the people and sending them off to distant lands to die of foreign fevers and foreign shot and shell.

Good news goes unnoticed. This is a well-known property of the press in the free world. Improvements are never dramatic. Life improves slowly and goes wrong fast, and only catastrophe is clearly visible.

Fascism, after all, is not only a historical term; it describes a modern style of authoritarian rule that seeks to mobilize the masses by appealing to nationalism, xenophobia, and populist resentment. Its trademark is the use of democratic procedure even as it seeks to destroy the substantive values of democracy from within. It disdains the free press and seeks to undermine its credibility in the public sphere.

A newspaper, as I’m sure you know, is a collection of supposedly true stories written down by writers who either saw them happen or talked to people who did. These writers are called journalists, and like telephone operators, butchers, ballerinas, and people who clean up after horses, journalists can sometimes make mistakes.

There are those in the industry who believe broadcasting can move men, and even some who believe it could move mountains, but they are outnumbered by those who believe all it has to do is move goods.

The moment we no longer have a free press, anything can happen. What makes it possible for a totalitarian or any other dictatorship to rule is that people are not informed; how can you have an opinion if you are not informed?

The methods by which the “Empire of Business” maintains its control over journalism are four: First, ownership of the papers; second, ownership of the owners; third, advertising subsidies; and fourth, direct bribery. By these methods there exists in America a control of news and of current comment more absolute than any monopoly in any other industry.

As a woman, I find it very embarrassing to be in a meeting and realize I’m the only one in the room with balls.

On working in the TV and film industry.

Television brought the brutality of war into the comfort of the living room. Vietnam was lost in the living rooms of America — not the battlefields of Vietnam. 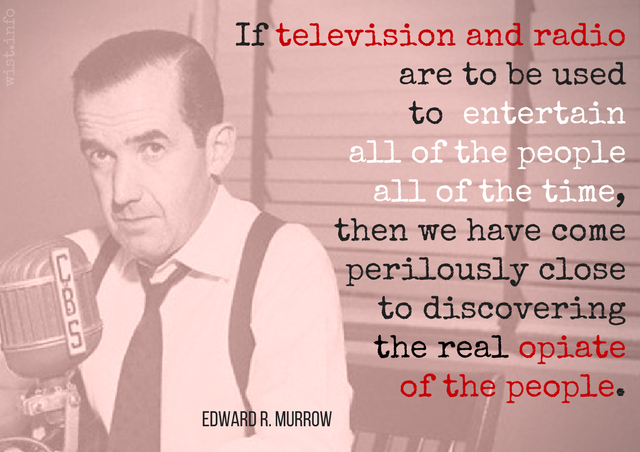 This instrument can teach. It can illuminate. Yes, and it can even inspire. But it can do so only to the extent that humans are determined to use it to those ends. Otherwise, it is merely wires and lights in a box.

Life is not made up of dramatic incidents — even the life of a nation. It is made up of slowly evolving events and processes, which newspapers, by a score of different forms of emphasis, can reasonably attempt to explore from day to day. But television news jerks from incident to incident. For the real world of patient and familiar arrangements, it substitutes an unreal world of constant activity, and the effect is already apparent in the way which the world behaves. It is almost impossible, these days, to consider any problem or any event except as a crisis; and, by this very way of looking at it, it in fact becomes a crisis.

I am weary of reading Newspapers. The Times are so full of Events, the whole Drama of the World is such a Tragedy that I am weary of the Spectacle.

A democracy is badly served when newspapers and television focus so intensely on the personal joys and tragedies of famous people. This kind of “news” crowds out more serious issues, and there is an important difference — as the Constitution’s framers well knew, and as many people today appear to have forgotten — between the public interest and what interests the public.

If you want to be adored by your peers and have standing ovations wherever you go — live to be over ninety.

Reading after a certain age diverts the mind too much from its creative pursuits. Any man who reads too much and uses his own brain too little falls into lazy habits of thinking, just as the man who spends too much time in the theater is tempted to be content with living vicariously instead of living his own life.

Reprinted in George Sylvester Viereck, Glimpses of the Great (1930).

Every time you think television has hit its lowest ebb, a new type program comes along to make you wonder where you thought the ebb was.

There are persons who honestly do not see the use of books in the home, either for information — have they not radio and even television? — or for decoration — is there not the wallpaper?

Kris Kristofferson (b. 1936) American singer, songwriter, musician, actor
“Blame It on The Stones” (1970) [with Bucky Wilkin]

It’s important to remember that the relationship between different media tends to be complementary. When new media arrive they don’t necessarily replace or eradicate previous types. Though we should perhaps observe a half second silence for the eight-track. — There that’s done. What usually happens is that older media have to shuffle about a bit to make space for the new one and its particular advantages. Radio did not kill books and television did not kill radio or movies — what television did kill was the cinema newsreel.

MILNE: No matter how imperfect things are, if you’ve got a free press everything is correctable, and without it everything is concealable.
RUTH: I’m with you on the free press. It’s the newspapers I can’t stand.

There is no business like show business — except sports business.

TV — a clever contraction, derived from the words Terrible Vaudeville. We call it a medium, because nothing’s well done.

Published in The Groucho Letters.

The basis of our governments being the opinion of the people, the very first object should be to keep that right; and were it left to me to decide whether we should have a government without newspapers, or newspapers without a government, I should not hesitate a moment to prefer the latter.

When you’re young, you look at television and think, There’s a conspiracy. The networks have conspired to dumb us down. But when you get a little older, you realize that’s not true. The networks are in business to give people exactly what they want. That’s a far more depressing thought. Conspiracy is optimistic! You can shoot the bastards! We can have a revolution! But the networks are really in business to give people what they want. It’s the truth.

There can be no higher law in journalism than to tell the truth and shame the devil.

No experiment can be more interesting than that we are now trying, and which we trust will end in establishing the fact, that man may be governed by reason and truth. Our first object should therefore be, to leave open to him all the avenues to truth. The most effectual hitherto found, is the freedom of the press. It is therefore, the first shut up by those who fear the investigation of their actions.

Perhaps an editor might begin a reformation in some such way as this. divide his paper into 4. chapters, heading the 1st. Truths. 2d. Probabilities. 3d. Possibilities. 4th. Lies. The 1st. chapter would be very short, as it would contain little more than authentic papers, and information from such sources as the editor would be willing to risk his own reputation for their truth. The 2d. would contain what, from a mature consideration of all circumstances, his judgment should conclude to be probably true. This however should rather contain too little than too much. The 3d. & 4th. should be professedly for those readers who would rather have lies for their money than the blank paper they would occupy.

A popular government without popular information, or the means of acquiring it, is but a prologue to a farce or a tragedy; or, perhaps, both. Knowledge will forever govern ignorance. And a people who mean to be their own governors must arm themselves with the power which knowledge gives.

The speed of communications is wondrous to behold. It is also true that speed can multiply the distribution of information that we know to be untrue. The most sophisticated satellite has no conscience. The newest computer can merely compound, at speed, the oldest problem in the relations between human beings and in the end the communicator will be confronted with the old problem of what to say and how to say it.

Par-runts of rugmonkeys everywhere are worrying that their children will want to become Force-wielding breath masked Sithlords? Sweet Cream-of-Jesus on TOAST POINTS, people!! So now we have to fear that every crib-lizard that loves Anakin Skywalker will become Evil Incarnate. It’s been a lovely planet, but I think I need to go, now.

Many wearing rapiers are afraid of goosequills.