It is a melancholy truth that a suppression of the press could not more compleatly deprive the nation of its benefits, than is done by its abandoned prostitution to falsehood. Nothing can now be believed which is seen in a newspaper. Truth itself becomes suspicious by being put into that polluted vehicle. […] I will add that the man who never looks into a newspaper is better informed than he who reads them; inasmuch as he who knows nothing is nearer to truth than he whose mind is filled with falsehoods & errors. He who reads nothing will still learn the great facts, and the details are all false.

But of all injustice, theirs is certainly of the deepest die, who make it their business to appear honest men, even whilst they are practising the greatest of villainies. 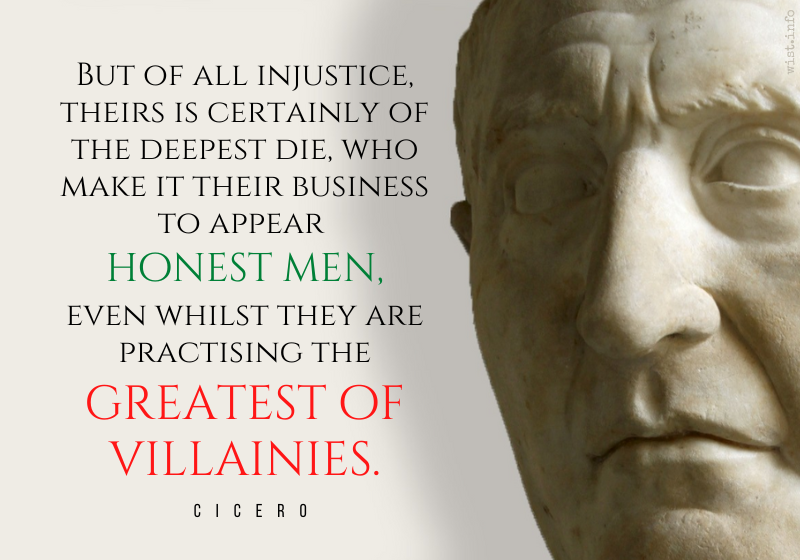 No act of injustice is more pernicious than theirs, who while they are attempting the greatest deceit, labor to appear good men.
[tr. McCartney (1798)]

But in the whole system of villainy, none is more capital than that of the men, who, when they most deceive, so manage as that they may seem to be virtuous men.
[tr. Edmonds (1865)]

But of all forms of injustice, none is more heinous than that of the men who, while they practise fraud to the utmost of their ability, do it in such a way that they appear to be good men.
[tr. Peabody (1883)]

The most criminal injustice is that of the hypocrite who hides an act of treachery under the cloak of virtue.
[tr. Gardiner (1899)]

No iniquity is more deadly than that of those who, when they are most at fault, so behave as to seem men of integrity.
[ed. Harbottle (1906)]

But of all forms of injustice, none is more flagrant than that of the hypocrite who, at the very moment when he is most false, makes it his business to appear virtuous.
[tr. Miller (1913)]

Taking all forms of injustice into account, none is more deadly than that practiced by people who act as if they are good men when they are being most treacherous.
[tr. Edinger (1974)]

O,
Dissembling courtesy! How fine this tyrant
Can tickle where she wounds!

Ours is a problem in which deception has become organized and strong; where truth is poisoned at its source; one in which the skill of the shrewdest brains is devoted to misleading a bewildered people. 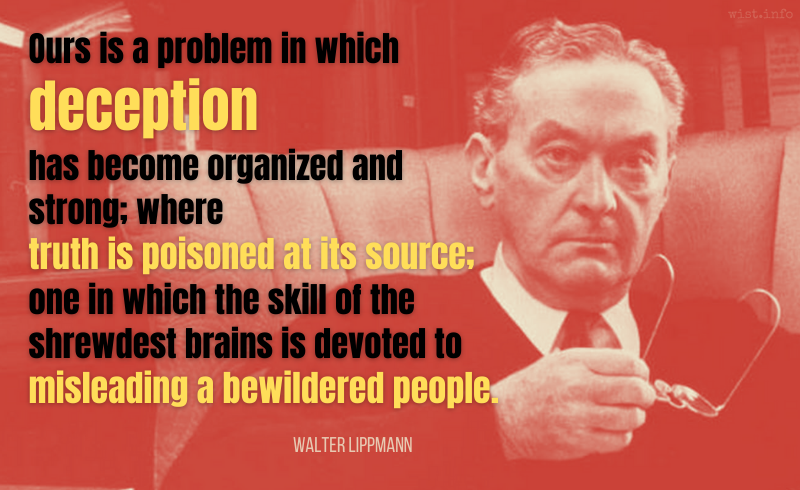 Unlike a human smile, purring cannot be, as far as anyone knows, faked.

While it is easy to lie with statistics, it is even easier to lie without them.

Truth is the first casualty in war.


Variant: "Truth is the first casualty of war."

Not found, as such, in Aeschylus' works. The closest (Fragm. Incert, xi.) is his phrase "God is not averse to deceit in a just cause." Attribution to of the subject phrase to Aeschylus dates only back to 1965. The first recorded use of the phrase as such is from 1915, but even there it is offered as a quotation from an unnamed source.

More discussion of the history of this phrase can be found here and here.

The camera cannot lie. But it can be an accessory to untruth.

Who dares think one thing, and another tell,
My heart detests him as the gates of hell.

Hateful to me as the gates of Hades is he who conceals one thing in his mind and utters another. [tr. Buckley (1860)]

For hateful to me even as the gates of hell is he that hideth one thing in his heart and uttereth another. [tr. Leaf/Lang/Myers (1891)]

Him do I hate even as the gates of hell who says one thing while he hides another in his heart.
[tr. Butler (1898)]

How easy it is to make people believe a lie, and how hard it is to undo that work again! 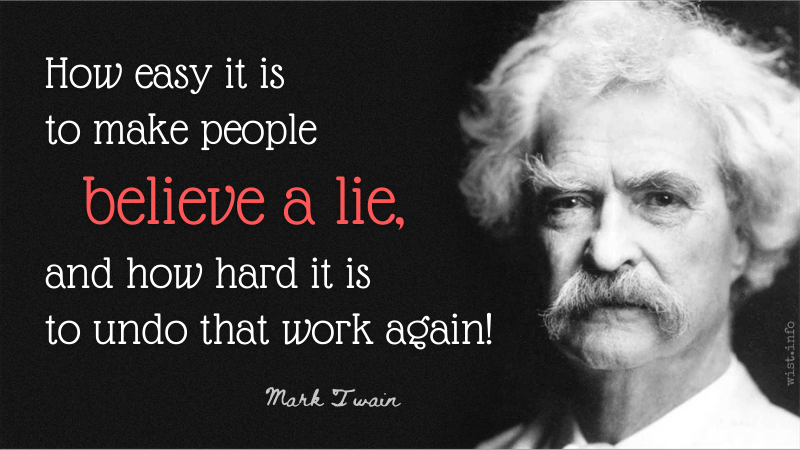 
A sentiment that may be behind the spurious Twain quotation, "It's easier to fool people than to convince them that they have been fooled."

Today I bent the truth to be kind, and I have no regret, for I am far surer of what is kind than I am of what is true.

Mass propaganda discovered that its audience was ready at all times to believe the worst, no matter how absurd, and did not particularly object to being deceived because it held every statement to be a lie anyhow. The totalitarian mass leaders based their propaganda on the correct psychological assumption that, under such conditions, one could make people believe the most fantastic statements one day, and trust if the next day they were given irrefutable proof of their falsehood, they would take refuge in cynicism; instead of deserting the leaders who had lied to them, they would protest that they had known all along the statement was a lie and would admire the leaders for their superior tactical cleverness. 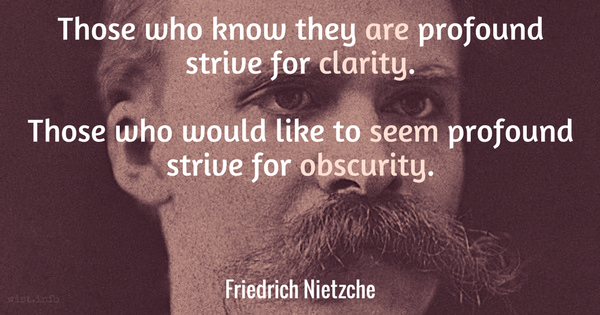 Talking much about oneself can also be a means to conceal oneself. 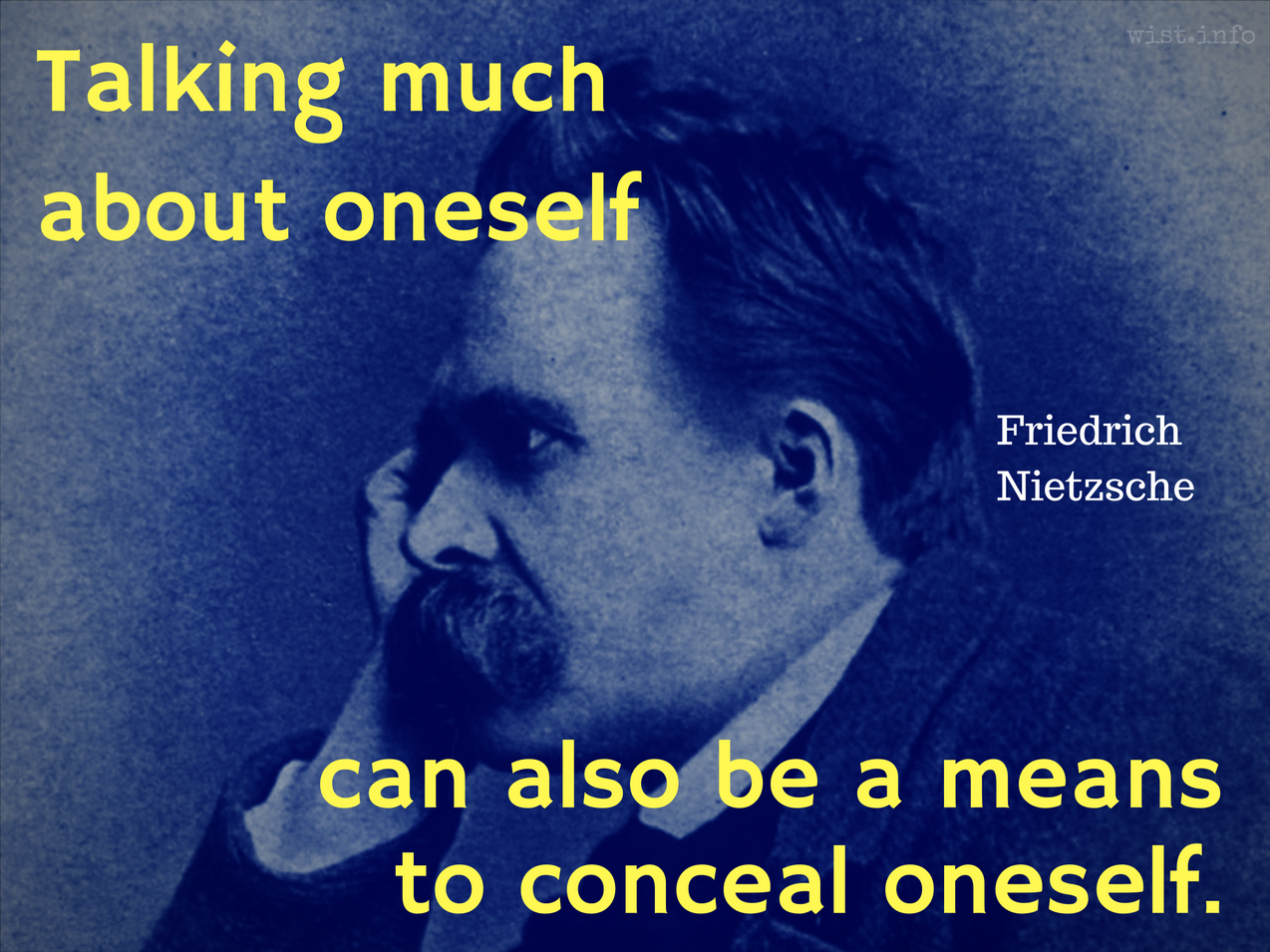 Terrorism and deception are weapons not of the strong but of the weak.

Lying is done with words, and also with silence.

It’s easier to fool people than to convince them that they have been fooled.

There are three kinds of lies: lies, damned lies, and statistics. 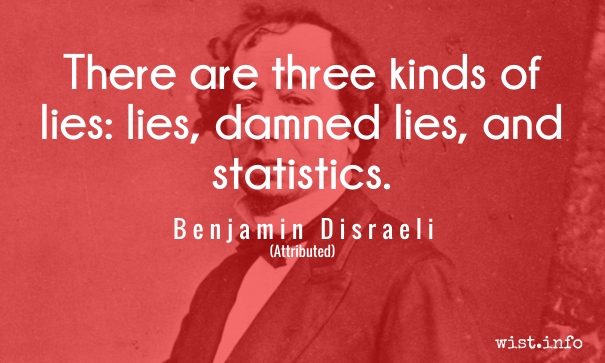 
Attributed by Mark Twain in "Chapters from My Autobiography" (Apr 1904), North American Review (7 Sep 1906): "Figures often beguile me, particularly when I have the arranging of them myself; in which case the remark attributed to Disraeli would often apply with justice and force: 'There are three kinds of lies: lies, damned lies, and statistics.'"

The phrase has not been found in any of Disraeli's works, and he is considered unlikely to be the originator. Variants of the phrase date back a century or more from Twain's reference. More discussion about this quotation here:

Nearly always, the best deception trades on the enemy’s own preconceptions. If he already believes what you want him to believe, you have merely to confirm his own ideas rather than to undertake the more difficult task of inserting new ones into his mind.

He that applauds him who does not deserve praise, is endeavoring to deceive the public; he that hisses in malice or sport, is an oppressor and a robber.

Use no hurtful deceit; think innocently and justly and, if you speak, speak accordingly.


Alternately, "Appearances often are deceiving." Versified by Gaius Julius Phaedrus, Fables bk. 4, as "Things are not always what they seem."

Note that there are two fables by this name. In this one, a wolf prospers by wearing a sheepskin he finds and drawing other sheep away to be eaten. In other versions, the wolf sneaks into the sheepfold wearing the skin, and then is killed and eaten by the farmer who wants sheep for dinner.

By a lie a man throws away and, as it were, annihilates his dignity as a man.

We begin by fooling others and end up fooling ourselves.

Eric Alterman (b. 1960) American historian, journalist, author
Sound and Fury: The Washington Punditocracy and the Collapse of American Politics, Introduction (1992)

Who has deceiv’d thee so oft as thy self?

Nor can a man dupe others long, who has not duped himself first.


Often rendered: "A man cannot dupe others long, who has not duped himself first."

I honestly beleave it iz better tew know nothing than two know what ain’t so.

[I honestly believe it is better to know nothing than to know what ain’t so.]


This was Billings signature aphorism, and he used variations on multiple occasions. Variants and evolutions have also been misattributed to Will Rogers, Mark Twain, and Artemus Ward, sometimes from their own paraphrases of Billings. Some variations (usually without specific citations) include:
In a similar vein, Billings wrote, "Wisdum don't konsist in knowing more that iz new, but in knowing less that iz false. [Wisdom doesn't consist in knowing more that is new, but in knowing less than is false.]" [Source]

More discussion about this quotation:

When the issue is one of Truth and Justice, there can be no differentiating between small problems and great ones. For the general viewpoints on human behaviour are indivisible. People who fail to regard the truth seriously in small matters, cannot be trusted in matters that are great.


Often paraphrased / translated, "Anyone who doesn't take truth seriously in small matters cannot be trusted in large ones either." See here for more discussion.

If falsehood, like truth, had but one face, we would be more on equal terms. For we would consider the contrary of what the liar said to be certain. But the opposite of truth has a hundred thousand faces and an infinite field.


Alt trans. [C. Cotton (1877)]: "If falsehood had, like truth, but one face only, we should be upon better terms; for we should then take for certain the contrary to what the liar says: but the reverse of truth has a hundred thousand forms, and a field indefinite, without bound or limit."

Alt trans. [Florio (1603)]: "If a lie had no more faces but one, as truth had, we should be in farre better termes than we are: For whatsoever a lier should say, we would take it in a contrarie sense. But the opposite of truth has many shapes, and an undefinite field."

The speed of communications is wondrous to behold. It is also true that speed can multiply the distribution of information that we know to be untrue. The most sophisticated satellite has no conscience. The newest computer can merely compound, at speed, the oldest problem in the relations between human beings and in the end the communicator will be confronted with the old problem of what to say and how to say it.

Those words, “temperate and moderate,” are words either of political cowardice, or of cunning, or seduction. A thing moderately good, is not so good as it ought to be. Moderation in temper, is always a virtue; but moderation in principle, is a species of vice.

Lord, Lord, how this world is given to lying!

A candor affected is a dagger concealed.

Frank and explicit: That is the right line to take when you wish to conceal your mind and confuse the minds of others.

Always acknowledge a fault. This will throw those in authority off their guard and give you an opportunity to commit more.

You can’t reason someone out of something they weren’t reasoned into.