Low people, in good circumstances, fine clothes, and equipage, will insolently show contempt for all those who cannot afford as fine clothes, as good an equipage, and who have not (as they term it) as much money in their pockets: on the other hand, they are gnawed with envy, and cannot help discovering it, of those who surpass them in any of these articles; which are far from being sure criterions of merit.

There is another sort of lies, inoffensive enough in themselves, but wonderfully ridiculous; I mean those lies which a mistaken vanity suggests, that defeat the very end for which they are calculated, and terminate in the humiliation and confusion of their author, who is sure to be detected. These are chiefly narrative and historical lies, all intended to do infinite honor to their author. He is always the hero of his own romances; he has been in dangers from which nobody but himself ever escaped; he as seen with his own eyes, whatever other people have heard or read of; he has had more bonnes fortunes than ever he knew women; and has ridden more miles post in one day, than ever courier went in two. He is soon ridiculed, and as soon becomes the object of universal contempt and ridicule.

Christ saw much in this world to weep over, and much to pray over: but he saw nothing in it to look upon with contempt.

Discussing why the gods do not mingle with humanity. Alt. trans.: The first part of the phrase is also used as the moral in the traditional English translation of Aesop's "The Fox and the Lion."

For the propaganda of totalitarian movements which precede and accompany totalitarian regimes is invariably as frank as it is mendacious, and would-be totalitarian rulers usually start their careers by boasting of their past crimes and carefully outlining their future ones. The Nazis were “convinced that evil-doing in our time has a morbid force of attraction,” Bolshevik assurances inside and outside Russia that they do not recognize ordinary moral standards have become a mainstay of Communist propaganda, and experience has proven time and again that the propaganda value of evil deeds and general contempt for moral standards is independent of mere self-interest, supposedly the most powerful psychological factor in politics.

Suffering cleanses only when it is free of resentment. Wholehearted contempt for our tormentors safeguards our soul from the mutilations of bitterness and hatred.

Power always Sincerely, conscientiously, de très bon foi, believes itself Right. Power always thinks it has a great Soul and vast Views, beyond the Comprehension of the Weak; and that it is doing God Service when it is violating all his Laws.

Admiration is a very short-lived passion, that immediately decays upon growing familiar with its object.

All the works of Nature are Miracles, and nothing makes them appear otherwise but our Familiarity with them.

There is nothing that people bear more impatiently, or forgive less, than contempt; and an injury is much sooner forgotten than an insult. 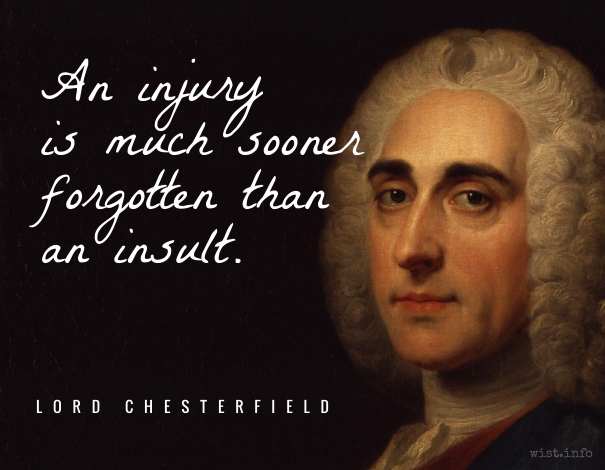 Many can bear Adversity but few Contempt.

To argue with a man who has renounced the use and authority of reason, and whose philosophy consists in holding humanity in contempt, is like administering medicine to the dead, or endeavoring to convert an Atheist by scripture.

Sometimes shortened as: "To argue with a man who has renounced his reason is like giving medicine to the dead."

Good breeding consists in concealing how much we think of ourselves and how little we think of the other person.