Men who want to be feared must necessarily fear the very people who fear them.

For they who desire to become objects of terror to others, must dread those who regard them with fear.
[tr. McCartney (1798)]

For it is a necessary consequence, that men fear those very persons by whom they wish to be feared.
[tr. Edmonds (1865)]

For it is inevitable that those who wish to be feared should themselves fear the very persons by whom they are feared.
[tr. Peabody (1883)]

For men involuntarily fear those whom they intimidate.
[tr. Gardiner (1899)]

Those who wish to be feared must inevitably be afraid of those whom they intimidate.
[tr. Miller (1913)]

When valor preys on reason,
It eats the sword it fights with.

To ruminate upon evils, to make critical notes upon injuries, and be too acute in their apprehensions, is to add unto our own Tortures, to feather the Arrows of our Enemies, to lash our selves with the Scorpions of our Foes, and to resolve to sleep no more.

There is another sort of lies, inoffensive enough in themselves, but wonderfully ridiculous; I mean those lies which a mistaken vanity suggests, that defeat the very end for which they are calculated, and terminate in the humiliation and confusion of their author, who is sure to be detected. These are chiefly narrative and historical lies, all intended to do infinite honor to their author. He is always the hero of his own romances; he has been in dangers from which nobody but himself ever escaped; he as seen with his own eyes, whatever other people have heard or read of; he has had more bonnes fortunes than ever he knew women; and has ridden more miles post in one day, than ever courier went in two. He is soon ridiculed, and as soon becomes the object of universal contempt and ridicule.

A bad cause seldom fails to betray itself.

Anger is like the blade of a butcher knife — very difficult to hold on to for long without harming yourself.

Man has no greater enemy than himself. I have acted contrary to my sentiments and inclination; throughout our whole lives we do what we never intended, and what we proposed to do, we leave undone.

Loserism is when oppressed people sit around and think up reasons why they can’t do something. Well just do it. Thinking up reasons why you can’t is the Establishment’s job.

If a cause be good, the most violent attack of its enemies will not injure it so much as an injudicious defense of it by its friends. 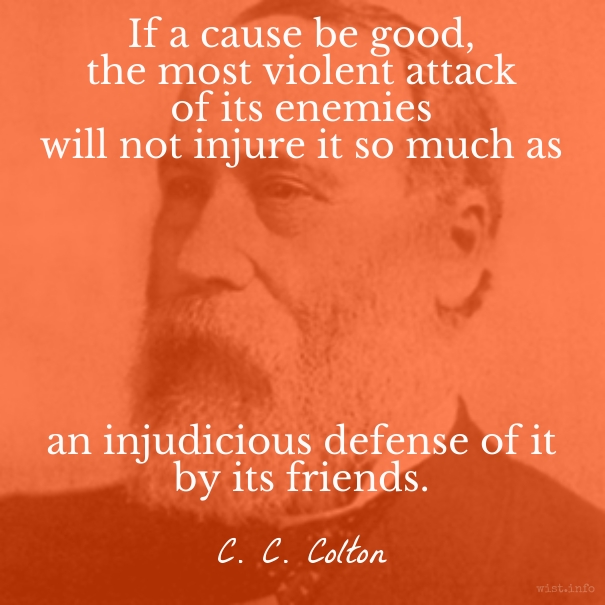 Added on 18-May-16 | Last updated 18-May-16
Link to this post | No comments
Topics: attacks, cause, defense, meme, self-defeating, zeal
More quotes by Colton, Charles Caleb

If you don’t have confidence, you’ll always find a way not to win. 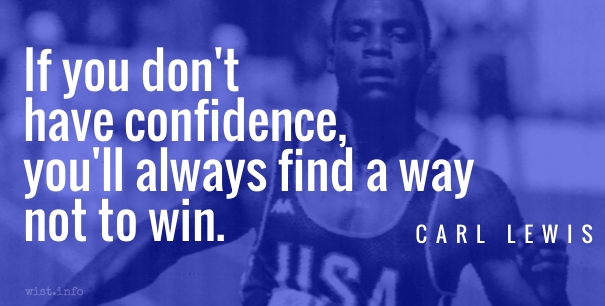 What nobody tells people who are beginners, and I really wish someone had told this to me, is that […] all of us who do creative work, we get into it, and we get into because we have good taste. […] But you get into this thing […] and there’s a gap. For the first couple of years that you’re making stuff, what you’re making isn’t so good. It’s not that great. It’s really not that great. It’s trying to be good, it has ambition to be good, but it’s not quite that good. But your taste, the thing that got you into the game, your taste is still killer. And your taste is good enough that you can tell that what you’re making is kind of a disappointment to you. That you can tell it’s still sort of crappy. A lot of people never get past that phase. A lot of people at that point, they quit. […] The thing I want to tell you is, everybody goes through that. […] It’s totally normal. And the most important possible thing you can do is do a lot of work. Do a huge volume of work. Put yourself on a deadline so that every week or every month you know you’re going to finish one story. […] Because it’s only by actually going through a volume of work that you’re going to catch up and close that gap. And the work you’re making will be as good as your ambitions. […] It’s going to take you awhile. It’s normal to take a while. You just have to fight your way through that.

There are many who find a good alibi far more attractive than an achievement. For an achievement does not settle anything permanently. We still have to prove our worth anew each day: we have to prove that we are as good today as we were yesterday. But when we have a valid alibi for not achieving anything we are fixed, so to speak, for life. Moreover, when we have an alibi for not writing a book, painting a picture, and so on, we have an alibi for not writing the greatest book and not painting the greatest picture. Small wonder that the effort expended and the punishment endured in obtaining a good alibi often exceed the effort and grief requisite for the attainment of a most marked achievement.

Most people would succeed in small things if they were not troubled with great ambitions.

Lending to a spendthrift is like pelting a trespassing dog with meat dumplings.