Tolerance and apathy are the last virtues of a dying society.

Not found in the writings of Aristotle, or, with variation, anywhere early than the 19th Century. More discussion of this quotation's origins and misuses:

The greatest danger to our future is apathy. We cannot expect those living in poverty and ignorance to worry about saving the world. For those of us able to read this magazine, it is different. We can do something to preserve our planet.

If you are bored and disgusted by politics and don’t bother to vote, you are in effect voting for the entrenched Establishments of the two major parties, who please rest assured are not dumb, and who are keenly aware that it is in their interests to keep you disgusted and bored and cynical and to give you every possible psychological reason to stay at home doing one-hitters and watching MTV on primary day. By all means stay home if you want, but don’t bullshit yourself that you’re not voting. In reality, there is no such thing as not voting: you either vote by voting, or you vote by staying home and tacitly doubling the value of some Diehard’s vote.

LONDO: Big concerns grow from small concerns. You plant them, water them with tears, fertilize them with unconcern. If you ignore them, they grow.

We are the most unfair, not towards him whom we do not like, but toward him for whom we feel nothing at all. 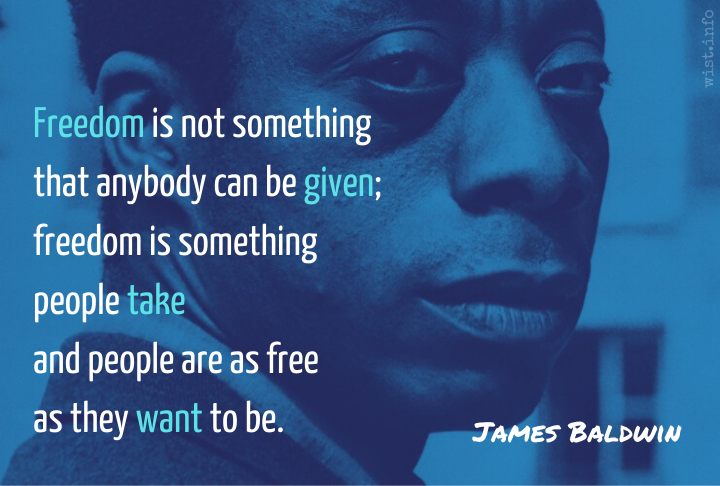 Later published in Nobody Knows My Name (1961).

When you have to make a choice and don’t make it, that is in itself a choice.

“Scarlett, I was never one to patiently pick up broken fragments and glue them together and tell myself that the mended whole was as good as new. What is broken is broken — and I’d rather remember it as it was at its best than mend it and see the broken places as long as I lived. Perhaps if I were younger–” he sighed. “But I’m too old to believe in such sentimentalities as clean slates and starting all over. I’m too old to shoulder the burden of constant lies that go with living in polite disillusionment. I couldn’t live with you and lie to you and I certainly couldn’t lie to myself. I can’t even lie to you now. I wish I could care what you do or where you go, but I can’t.”

He drew a short breath and said lightly but softly:

Unless someone like you
cares a whole awful lot,
nothing is going to get better.
It’s not. 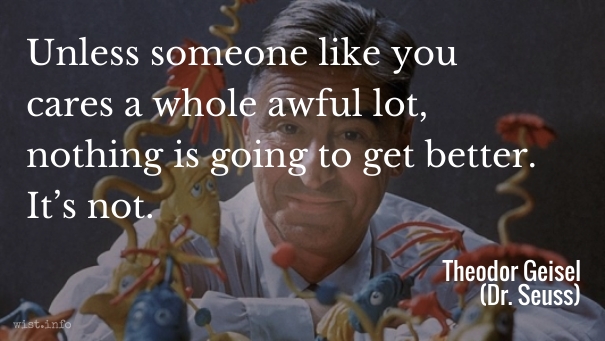 Emotion, whether of ridicule, anger, or sorrow, — whether raised at a puppet show, a funeral, or a battle, — is your grandest of levelers. The man who would be always superior should be always apathetic.

There is one characteristic of the present direction of public opinion peculiarly calculated to make it intolerant of any marked demonstration of individuality. The general average of mankind are not only moderate in intellect, but also moderate in inclinations; they have no tastes or wishes strong enough to incline them to do anything unusual, and they consequently do not understand those who have, and class all such with the wild and intemperate whom they are accustomed to look down upon.

Any sufficiently advanced indifference is indistinguishable from evil.

Added on 19-May-15 | Last updated 19-May-15
Link to this post | No comments
Topics: apathy, compassion, evil, indifference, uncaring
More quotes by Wiman, George 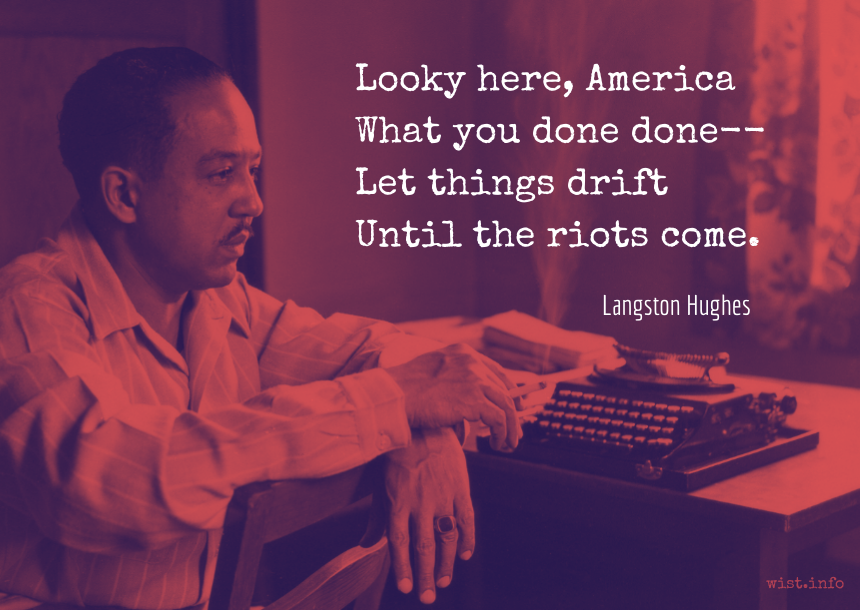 The biggest sin is sitting on your ass.

Too many people don’t care what happens so long as it doesn’t happen to them.

If there is distrust out there — and there is — perhaps it is because there is so much partisan jockeying for advantage at the expense of public policy. At times it feels as if American politics consists largely of candidates without ideas, hiring consultants without convictions, to stage campaigns without content. Increasingly the result is elections without voters.

He who does not punish evil commends it to be done.

In some versions, this is translated as "commands it to be done."

The death of democracy is not likely to be an assassination from ambush. It will be a slow extinction from apathy, indifference, and undernourishment.

Science may have found a cure for most evils; but it has found no remedy for the worst of them all — the apathy of human beings.

Usually when people are sad, they don’t do anything. They just cry over their condition. But when they get angry, they bring about a change.

Bad men need nothing more to compass their ends than that good men should look on and do nothing.

To ignore evil is to become an accomplice to it.

Widespread intellectual and moral docility may be convenient for leaders in the short term, but it is suicidal for nations in the long term. One of the criteria for national leadership should therefore be a talent for understanding, encouraging, and making constructive use of vigorous criticism.

No one man can terrorize a whole nation, unless we are all his accomplices. 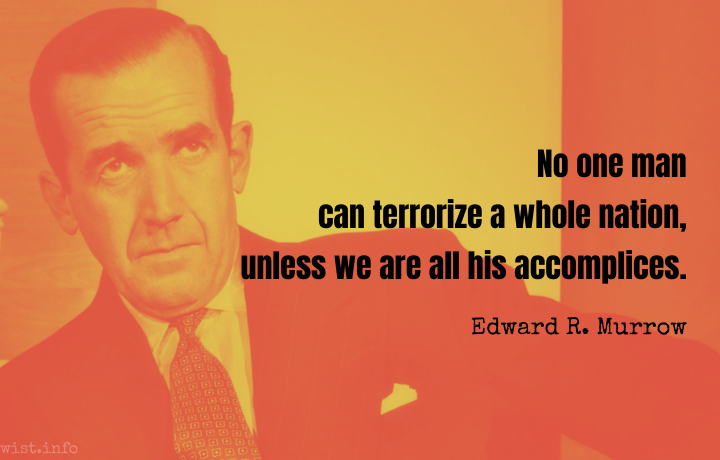 Comment to the production team before the episode on Senator Joseph R McCarthy’s Communist witch hunt.

Bad officials are elected by good people who do not vote. 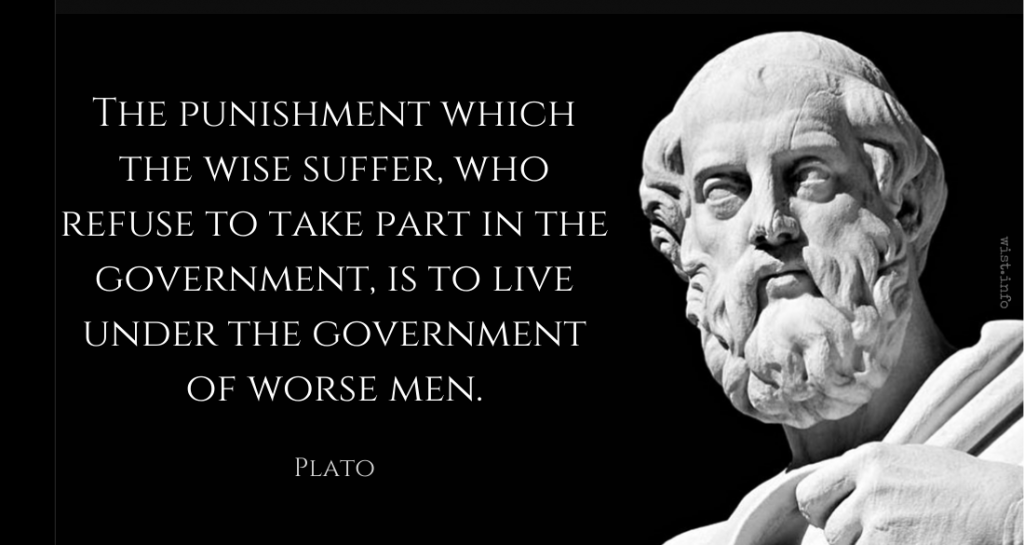 [346e] "Then, Thrasymachus, is not this immediately apparent, that no art or office provides what is beneficial for itself -- but as we said long ago it provides and enjoins what is beneficial to its subject, considering the advantage of that, the weaker, and not the advantage the stronger? That was why, friend Thrasymachus, I was just now saying that no one of his own will chooses to hold rule and office and take other people's troubles in hand to straighten them out, but everybody expects pay for that, [347a] because he who is to exercise the art rightly never does what is best for himself or enjoins it when he gives commands according to the art, but what is best for the subject. That is the reason, it seems, why pay must be provided for those who are to consent to rule, either in form of money or honor or a penalty if they refuse." "What do you mean by that, Socrates?" said Glaucon. "The two wages I recognize, but the penalty you speak of and described as a form of wage I don't understand." "Then," said I, "you don't understand the wages of the best men [347b] for the sake of which the finest spirits hold office and rule when they consent to do so. Don't you know that to be covetous of honor and covetous of money is said to be and is a reproach?" "I do," he said. "Well, then," said I, "that is why the good are not willing to rule either for the sake of money or of honor. They do not wish to collect pay openly for their service of rule and be styled hirelings nor to take it by stealth from their office and be called thieves, nor yet for the sake of honor, [347c] for they are not covetous of honor. So there must be imposed some compulsion and penalty to constrain them to rule if they are to consent to hold office. That is perhaps why to seek office oneself and not await compulsion is thought disgraceful. But the chief penalty is to be governed by someone worse if a man will not himself hold office and rule. It is from fear of this, as it appears to me, that the better sort hold office when they do, and then they go to it not in the expectation of enjoyment nor as to a good thing, but as to a necessary evil and because they are unable to turn it over to better men than themselves [347d] or to their like. For we may venture to say that, if there should be a city of good men only, immunity from office-holding would be as eagerly contended for as office is now, and there it would be made plain that in very truth the true ruler does not naturally seek his own advantage but that of the ruled; so that every man of understanding would rather choose to be benefited by another than to be bothered with benefiting him. "

The sad truth of the matter is that most evil is done by people who never made up their minds to be or do either evil or good.

Sometimes rendered (possibly from the original lecture): "The sad truth is that most evil is done by people who never make up their minds to be good or evil."

Hate is not the opposite of love; apathy is.

Added on 1-Feb-04 | Last updated 16-Sep-20
Link to this post | No comments
Topics: apathy, hate, indifference, love, opposite
More quotes by May, Rollo

It may well be that the greatest tragedy of this period of social transition is not the glaring noisiness of the bad people, but the appalling silence of the good people. It may be that our generation will have repent not only for the diabolical actions and vitriolic words of the children of darkness, but also for the crippling fears and tragic apathy of the children of light.

Often paraphrased: "We will have to repent in this generation not merely for the hateful words and actions of the bad people but for the appalling silence of the good people." See also here.