We cannot learn what causes violence and how we could prevent it as long as we are thinking in the traditional moral and legal terms. The only questions that this way of thinking can ask take the form: “How evil (or heroic) was this particular act of violence, and how much punishment (or reward) does the person who did it deserve?” But even if it were possible to gain the knowledge that would be necessary to answer those questions (which it is not), answers would still not help us in the least to understand what causes violence or how we could prevent it — these are empirical not moral questions.

Like enough, you won’t be glad,
When they come to hang you, lad:
But bacon’s not the only thing
That’s cured by hanging from a string.

Houseman, writing to his brother, said of the parody: "It's the best I have seen, and indeed, the only good one."

Our remedies oft in ourselves do lie,
Which we ascribe to Heaven.

To be kind is more important than to be right. Many times, what people need is not a brilliant mind that speaks but a special heart that listens.

Thus, because we are rapidly advancing along this non-sustainable course, the world’s environmental problems will get resolved, in one way or another, within the lifetimes of the children and young adults alive today The only question is whether they will become resolved in pleasant ways of our own choice, or in unpleasant ways not of our choice, such as warfare, genocide, starvation, disease epidemics, and collapses of societies. While all of those grim phenomena have been endemic to humanity throughout our history, their frequency increases with environmental degradation, population pressure, and the resulting poverty and political instability.

While we do our good works let us not forget that the real solution lies in a world in which charity will have become unnecessary.

There comes a point where we need to stop just pulling people out of the river. We need to go upstream and find out why they’re falling in.

The problem of drugs, of divorce, of race prejudice, of unmarried pregnancy, and so on — as if evil were a problem, something that an be solved, that has an answer, like a problem in fifth grade arithmetic. If you want the answer, you just look in the back of the book. That is escapism, that posing evil as a “problem,” instead of what it is: all the pain and suffering and waste and loss and injustice we will meet our loves long, and must face and cope with over and over and over, and admit, and live with, in order to live human lives at all.

On the difficulty of "realistic fiction" for children to teach morality. First delivered as a speech; later reprinted in The Language of the Night (1979).

Artists and scientists realize that no solution is ever final, but that each new creative step points the way to the next artistic or scientific problem. In contrast, those who embrace religious revelations and delusional systems tend to see them as unshakeable and permanent.

Men have made an idol of luck as an excuse for their own thoughtlessness. Luck seldom measures swords with wisdom. Most things in life quick wit and sharp vision can set right.

Bakewell lists this under "The Golden Sayings of Democritus." Freeman notes this as one of the Gnômae, from a collection called "Maxims of Democratês," but because Stobaeus quotes many of these as "Maxims of Democritus," they are generally attributed to the latter. Alternate translations:

The greatest skill in cards is to know when to discard; the smallest of current trumps is worth more than the ace of trumps of the last game.

Life is not a problem to be solved, but a reality to be experienced.

Misattributed to Kierkegaard by Cyril Connolly, Horizon, vol. 11 (1945). More properly attributed to Jacobus Johannes van der Leeuw (1893–1934), The Conquest of Illusion, ch. 1: "The mystery of life in not a problem to be solved, it is a reality to be experienced."

I doubt if there is in the world a single problem, whether social, political, or economic, which would not find ready solution if men and nations would rule their lives according to the plain teaching of the Sermon on the Mount.

It doesn’t matter whether the cat is black or white, as long as it catches mice. 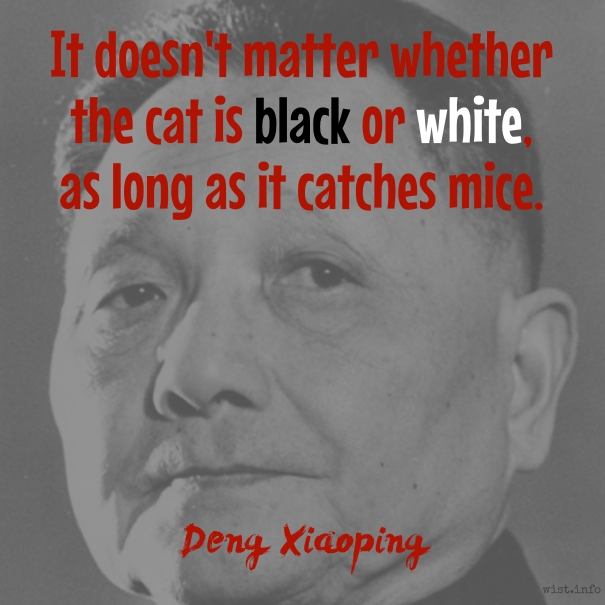 There are a variety of translations, and Deng used the phrase on numerous occasions.

In the crisis of this hour — as in all others that we have faced since our Nation began — there are plenty of recommendations on how to get out of trouble cheaply and fast. Most of them in the last analysis really come down to this: Deny your responsibilities.

Sometimes paraphrased "There are plenty of recommendations on how to get out of trouble cheaply and fast. Most of them come down to this: Deny your responsibility."

Often the fear of one evil leads us into a worse. 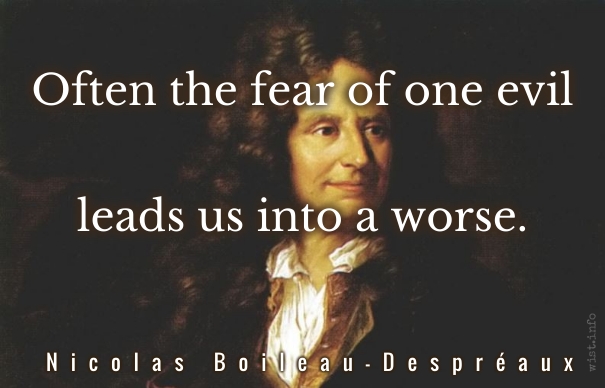 Though this sounds like a profound philosophical comment, in reality it refers to writers overcompensating for problems in their work. Soame (1892) translates this and the following line thus:

A verse was weak, you turn it much too strong.
And grow obscure for fear you should be long.

Unless someone like you
cares a whole awful lot,
nothing is going to get better.
It’s not.

A problem well stated is a problem half-solved. 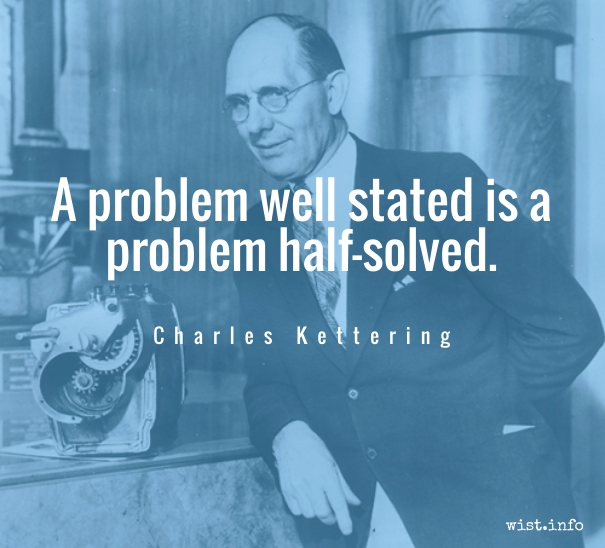 The only difference between a problem and a solution is that people understand the solution.

This problem, when solved, will be simple.

Quoted by Kettering in "Don't Be Afraid to Stumble," The Rotarian (Jan 1952)

Solutions nearly always come from the direction you least expect, which means there’s no point trying to look in that direction because it won’t be coming from there.

The facts are indispensable; they are not sufficient. To solve a problem it is necessary to think.

If this stone won’t budge at present and is wedged in, move some of the other stones around it first.

The older I get, the more wisdom I find in the ancient rule of taking first things first — a process which often reduces the most complex human problems to manageable proportions.

If thy Business be perplexed, divide it, and look upon all its Parts and sides.

At the bottom of every social problem we will find a social wrong.

To ask the right question is already half the solution of a problem.

In reactive problem solving we walk into the future facing the past — we move away from, rather than toward, something. This often results in unforeseen consequences that are more distasteful than the deficiencies removed.

A problem never exists in isolation; it is surrounded by other problems in space and time. The more of the context of a problem that a scientist can comprehend, the greater are his chances of finding a truly adequate solution.

Questions show the mind’s range, and answers, its subtlety.

If a problem has no solution, it may not be a problem, but a fact, not to be solved, but to be coped with over time.

Widely attributed to Peres in different sources. Quoted in the Wall Street Journal (7 Feb 2001). Donald Rumsfeld says that Peres made the observation to him.

There are some remedies worse than the disease. 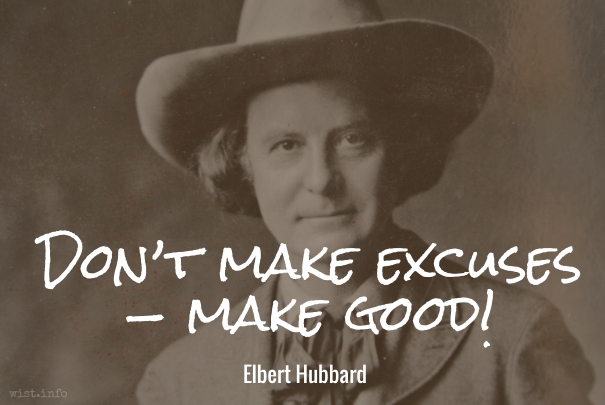 It is the greatest of all mistakes to do nothing because you can only do little. Do what you can.

Explanations exist; they have existed for all time; there is always a well-known solution to every human problem — neat, plausible, and wrong. 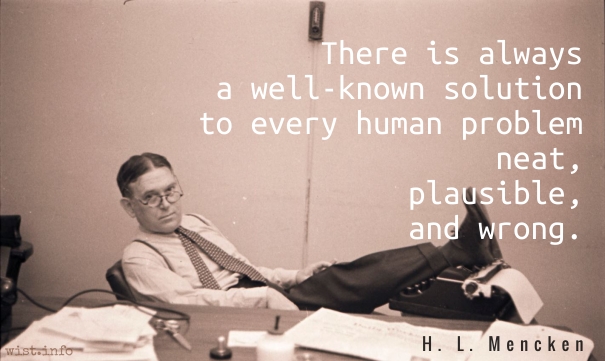 I never, ever say, “I can’t,” about anything. I might say, “I don’t have the authority to make that decision,” or, “Building A is too heavy for me to lift,” or, “I will need training before I pilot that space shuttle.”

All things can be cured by salt water: sweat, tears, or the ocean.

It is not always by plugging away at a difficulty and sticking at it that one overcomes it; but, rather, often by working on the one next to it. Certain people and certain things require to be approached on an angle.

A rain came along last night and gently wet San Diego. It cleaned off my car except for a stubborn bird blessing on the hood. I had been staring at it for several days and the rain cleaned everything except that single spot. (sigh) For the most part, things take care of themselves if we just let them, but every now and again we’ve got to get involved, and dirty our hands.