In mathematics, you don’t understand things, you just get used to them. 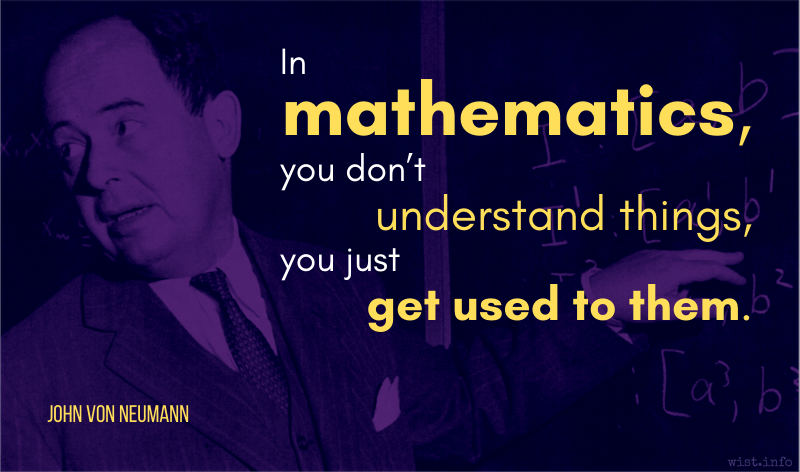 The primary source for this comes from Gary Zukav, The Dancing Wu Li Masters: An Overview of the New Physics (1979), in a footnote on p. 208, related to von Neumann's time working on the H-bomb.

Dr. Felix Smith, Head of Molecular Physics, Stanford Research Institute, once related to me the true story of a physicist friend who worked at Los Alamos after World War II. Seeking help on a difficult problem, he went to the great Hungarian mathematician, John von Neumann, who was at Los Alamos as a consultant.

"Simple," said von Neumann. "The can be solved by using the method of characteristics."

After the explanation, the physicist said, "I'm afraid I don't understand the method of characteristics."

"Young man," said von Neumann, "in mathematics you don't understand things, you just get used to them."

David Wells offers a variant in The Penguin Book of Curious and Interesting Mathematics (1997):

Van Neumann had just about ended his lecture when a student stood up and in a vaguely abashed tone said he hadn't understood the final argument. Von Neumann answered: "Young man, in mathematics you don't understand things. You just get used to them.

Variant: "Don't worry, young man: in mathematics, none of us really understands any idea -- we just get used to them."