The beautiful thing about losing your illusions, he thought, was that you got to stop pretending.

Freedom is not a luxury that we can indulge in when at last we have security and prosperity and enlightenment; it is, rather, antecedent to all of these, for without it we can have neither security nor prosperity nor enlightenment.

I never will believe that our youngest days are our happiest. What a miserable augury for the progress of the race and the destination of the individual, if the more matured and enlightened state is the less happy one! Childhood is only the beautiful and happy time in contemplation and retrospect: to the child it is full of deep sorrows, the meaning of which is unknown.

A bore: Someone who persists in holding to his own views after we have enlightened him with ours.

Until one has loved an animal, a part of one’s soul remains unawakened.


Widely attributed to France, but unsourced.

I must judge for myself, but how can I judge, how can any Man judge, unless his Mind has been opened and enlarged by Reading.

To furnish the means of acquiring knowledge is the greatest benefit that can be conferred upon mankind. It prolongs life itself and enlarges the sphere of existence.

How far that little candle throws his beams!
So shines a good deed in a naughty world. 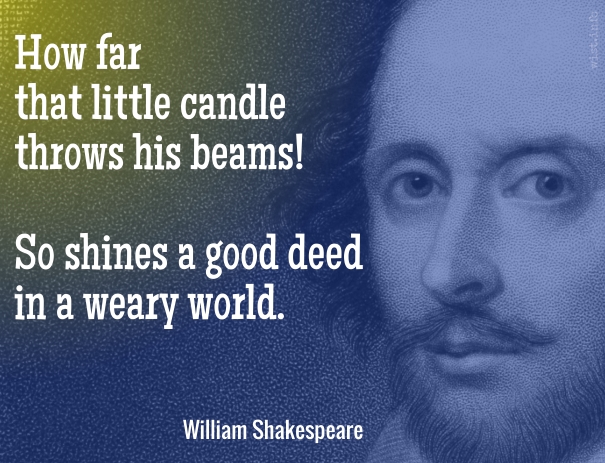 
In some versions, "So shines a good deed in a weary world."

Sometimes attributed to Roald Dahl; Willy Wonka uses the line toward the end of the movie Willy Wonka and the Chocolate Factory (1971).

Those who are destitute of philosophy may be compared to prisoners in a cave, who are only able to look in one direction because they are bound, and who have a fire behind them and a wall in front. Between them and the wall there is nothing; all that they see are shadows of themselves, and of objects behind them, cast on the wall by the light of the fire. Inevitably they regard these shadows as real, and have no notion of the objects to which they are due. At last, some man succeeds in escaping from the cave to the light of the sun; for the first time he sees real things, and becomes aware that he had hitherto been deceived by shadows. If he is the sort of philosopher who is fit to become a guardian, he will feel it is his duty to those who were formerly his fellow prisoners to go down again into the cave, instruct them as to the truth, and show them the way up. But he will have difficulty in persuading them, because, coming out of the sunlight, he will see shadows less clearly than they do, and will seem to them stupider than before his escape.

If you realize you aren’t so wise today as you thought you were yesterday, you’re wiser today.

In proportion as the structure of a government gives forces to public opinion, it is essential that public opinion should be enlightened.

God made life to be lived and not to be known.

They whose knowledge comes by birth are of all men the first (in understanding); they to whom it comes by study are next; men of poor intellectual capacity, who yet study, may be added as a yet inferior class; and lowest of all are they who are poor in intellect and never learn.
[tr. Jennings (1895)]

Those who have innate wisdom take the biggest rank. Those who acquire it by study rank next. Those who learn despite natural limitations come next. But those who are of limited ability and yet will not learn, -- these form the lowest class of men.
[tr. Soothill (1910)]

Those who know instinctively (as at birth) are the highest; those who study and find out, come next; those who are hampered and study come next. Those who are boxed in and do not study constitute the lowest people.
[tr. Pound (1933)]

Knowledge (zhi 知) acquired through a natural propensity for it is its highest level; knowledge acquired through study is the next highest; something learned in response to difficulties encountered is again the next highest. But those among the common people who do not learn even when vexed with difficulties -- they are at the bottom of the heap.
[tr. Ames/Rosemont (1998)]

This appears to be the source of the following aphorism frequently attributed to Confucius, and recorded in James Wood, ed., Dictionary of Quotations (1893):

By three methods we may learn wisdom: First, by reflection, which is noblest; Second, by imitation, which is easiest; and third by experience, which is the bitterest.

For more discussion of that Wood "translation":

Ignorance is the curse of God,
Knowledge the wing wherewith we fly to heaven.