One could not stand and watch very long without becoming philosophical, without beginning to deal in symbols and similes, and to hear the hog squeal of the universe. Was it permitted to believe that there was nowhere upon the earth, or above the earth, a heaven for hogs, where they were requited for all this suffering? Each one of these hogs was a separate creature. Some were white hogs, some were black; some were brown, some were spotted; some were old, some young; some were long and lean, some were monstrous. And each of them had an individuality of his own, a will of his own, a hope and a heart’s desire; each was full of self-confidence, of self-importance, and a sense of dignity. And trusting and strong in faith he had gone about his business, the while a black shadow hung over him and a horrid Fate waited in his pathway.

Now suddenly it had swooped upon him, and had seized him by the leg. Relentless, remorseless, it was; all his protests, his screams, were nothing to it — it did its cruel will with him, as if his wishes, his feelings, had simply no existence at all; it cut his throat and watched him gasp out his life. And now was one to believe that there was nowhere a god of hogs, to whom this hog personality was precious, to whom these hog squeals and agonies had a meaning? Who would take this hog into his arms and comfort him, reward him for his work well done, and show him the meaning of his sacrifice?

Perhaps some glimpse of all this was in the thoughts of our humble-minded Jurgis, as he turned to go on with the rest of the party, and muttered: “Dieve — but I’m glad I’m not a hog!”

The human baby, the human being, is a mosaic of animal and angel.

Added on 5-May-20 | Last updated 5-May-20
Link to this post | No comments
Topics: angel, animal, human nature, humanity
More quotes by Bronowski, Jacob

My definition of Man is “a Cooking animal.” The beasts have memory, judgment, and all the faculties and passions of our mind, in a certain degree; but no beast is a cook. … Man alone can dress a good dish; and every man whatever is more or less a cook, in seasoning what he himself eats.

Unlike most quoted Boswell, this is his own thought, not that of Samuel Johnson, recounting a conversation he had with Edmund Burke.

Until one has loved an animal, a part of one’s soul remains unawakened.

Widely attributed to France, but unsourced.

Man is a successful animal, that’s all.

Man is the only animal who does not feel at home in nature, who can feel evicted from paradise, the only animal for whom his own existence is a problem that he has to solve and from which he cannot escape.

Sometimes elided, "Man is the only animal for whom his own existence is a problem he has to solve."

Man is a social animal who dislikes his fellow man.

But man is a Noble Animal, splendid in ashes, and pompous in the grave, solemnizing Nativities and Deaths with equall lustre, nor omitting Ceremonies of bravery, in the infamy of his nature.

At twenty a man is a Peacock, at thirty a Lion, at forty a Camel, at fifty a Serpent, at sixty a Dog, at seventy an Ape, at eighty nothing.

If a man is not rising upwards to be an angel, depend upon it, he is sinking downwards to be a devil. He cannot stop at the beast. The most savage of men are not beasts; they are worse, a great deal worse. 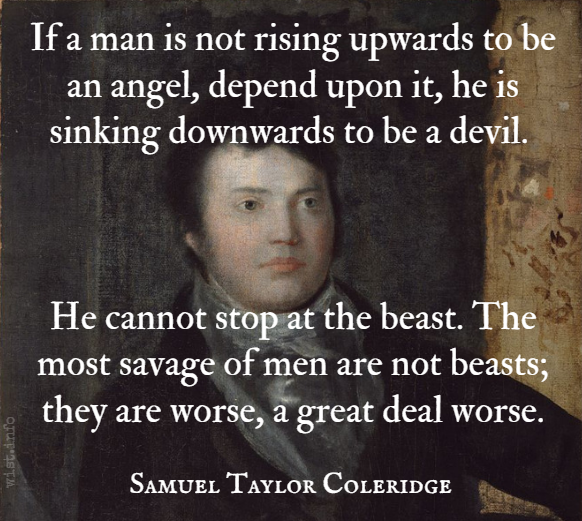 We’re animals. We’re born like every other mammal and we live our whole lives around disguised animal thoughts.

I will never laugh at anyone for grieving over a loved beast. I think God wants us to love Him more, not to love creatures (even animals) less. We love everything in one way too much (i.e., at the expense of our love for Him), but in another way we love everything too little. No person, animal, flower, or even pebble has ever been loved too much — i.e., more than every one of God’s works deserves.

Whether you believe that life evolved over billions of years or God made everything, you can’t justify torturing an animal for a shampoo.

Of all the creatures that creep, swim, or fly,
Peopling the earth, the waters, and the sky,
From Rome to Iceland, Paris to Japan,
I really think the greatest fool is man.

Man is the Only Animal that Blushes. Or needs to. 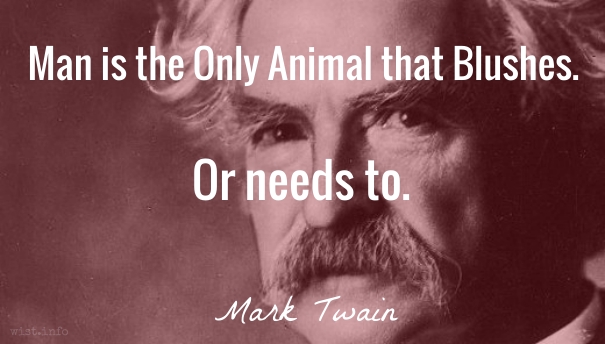 I am sorry to hear of the little dog’s death. The animal creation is a strange mystery. We can make some attempt to understand human suffering: but the sufferings of animals from the beginning of the world till now (inflicted not only by us but by one another) — what is one to think? And again, how strange that God brings us into such intimate relations with creatures of whose real purpose and destiny we remain forever ignorant. We know to some degree what angels and men are for. But what is a flea for, or a wild dog?

You never see animals going through the absurd and often horrible fooleries of magic and religion. … Dogs do not ritually urinate in the hope of persuading heaven to do the same and send down rain. Asses do not bray a liturgy to cloudless skies. Nor do cats attempt, by abstinence from cat’s meat, to wheedle the feline spirits into benevolence. Only man behaves with such gratuitous folly. It is the price he has to pay for being intelligent but not, as yet, quite intelligent enough.

But he who is unable to live in society, or who has no need because he is sufficient for himself, must be either a beast or a god: he is no part of a state.

Sometimes altered to end "... and what they might have been."