Death is an endless night so awful to contemplate that it can make us love life and value it with such passion that it may be the ultimate cause of all joy and all art.

If you stay alive for no other reason at all, please do it for spite.

The instinct for self-deception in human beings makes them try to banish from their minds dangers of which at bottom they are perfectly aware by declaring them non-existent.

Only ambition is fired by the coincidences of success and easy accomplishment but nothing is quite as splendidly uplifting to the heart as the defeat of a human being who battles against the invincible superiority of fate. This is always the most grandiose of all tragedies, one sometimes created by a dramatist but created thousands of times by life.

If fate means you to lose, give him a good fight anyhow.

And what is an authentic lunatic? He is a man who has preferred to become what is socially understood as mad rather than forfeit a certain superior idea of human honor. In its asylums, society has managed to strangle all those it has wished to rid itself of or defend itself from, because they refused to make themselves accomplices to various flagrant dishonesties. For a lunatic is also a man whom society has not wished to listen to, and whom it is determined to prevent from uttering unbearable truths.

And what is an authentic madman? It is a man who preferred to become mad, in the socially accepted sense of the word, rather than forfeit a certain superior idea of human honor. So society has strangled in its asylums all those it wanted to get rid of or protect itself from, because they refused to become its accomplices in certain great nastinesses. For a madman is also a man whom society did not want to hear and whom it wanted to prevent from uttering certain intolerable truths.

If I commit suicide, it will not be to destroy myself but to put myself back together again. Suicide will be for me only one means of violently reconquering myself, of brutally invading my being, of anticipating the unpredictable approaches of God. By suicide, I reintroduce my design in nature, I shall for the first time give things the shape of my will.

Original French. After being diagnosed with colorectal cancer in 1948, Artaud died of poisoning, possibly a suicide.

For I have promised to do the battle to the uttermost, by faith of my body, while me lasteth the life, and therefore I had liefer to die with honour than to live with shame; and if it were possible for me to die an hundred times, I had liefer to die oft than yield me to thee; for though I lack weapon, I shall lack no worship, and if thou slay me weaponless that shall be thy shame.”

I intend to do what little one man can do to awaken the public conscience, and in the meantime I am not frightened by your menaces. I am not a giant physically; I shrink from pain and filth and vermin and foul air, like any other man of refinement; also, I freely admit, when I see a line of a hundred policemen with drawn revolvers flung across a street to keep anyone from coming onto private property to hear my feeble voice, I am somewhat disturbed in my nerves. But I have a conscience and a religious faith, and I know that our liberties were not won without suffering, and may be lost again through our cowardice. I intend to do my duty to my country.

Reprinted in his Autobiography (1962).

For those who believe in God, most of the big questions are answered. But for those of us who can’t readily accept the God formula, the big answers don’t remain stone-written. We adjust to new conditions and discoveries. We are pliable. Love need not be a command or faith a dictum. I am my own God. We are here to unlearn the teachings of the church, state and our educational system. We are here to drink beer. We are here to kill war. We are here to laugh at the odds and live our lives so well that Death will tremble to take us. 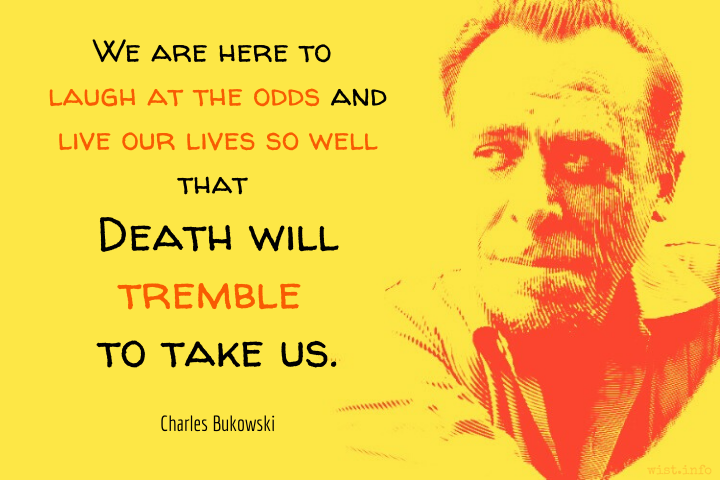 If we must die, let it not be like hogs
Hunted and penned in an inglorious spot,
While round us bark the mad and hungry dogs,
Making their mock at our accursed lot.

And remember, your critics want you to be as unhappy, unfulfilled and unimportant as they are. Let your happiness eat them up from inside.

There are circumstances which have to do with simple human honor. No matter the risk. To resist and not surrender.

If you can’t joke about the most horrendous things in the world, what’s the point of jokes? What’s the point in having humor? Humor is to get us over terrible things. That’s all it’s for. That’s why you should laugh at funerals. Of course it’s the wrong thing to say. That’s why it’s funny. 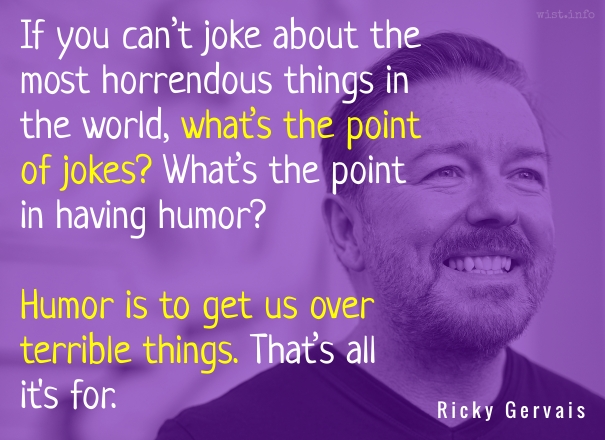 Villainy, when detected, never gives up, but boldly adds impudence to imposture. 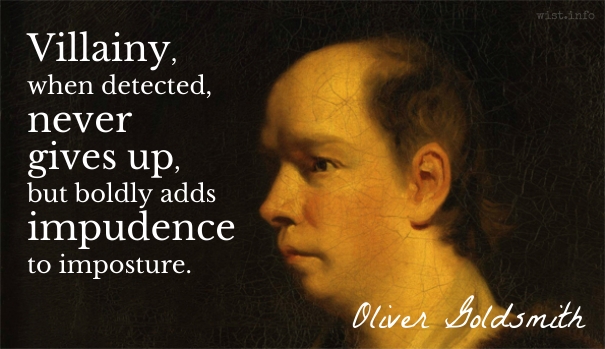 Happy the man, and happy he alone,
He, who can call to-day his own:
He who, secure within, can say,
Tomorrow do thy worst, for I have lived today.

We who think we are about to die will laugh at anything.

I may stand alone,
But would not change my free thoughts for a throne.

Added on 13-May-14 | Last updated 13-May-14
Link to this post | No comments
Topics: defiance, freedom, liberty
More quotes by Byron, George Gordon, Lord

What is the point of having free will if one cannot occasionally spit in the eye of destiny?

There can be no higher law in journalism than to tell the truth and shame the devil.

I would say to the House, as I said to those who have joined this Government: “I have nothing to offer but blood, toil, tears and sweat.” We have before us an ordeal of the most grievous kind. We have before us many, many long months of struggle and of suffering. You ask, what is our policy? I can say: It is to wage war, by sea, land and air, with all our might and with all the strength that God can give us; to wage war against a monstrous tyranny, never surpassed in the dark, lamentable catalogue of human crime. That is our policy. You ask, what is our aim? I can answer in one word: It is victory, victory at all costs, victory in spite of all terror, victory, however long and hard the road may be; for without victory, there is no survival.

Churchill's first speech in the House after becoming prime minister. Often paraphrased, "I have nothing to offer but blood, sweat and tears..."  Audio records of the speech omit the "It is" in the beginning of the "Victory" section.

In the depth of winter, I finally learned that within me there lay an invincible summer. 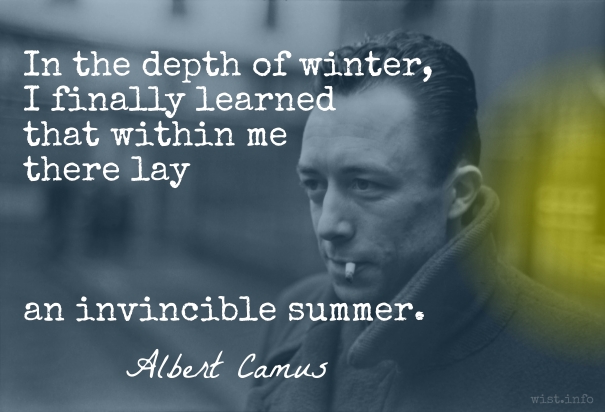 Whenever the devil harasses you, seek the company of men or drink more, or joke and talk nonsense, or do some other merry thing. Sometimes we must drink more, sport, recreate ourselves, aye, and even sin a little to spite the devil, so that we leave him no place for troubling our consciences with trifles. We are conquered if we try too conscientiously not to sin at all. So when the devil says to you: “Do not drink,” answer him: “I will drink, and right freely, just because you tell me not to.” One must always do what Satan forbids.

Alt. trans.: "We are soon defeated if we try too hard not to sin. So when the devil says ‘Do not drink’ answer him: ‘I shall drink, and right freely, just because you tell me not to!’"

I cannot and will not recant anything, for to go against conscience neither right nor safe. Here I stand. I can do no other, so help me God. Amen.

The soul, secured in her existence, smiles
At the drawn dagger, and defies its point.

The world is so exquisite with so much love and moral depth, that there is no reason to deceive ourselves with pretty stories for which there’s little good evidence. Far better it seems to me, in our vulnerability, is to look death in the eye and to be grateful every day for the brief but magnificent opportunity that life provides.

Humor is just another defense against the universe.

There comes a time in every normal man’s life when he must be tempted to spit on his hands, hoist the black flag and begin slitting throats.

And if I laugh at any mortal thing,
‘Tis that I may not weep.