They had all been brought up, as we still are, to believe in “the deterrent.” Firm resolve, a readiness to threaten war, would avert war itself. Some Power would always give way. This usually happened, indeed happened so often that the wisdom of the method seemed sure. In 1914 all the Powers, for different reasons, expected the yielding to come from the other side.

Every morning is a fresh beginning,
Listen my soul to the glad refrain.
And, spite of old sorrows
And older sinning,
Troubles forecasted
And possible pain,
Take heart with the day and begin again. 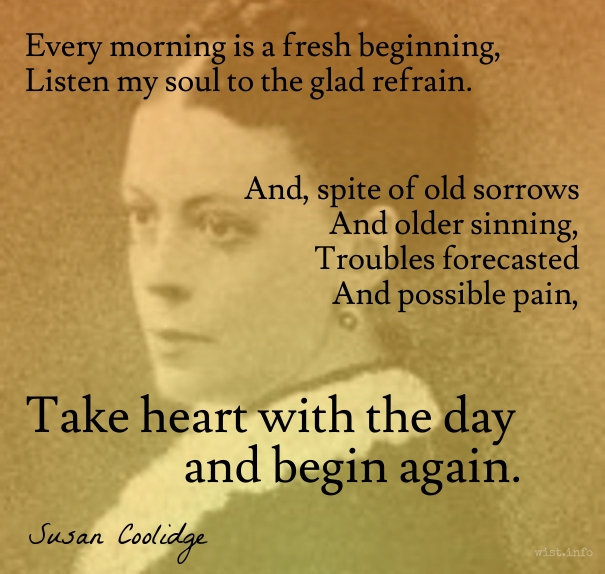 Deliberate with caution, but act with decision; and yield with graciousness, or oppose with firmness.

If you can trust yourself when all men doubt you,
But make allowance for their doubting, too ….

And for the support of this Declaration, with a firm reliance on the protection of divine Providence, we mutually pledge to each other our Lives, our Fortunes and our sacred Honor.

As modified and approved by the Continental Congress.

‘Twas blow for blow, disputing inch by inch,
For one would not retreat, nor t’other flinch.

God give us men. The time demands
Strong minds, great hearts, true faith, and willing hands;
Men whom the lust of office does not kill;
Men whom the spoils of office cannot buy;
Men who possess opinions and a will;
Men who have honor; men who will not lie;
Men who can stand before a demagogue
And damn his treacherous flatteries without winking;
Tall men, sun-crowned, who live above the fog
In public duty and in private thinking ….

Adapted by Martin Luther King in 1956: "God give us leaders. A time like this demands great leaders. Leaders whom the fog of life cannot chill, men whom the lust of office cannot buy. Leaders who have honor, leaders who will not lie. Leaders who will stand before a pagan god and damn his treacherous flattery."

Yet for a long time mortal men have discussed the question whether success in arms depends more on strength of body or excellence of mind; for before you begin, deliberation is necessary, when you have deliberated, prompt action. Thus each of these, being incomplete of itself, requires the other’s aid.

"But a just estimate of our mental and bodily faculties was not easily made. Which of them was most conducive to the success of military operations, was in former times a question much agitated, and long undecided. It is evident, however, that before the undertaking of a warlike enterprise, judgment is required to concert and plan the necessary measures; vigor in execution is equally necessary. The powers of man, in their separate functions feeble and ineffectual, demand each other's aid, and flourish by mutual assistance." [tr. Murphy (1807)]

"It has, however, been a great and long debate, whether success in war is most owing to bodily strength or mental abilities: for, as counsel is necessary before we enter on action, after measures are duly concerted, speedy execution is equally necessary; so that neither of these being sufficient singly, they prevail only by the assistance of each other." [tr. Rose (1831)]

"But there has been for a long time a great debate amongst mortals, whether the science of war advanced more by the strength of body or by the abilities of the mind. For both before you begin there is need of counsel; and when you have counselled, there is need of vigorous execution. So whilst both by themselves are defective, the one is strengthened by the assistance of the other." [Source (1841)]

"Yet it was long a subject of dispute among mankind, whether military efforts were more advanced by strength of body, or by force of intellect. For, in affairs of war, it is necessary to plan before beginning to act, and, after planning, to act with promptitude and vigor. Thus, each being insufficient of itself, the one requires the assistance of the other." [tr. Watson (1867)]

"Not it was long hotly contested among men whether military success was more advanced by mental ability or by bodily strength, for what we need is deliberation before we begin, and after deliberation, then well-timed action; either of itself is deficient and lacks the other's help." [tr. Pollard (1882)]

"Yet for a long time there was considerable dispute amongst mortals as to whether it was through the power of the body or the prowess of the mind that military affairs made greater progress. For, before you begin, deliberation is necessary, and, when you have deliberated, speedy action: hence each element, deficient on its own, requires the help of the other." [tr. Woodman (2007)]

Be not the slave of your own past.

Finally, whether you are citizens of America or citizens of the world, ask of us the same high standards of strength and sacrifice which we ask of you. With a good conscience our only sure reward, with history the final judge of our deeds, let us go forth to lead the land we love, asking His blessing and His help, but knowing that here on earth God’s work must truly be our own.

A portion of this is one of the seven quotations by JFK at his grave site in Arlington National Ceremony.

There comes a time in every normal man’s life when he must be tempted to spit on his hands, hoist the black flag and begin slitting throats.

Niebuhr at one point claimed authorship (and took copyright fees from Hallmark Cards), but later on denied he had written it. It was later adopted by Alcoholics Anonymous. Discussion of the actual authorship here.

Always bear in mind that your own resolution to succeed is more important than any one thing.