The faithful labors of many Witnesses of Jesus Christ, extant to the world, abundantly proving, that the Church of the Jews under the Old Testament in the type, and the Church of the Christians under the New Testament in the Antitype, were both separate from the world; and that when they have opened a gap in the hedge or wall of Separation between the Garden of the Church and the Wilderness of the world, God hath ever broke down the wall itself, removed the Candlestick, etc., and made his Garden a Wilderness, as at this day.


Writing of the blending of church and state, and resulting religious persecution, in Massachusetts. Likely origin of the "wall of separation between church and state" used by Jefferson.

If there is one thing which a comparative study of religions places in the clearest light, it is the inevitable decay to which every religion is exposed. It may seem almost like a truism, that no religion can continue to be what it was during the lifetime of its founder and its first apostles. Yet it is but seldom borne in mind that without constant reformation, i.e. without a constant return to its fountain-head, every religion, even the most perfect, nay the most perfect on account of its very perfection, more even than others, suffers from its contact with the world, as the purest air suffers from the mere fact of its being breathed.

Money is said to be power, which is, in some cases, true; and the same may be said of knowledge; but superior sobriety, industry and activity, are a still more certain source of power; for without these, knowledge is of little use; and, as to the power which money gives, it is that of brute force, it is the power of the bludgeon and the bayonet, and of the bribed press, tongue and pen.

Pleasure’s a sin, and sometimes sin’s a pleasure. 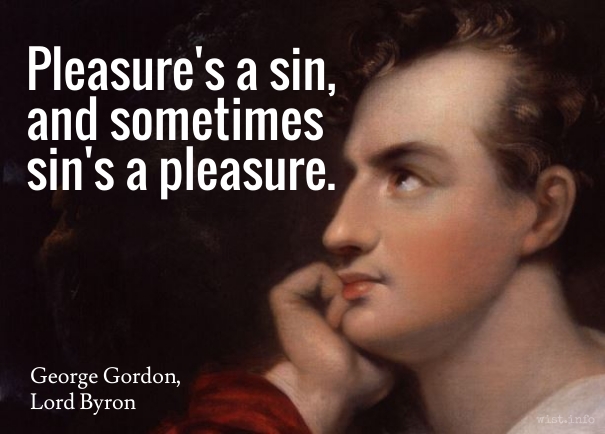 The actions that are produced by selfish motives are obvious, since they include sexual immorality, moral corruption, doing whatever feels good, idolatry, drug use and casting spells, hate, fighting, obsession, losing your temper, competitive opposition, conflict, selfishness, group rivalry, jealousy, drunkenness, partying, and other things like that. I warn you as I have already warned you, that those who do these kinds of things won’t inherit God’s kingdom.

The knowledge of the world is only to be acquired in the world, and not in the closet.

That observation which is called knowledge of the world will be found much more frequently to make men cunning than good.

Prosperity has damn’d more Souls, than all the Devils together.

But, good my brother,
Do not, as some ungracious pastors do,
Show me the steep and thorny way to heaven,
Whiles, like a puffed and reckless libertine,
Himself the primrose path of dalliance treads
And recks not his own rede.

Lord, Lord, how this world is given to lying!