I knew him tyrannous, and tyrants’ fears
Decrease not but grow faster than the years

Any historian of warfare knows it is in good part a comedy of errors and a museum of incompetence; but if for every error and every act of incompetence one can substitute an act of treason, many points of fascinating interpretation are open to the paranoid imagination. In the end, the real mystery, for one who reads the primary works of paranoid scholarship, is not how the United States has been brought to its present dangerous position but how it has managed to survive at all.

We are all sufferers from history, but the paranoid is a double sufferer, since he is afflicted not only by the real world, with the rest of us, but by his fantasies as well.

But the modern right wing, as Daniel Bell has put it, feels dispossessed: America has been largely taken away from them and their kind, though they are determined to try to repossess it and to prevent the final destructive act of subversion. The old American virtues have already been eaten away by cosmopolitans and intellectuals; the old competitive capitalism has been gradually undermined by socialistic and communistic schemers; the old national security and independence have been destroyed by treasonous plots, having as their most powerful agents not merely outsiders and foreigners as of old but major statesmen who are at the very centers of American power. Their predecessors had discovered conspiracies; the modern radical right finds conspiracy to be betrayal from on high.

The enemy is clearly delineated: he is a perfect model of malice, a kind of amoral superman—sinister, ubiquitous, powerful, cruel, sensual, luxury-loving. Unlike the rest of us, the enemy is not caught in the toils of the vast mechanism of history, himself a victim of his past, his desires, his limitations. He wills, indeed he manufactures, the mechanism of history, or tries to deflect the normal course of history in an evil way. He makes crises, starts runs on banks, causes depressions, manufactures disasters, and then enjoys and profits from the misery he has produced. The paranoid’s interpretation of history is distinctly personal: decisive events are not taken as part of the stream of history, but as the consequences of someone’s will.

Sickness and sorrows come and go, but a superstitious soul hath no rest. 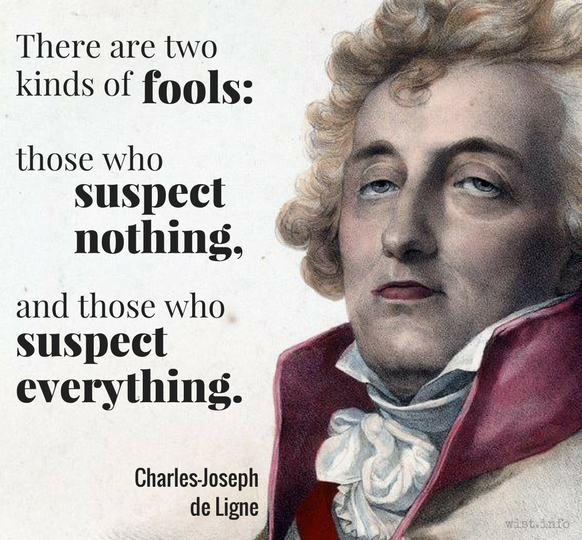 Captain, the problem is not that I’m paranoid. The problem is that the universe keeps justifying my paranoia.

It’s one thing to be aware of complex strategies and lies that might be going on around you. It’s another to let yourself become so worried about deception that you become paralyzed.

Once you get it into your head that somebody is controlling events, you can interpret everything in that light and find no reasonable certainty anywhere.

The higher paranoid scholarship is nothing if not coherent — in fact the paranoid mind is far more coherent than the real world.

As a member of the avant-garde who is capable of perceiving the conspiracy before it is fully obvious to an as yet unaroused public, the paranoid is a militant leader. He does not see social conflict as something to be mediated and compromised, in the manner of the working politician. Since what is at stake is always a conflict between absolute good and absolute evil, what is necessary is not compromise but the will to fight things out to a finish. Since the enemy is thought of as being totally evil and totally unappeasable, he must be totally eliminated — if not from the world, at least from the theatre of operations to which the paranoid directs his attention. This demand for total triumph leads to the formulation of hopelessly unrealistic goals, and since these goals are not even remotely attainable, failure constantly heightens the paranoid’s sense of frustration. Even partial success leaves him with the same feeling of powerlessness with which he began, and this in turn only strengthens his awareness of the vast and terrifying quality of the enemy he opposes.

There is a hate layer of opinion and emotion in America. There will be other McCarthys to come who will be hailed as its heroes.

Lerner coined the term "McCarthyism" in this article. In 1954, he wrote, "For my own part I doubt seriously whether the word will outlast the political power of the man from whom it derives."

Bad rulers … are in constant fear lest others are conspiring to inflict upon them the punishment which they are conscious of deserving.

Nations love dangers, and when there are none to be found create them to fill the want.

Rabid suspicion has nothing in it of skepticism. The suspicious mind believes more than it doubts. It believes in a formidable and ineradicable evil lurking in every person.

Any manifest error on the part of an enemy should make us suspect some stratagem.

I believe that that community is already in process of dissolution where each man begins to eye his neighbor as a possible enemy, where non-conformity with the accepted creed, political as well as religious, is a mark of disaffection; where denunciation, without specification or backing, takes the place of evidence; where orthodoxy chokes freedom of dissent; where faith in the eventual supremacy of reason has become so timid that we are not enter our convictions into the open list, to win or lose. Such fears as these are a solvent which can eat out the cement that binds the stones together; they may in the end subject us to a despotism as evil as any that we dread; and they can be allayed only in so far as we refuse to proceed on suspicion, and trust one another until we have tangible ground for misgiving,

You probably wouldn’t worry about what people think of you if you could know how seldom they do.

Also frequently attributed to Mark Twain, Eleanor Roosevelt, and Ethel Barrett; the latter used it ("We would worry less about what others think of us, if we realized how seldom they do") in her 1968 book Don’t Look Now But Your Personality is Showing. See here for more information.

Hastur was paranoid, which was simply a sensible and well-adjusted reaction to living in Hell, where they really were all out to get you.

Par-runts of rugmonkeys everywhere are worrying that their children will want to become Force-wielding breath masked Sithlords? Sweet Cream-of-Jesus on TOAST POINTS, people!! So now we have to fear that every crib-lizard that loves Anakin Skywalker will become Evil Incarnate. It’s been a lovely planet, but I think I need to go, now.