I knew him tyrannous, and tyrants’ fears
Decrease not but grow faster than the years

Despotic authority attaches great importance to being considered strong, and much less to being admired for its wisdom. Besides, what does wisdom mean to a despot? It means skill in the use of power. The wise despot knows when and how to strike. This continual display of power is necessary because, at root, any dictatorship appeals to the lowest instincts of the governed: fear, aggressiveness toward one’s neighbors, bootlicking. Terror most effectively excites such instincts, and fear of strength is the wellspring of terror.

The mistake is to assume that rulers who came to power through institutions cannot change or destroy those very institutions — even when that is exactly what they have announced that they will do.

Added on 12-May-21 | Last updated 12-May-21
Link to this post | No comments
Topics: corruption, exploitation, institutions, ruler, tyrant
More quotes by Snyder, Timothy

Their guards also are such as are used in a kingly government, not a despotic one; for the guards of their kings are his citizens, but a tyrant’s are foreigners. The one commands, in the manner the law directs, those who willingly obey; the other, arbitrarily, those who consent not. The one, therefore, is guarded by the citizens, the other against them.

The only man for whom Hitler had “unqualified respect” was “Stalin the genius,” and while in the case of Stalin and the Russian regime we do not have (and presumably never will have) the rich documentary material that is available for Germany, we nevertheless know since Khrushchev’s speech before the Twentieth Party Congress that Stalin trusted only one man and that was Hitler.

AGATHA: … But after that, I’d better see some cake.
TARVEK: You know, there’s more to being an evil despot than getting cake whenever you want it.
AGATHA: If that’s what you think, then you’re doing it wrong! 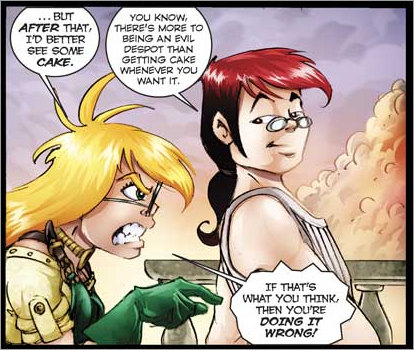 In Agatha H. and the Siege of Mechanicsburg (2020) [with Kaja Foglio], this is rendered:

“But after that, I’d better see some cake.”

Tarvek glanced at her. “You know, there’s more to being an evil despot than getting cake whenever you want it.”

Agatha thought about this and was filled with a sudden conviction, one that would stand the test of time through everything else that happened to her through the years. “If that’s what you think, then you’re doing it wrong.”

The tyrant grinds down his slaves and they don’t turn against him, they crush those beneath them.

This hand, to tyrants ever sworn the foe,
For Freedom only deals the deadly blow;
Then sheathes in calm repose the vengeful blade,
For gentle peace in Freedom’s hallowed shade.

It’s said that “power corrupts,” but actually it’s more true that power attracts the corruptible. The sane are usually attracted by other things than power. When they do act, they think of it as service, which has limits. The tyrant, though, seeks mastery, for which he is insatiable, implacable.

Often paraphrased: "It is said that power corrupts, but actually it's more true that power attracts the corruptible. The sane are usually attracted by other things than power." See Frank Herbert.

A well run tyranny is almost as scarce as an efficient democracy.

The hero saves us. Praise the hero! Now, who will save us from the hero?

If I had to choose, I should detest the tyranny of one man less than that of many. A despot always has his good moments; an assembly of despots never.

Let them take arms. The remedy is to set them right as to facts, pardon and pacify them. What signify a few lives lost in a century or two? The tree of liberty must be refreshed from time to time with the blood of patriots and tyrants. It is it’s natural manure.

It is the old practice of despots to use a part of the people to keep the rest in order.

For somehow this is tyranny’s disease, to trust no friends.

Alternate translation: "In every tyrant's heart there springs in the end this poison, that he cannot trust a friend."

We must not conclude merely upon a man’s haranguing upon liberty, and using the charming sound, that he is fit to be trusted with the liberties of his country. It is not unfrequent to hear men declaim loudly upon liberty, who, if we may judge by the whole tenor of their actions, mean nothing else by it but their own liberty, — to oppress without control or the restraint of laws all who are poorer or weaker than themselves.

Any excuse will serve a tyrant.

If you don’t understand that you work for your mislabeled subordinates, then you know nothing of leadership. You know only tyranny.

He that fears you present, will hate you absent.