A person who has no genuine sense of pity for the weak is missing a basic source of strength, for one of the prime moral forces that comprise greatness and strength of character is a feeling of mercy. The ruthless man, au fond, is always a weak and frightened man.

When the weak want to give an impression of strength they hint meaningfully at their capacity for evil. It is by its promise of a sense of power that evil often attracts the weak.

The man in the factory who has had to batter his way up through life in order to exist; the woman in the household, fending for her husband, her children; wary of deceit and false-dealing and bullying in the course of her busy day, know (and knew) instinctively that the bully must be met with instant repulse or he multiplies his own violence. A placated bully is a hand-fed bully. A Chamberlain, creapping home under the protection of his umbrella, tricked and ridiculed by the enemy, mouthing the peace-in-our-time fallacy, can cause the destruction of our world; and nearly did. One thing I’ve learned in life; you cannot placate the power-mad. You must — to paraphrase an old saying — take the bully by the horns. Early.

And the man who is arrogant belittles his victim. For arrogance is doing and saying things which bring shame to the victim, not in order that something may come out of it for the doer other than the mere fact it happened, but so that he may get pleasure. […] The cause of the pleasure enjoyed by those who are arrogant is that they think that in doing ill they are themselves very much superior. That is why the young and the wealthy are arrogant. For they think that in being arrogant they are superior.

Freese notes, "In Attic law ὕβρις (insulting, degrading treatment) was a more serious offence than αἰκία (bodily ill-treatment). It was the subject of a State criminal prosecution (γραφή), αἰκία of a private action (δίκη) for damages. The penalty was assessed in court, and might even be death."

The contumelious, too, commits slight -- for contumely is the infliction of injury and pain under such circumstances as cause shame to the sufferer, not that any good may accrue to himself (the agent) other than the act itself, but that he may be pleased. [...] The reason of pleasure accruing to the contumelious is, that they think themselves rendered far superior by thus acting injuriously. Whence the young and the rich are contumelious, for they think that to give affront shews their superiority.
[Source (1847)]

He, too, who acts contumeliously manifests slight; for contumely is the doing and saying of those things about which the person who is the subject of this treatment, has feelings of delicacy, not with a view that any thing should accrue to himself, other than what arises to him in the act, but in order that he may be gratified. [...] Now the cause of the pleasure felt by those who act contumeliously, is that, by injuring, they conceive themselves to be more decidedly superior: on which account young men and the rich are given to contumely, for in manifesting the contumely, they conceive themselves superior.
[tr. Buckley (1850)]

The man who insults, again, slights; for insolence is to do and say things which shame the sufferer; not in order that anything may accrue to the insulter, or because anything has been done to him, but in order that he may have joy. [...] The source of pleasure to the insulters is this, -- they fancy that, by ill-treating the other people, they are showing the greater superiority. Hence young men and rich men are insolent; they fancy that, by insulting, they are superior.
[tr. Jebb (1873)]

Insolence is also a form of slighting, since it consists in doing and saying things that cause shame to the victim, not in order that anything may happen to yourself, or because anything has happened to yourself, but simply for the pleasure involved. [...] The cause of the pleasure thus enjoyed by the insolent man is that he thinks himself greatly superior to others when ill-treating them. That is why youths and rich men are insolent; they think themselves superior when they show insolence.
[tr. Roberts (1924)]

Similarly, he who insults another also slights him; for insult consists in causing injury or annoyance whereby the sufferer is disgraced, not to obtain any other advantage for oneself besides the performance of the act, but for one's own pleasure. [...] The cause of the pleasure felt by those who insult is the idea that, in ill-treating others, they are more fully showing superiority. That is why the young and the wealthy are given to insults; for they think that, in committing them, they are showing their superiority.
[tr. Freese (1926)]

And disparagement may be motivated by abusiveness, which is acting and speaking in such a way as to make your victim feel shame, not because you will gain from it, and not in response to anything that has happened to you, but just for the pleasure of it. [...] The reason why an abusive man feels pleasure is his belief that by treating others badly he increases his superiority to them. That is why youth and wealth make people abusive: they think that by insulting others they are establishing their superiority.
[tr. Waterfield (2018)]

And he who is insolent to someone also slights him, for insolence is doing and saying such things as are a source of shame to the person suffering them, not so that some other advantage may accrue to the insolent person or because something happened to him, but so that he may gain pleasure thereby. [...] And a cause of the pleasure the insolent feel is their supposing that, by inflicting harm, they themselves are to a greater degree superior. Hence the young and the wealthy are insolent, for they suppose that, by being insolent, they are superior.
[tr. Bartlett (2019)]

If people were always kind and obedient to those who are cruel and unjust; the wicked people would have it all their own way: they would never feel afraid, and so they would never alter, but would grow worse and worse. When we are struck at without a reason, we should strike back again very hard; I am sure we should — so hard as to teach the person who struck us never to do it again.

I know something about that war, and I never want to see that history repeated. But, my fellow Americans, it certainly can be repeated if the peace-loving democratic nations again fearfully practice a policy of standing idly by while big aggressors use armed force to conquer the small and weak.

I despise toadies who suck up to their bosses; they are generally the same people who bully their subordinates.

Self-hatred leads to the need either to dominate or to be dominated. 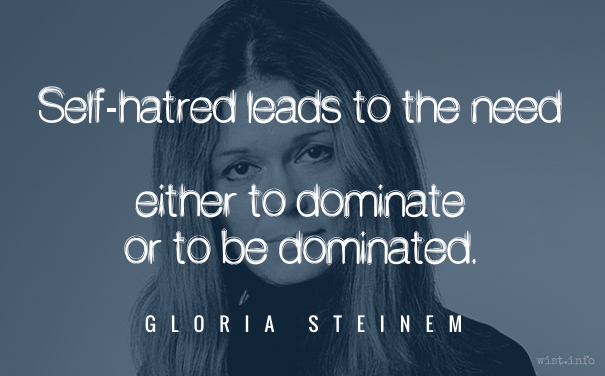 Gloria Steinem (b. 1934) American feminist, journalist, activist
Revolution from Within: A Book of Self-Esteem, “A Personal Preference” (1992)

A brave man is sometimes a desperado: a bully is always a coward.

The question [is] asked, “Is it common for a nation to obtain a redress of wrongs by war?” The answer to this question you will of course draw from history. In the meantime, reason will answer it on grounds of probability, that where the wrong has been done by a weaker nation, the stronger one has generally been able to enforce redress; but where by a stronger nation, redress by war has been neither obtained nor expected by the weaker. On the contrary, the loss has been increased by the expenses of the war in blood and treasure. Yet it may have obtained another object equally securing itself from future wrong. It may have retaliated on the aggressor losses of blood and treasure far beyond the value to him of the wrong he had committed, and thus have made the advantage of that too dear a purchase to leave him in a disposition to renew the wrong in future. In this way the loss by the war may have secured the weaker nation from loss by future wrong.

If there is no willingness to use force to defend civil society, it’s civil society that goes away, not force.

The Argument from Intimidation is a confession of intellectual impotence.

The strong do what they can, and the weak suffer what they must.

The moral dilemma that is presented to the weak in a world governed by the strong: Break the rules or perish.

He who has injured thee was either stronger or weaker than thee. If weaker, spare him; if stronger, spare thyself.

There are none more abusive to others than they that lie most open to it themselves; but the humor goes round, and he that laughs at me today will have somebody to laugh at him tomorrow.

Beating up “intellectuals” is the last refuge of demagogues.

Rudeness is the weak man’s imitation of strength.

When a resolute young fellow steps up to the great bully, the world, and takes him boldly by the beard, he is often surprised to find it comes off in his hand, and that it was only tied on to scare away the timid adventurers.

On Soviet intervention in Afghanistan.

The earliest variation on this thought appears to be from Paul Eldridge.

He that fears you present, will hate you absent.