The crucial disadvantage of aggression, competitiveness, and skepticism as national characteristics is that these qualities cannot be turned off at five o’clock.

Because we have sought to cover up past evil, though it still persists, we have been powerless to check the new evil of today. Evil unchecked grows, evil tolerated poisons the whole system. And because we have tolerated our past and present evils, international affairs are poisoned and law and justice have disappeared from them. 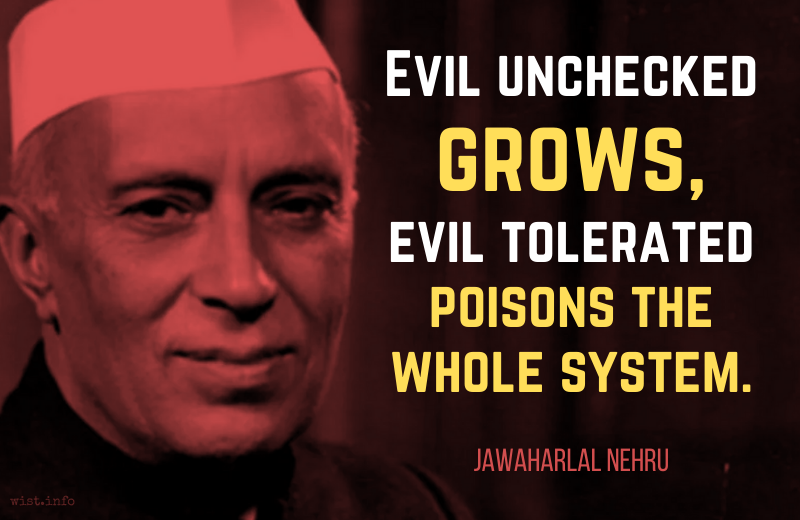 Nehru was comparing rising fascism to colonial imperialism, and the bombings of cities in Spain and China to ongoing British bombing of villages in the North-West Frontier of India. Collected in The Unity of India : Collected Writings, 1937-1940 (1942).

[Fascism] imagines the masses not as a pluralistic citizenry but as a primal horde whose power can be awakened by playing upon atavistic feelings of hatred and belonging. Its chosen leader must exhibit strength: his refusal to compromise and readiness to attack are seen as signs of tough-mindedness, while any concern for constitutionality or the rule of law are disdained as signs of weakness. The most powerful myth, however, is that of the embattled collective. Critics are branded as traitors, while those who do not fit the criteria for inclusion are vilified as outsiders, terrorists, and criminals.

I don’t have much truck with the “religion is the cause of most of our wars” school of thought because that is manifestly done by mad, manipulative and power-hungry men who cloak their ambition in God.

Indignation is the seducer of thought. No man can think clearly when his fists are clenched.

Compassion is not a popular virtue. Very often when I talk to religious people, and mention how important it is that compassion is the key, that it’s the sine qua non of religion, people look kind of balked, and stubborn sometimes, as much to say, “What’s the point of having religion if you can’t disapprove of other people?”

The chief reason warfare is still with us is neither a secret death-wish of the human species, nor an irrepressible instinct of aggression, nor, finally and more plausibly, the serious economic and social dangers inherent in disarmament, but the simple fact that no substitute for this final arbiter in international affairs has yet appeared on the political scene.

To believe that man’s aggressiveness or territoriality is in the nature of the beast is to mistake some men for all men, contemporary society for all possible societies, and, by a remarkable transformation, to justify what is as what needs must be; social repression becomes a response to, rather than a cause of, human violence.

Based on an address at Faculty of Medicine Day, McGill University Sesquicentennial Celebration, Montreal, Canada (1 Oct 1971).

Some people idealize force and pull it into the foreground and worship it, instead of keeping it in the background as long as possible. I think they make a mistake, and I think that their opposites, the mystics, err even more when they declare that force does not exist. I believe that it exists, and that one of our jobs is to prevent it from getting out of its box. It gets out sooner or later, and then it destroys us and all the lovely things which we have made. But it is not out all the time, for the fortunate reason that the strong are so stupid.

In case signals can neither be seen nor perfectly understood, no captain can do very wrong if he places his ship alongside that of an enemy. 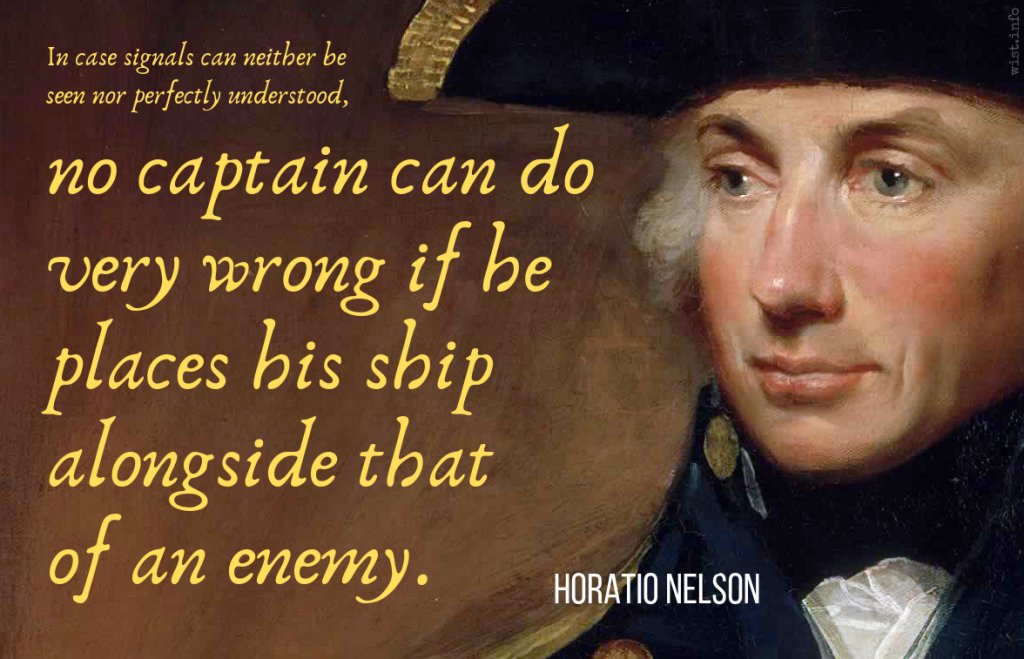 Once more unto the breach, dear friends, once more;
Or close the wall up with our English dead!
In peace, there’s nothing so becomes a man,
As modest stillness and humility:
But when the blast of war blows in our ears,
Then imitate the action of the tiger;
Stiffen the sinews, summon up the blood,
Disguise fair nature with hard-favored rage ….

We learned from Hitler at Munich that success only feeds the appetite of aggression.

Defending his decision to to not withdraw US troops from Vietnam.

[T]here are historic situations in which refusal to defend the inheritance of a civilization, however imperfect, against tyranny and aggression may result in consequences even worse than war.

But all history has taught us the grim lesson that no nation has ever been successful in avoiding the terrors of war by refusing to defend its rights — by attempting to placate aggression.

There is — in world affairs — a steady course to be followed between an assertion of strength that is truculent and a confession of helplessness that is cowardly.

Nationalism is not to be confused with patriotism. Both words are normally used in so vague a way that any definition is liable to be challenged, but one must draw a distinction between them, since two different and even opposing ideas are involved. By “patriotism” I mean devotion to a particular place and a particular way of life, which one believes to be the best in the world but has no wish to force upon other people. Patriotism is of its nature defensive, both militarily and culturally. Nationalism, on the other hand, is inseparable from the desire for power. The abiding purpose of every nationalist is to secure more power and more prestige, not for himself but for the nation or other unit in which he has chosen to sink his own individuality.

The chief reason warfare is still with us is neither a secret death wish of the human species, nor an irrepressible instinct of aggression, nor, finally and more plausibly, the serious economic and social dangers inherent in disarmament, but the simple fact that no substitute for this final arbiter in international affairs has yet appeared on the political scene.

Reprinted as "On Violence," Crises of the Republic (1969)

On Soviet intervention in Afghanistan.

But it must be remembered that, in spite of the proverb, it takes in reality only one to make a quarrel. It is useless for the sheep to pass resolutions in favour of vegetarianism, while the wolf remains of a different opinion.

Sometimes quoted as "while wolves remain of a different opinion."

“It needs but one foe to breed a war, not two, Master Warden,” answered Éowyn. “And those who have not swords can still die upon them.”