In short, the contradiction in the old defense of class stratification is that it defends leisure for the leisure class, but not for the underclass. With reference to the underclass, leisure is said to destroy the incentive to work, leads to slothfulness and self-indulgence, and retards cognitive and moral development. When applied to the leisure class, the concept evokes an image of Plato and Aristotle, whose leisure was based on slave labor, creating the intellectual foundations of Western civilization; or patrician slave-owners like Washington and Jefferson laying the foundations of American civilization; or creative aristocrats like Count Leo Tolstoy or Bertrand, Earl Russell; or, even closer to home, of our own sons and daughters (or of ourselves, when we were young adults) being freed from the stultifying tasks of earning a living until well into our adult years so that we could study in expensive universities to gain specialized knowledge and skills.

The Intellect engages us in the pursuit of Truth. The Passions impel us to Action.

Reflection is chiefly employed in the investigation of truth, appetite impels to action.
[tr. McCartney (1798)]

Reflection chiefly applies itself in the search of truth. Appetite prompts us to action.
[tr. Edmonds (1865)]

Thought is employed in the discovery of truth, appetite impels to action.
[tr. Gardiner (1899)]

Thought is occupied chiefly with the discovery of truth; impulse prompts to action.
[tr. Miller (1913)]

Thought is mostly expended in seeking out the truth, passion urges men to action.
[tr. Edinger (1974)]

The worst thing about war was the sitting around and wondering what you were doing morally.

In the middle of the night, things well up from the past that are not always cause for rejoicing — the unsolved, the painful encounters, the mistakes, the reasons for shame or woe. But all, good or bad, give me food for thought, food to grow on.

There is no doubt that solitude is a challenge and to maintain balance within it a precarious business. But I must not forget that, for me, being with people or even with one beloved person for any length of time without solitude is even worse. I lose my center. I feel dispersed, scattered, in pieces. I must have time alone in which to mull over my encounter, and to extract its juice, its essence, to understand what has really happened to me as a consequence of it.

For even the humblest person, a day spent without the sight or sound of beauty, the contemplation of mystery, or the search for truth and perfection is a poverty-stricken day; and a succession of such days is fatal to human life.

Indignation is the seducer of thought. No man can think clearly when his fists are clenched.

No matter what the belief, if it had modestly said, “This is our best thought, go on, think farther!” then we could have smoothly outgrown our early errors and long since have developed a religion such as would have kept pace with an advancing world. But we were made to believe and not allowed to think. We were told to obey, rather than to experiment and investigate.

Solitude is not lack.

Sometimes misquoted "Solitude is not a lack."

Anything becomes interesting if you look at it long enough. 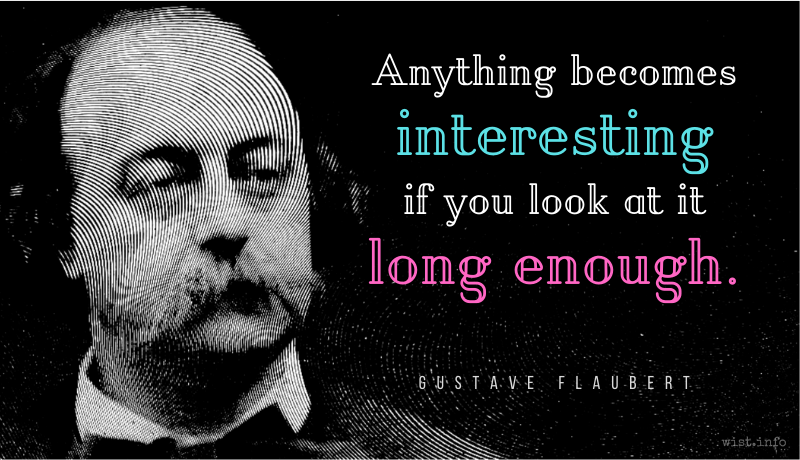 Alt. trans.: "To make something interesting, just look at it for a long time."

In meditation we should not look for a “method” or “system,” but cultivate an “attitude,” and “outlook”: faith, openness, attention, reverence, expectation, supplication, trust, and joy.

Anger blows out the lamp of the mind. In the examination of a great and important question, every one should be serene, slow-pulsed and calm.

One of the things I like best about animals in the wild is that they’re always off on some errand. They have appointments to keep. It’s only we humans who wonder what we’re here for.

anything or anyone
that does not bring you alive

is too small for you.

Truth is compar’d in Scripture to a streaming fountain; if her waters flow not in a perpetuall progression, they sick’n into a muddy pool of conformity and tradition.

[Truth is compared in Scripture to a streaming fountain; if her waters flow not in a perpetual progression, they sicken into a muddy pool of conformity and tradition.]

Be able to be alone. Loose not the advantage of Solitude, and the Society of thy self, nor be only content, but delight to be alone and single with Omnipresency.

I like the silent church before the service begins, better than any preaching.

Sometimes I don’t know if my life is complicated, or if it’s that I just think too much about things.

But the greatest gift in the power of loneliness to bestow is the realization that life does not consist either of wallowing in the past or of peering anxiously at the future; and it is appalling to contemplate the great number of often painful steps by which one arrives at a truth so old, so obvious, and so frequently expressed. It is good for one to appreciate that life is now. Whether it offers little or much, life is now — this day — this hour — and is probably the only experience of the kind one is to have.

Added on 25-May-16 | Last updated 25-May-16
Link to this post | No comments
Topics: anxiety, carpe diem, contemplation, future, live for today, past, regret
More quotes by Flandrau, Charles Macomb

I could wile away the hours
Conferrin’ with the flowers,
Consultin’ with the rain;
And my head I’d be scratchin’
While my thoughts were busy hatchin’,
If I only had a brain. 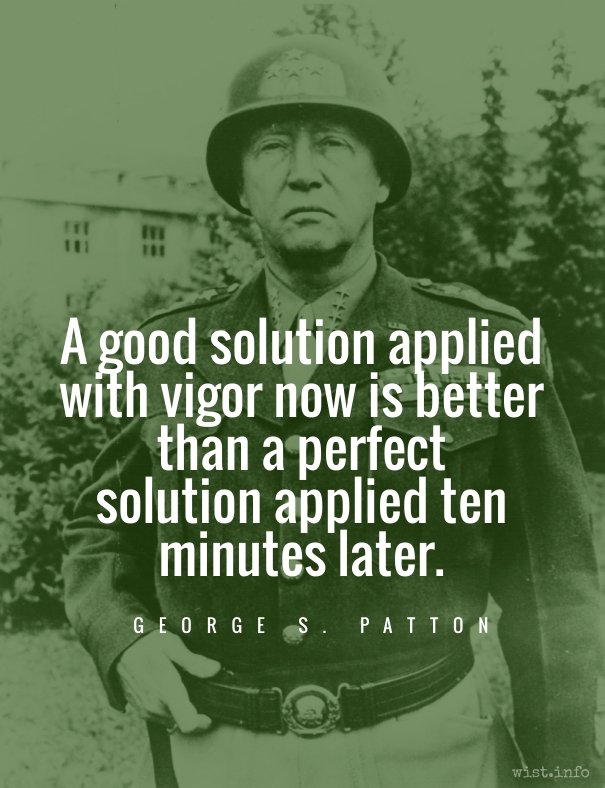 It’s what people know about themselves inside that makes them afraid.

It is infinitely difficult to know when and where one should stop, and for all but one in thousands the goal of their thinking is the point at which they have become tired of thinking.

Success for the most part attends those who act boldly, not those who weigh everything, and are slow to venture.

‘Patriotism is not enough.’ But neither is anything else. Science is not enough, religion is not enough, art is not enough, politics and economics are not enough, nor is love, nor is duty, nor is action however disinterested, nor, however sublime, is contemplation. Nothing short of everything will really do.

But in stating prudential rules for our government in society I must not omit the important one of never entering into dispute or argument with another. I never yet saw an instance of one of two disputants convincing the other by argument. I have seen many of their getting warm, becoming rude, & shooting one another. Conviction is the effect of our own dispassionate reasoning, either in solitude, or weighing within ourselves dispassionately what we hear from others standing uncommitted in argument ourselves.

If we are to survive, we must have ideas, vision, courage. These things are rarely produced by committees. Everything that matters in our intellectual and moral life begins with an individual confronting his own mind and conscience in a room by himself.

Self-knowledge is the beginning of self-improvement.

The question is: Bad as I am, have I the right to think? And I think I have for two reasons: First, I cannot help it. And secondly, I like it.

Learning makes a Man fit Company for himself.

To make a prairie it takes a clover and one bee,
One clover, and a bee,
And revery.
The revery alone will do,
If bees are few.

The world can only be grasped by action, not by contemplation. The hand is more important than the eye. We are active; and indeed we know, as something more than a symbolic accident in the evolution of man, that it is the hand that drives the subsequent evolution of the brain. We find tools today made by man before he became man. Benjamin Franklin in 1778 called man “a tool-making animal,” and that is right.

Illness is a convent which has its rule, its austerity, its silences, and its inspirations.

Thus conscience does make cowards of us all,
And thus the native hue of resolution
Is sicklied o’er with the pale cast of thought,
And enterprises of great pitch and moment
With this regard their currents turn awry
And lose the name of action.

"Conscience" in this case is used in its archaic form, as consciousness, awareness.

Solitude is as needful to the imagination as society is wholesome for the character.

The pillow is a silent Sibyl, and it is better to sleep on things beforehand than lie awake about them afterwards.

Thought is the labor of the intellect, reverie is its pleasure.

Act nothing in a furious Passion; it’s putting to Sea in a Storm.

I think and think for months and years. Ninety-nine times, the conclusion is false. The hundredth time I am right.