“But you were always a good man of business, Jacob,” faltered Scrooge, who now began to apply this to himself.

“You are fettered,” said Scrooge, trembling. “Tell me why?” 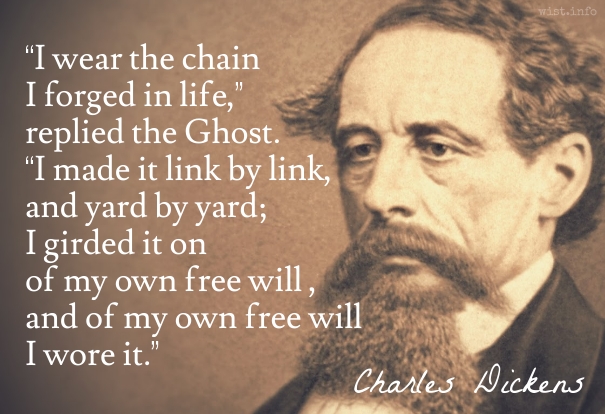 Sometimes oddly paraphrased, "We forge the chains we wear in life."

For it is good to be children sometimes, and never better than at Christmas, when its mighty Founder was a child Himself.

I am sure I have always thought of Christmas time, when it has come round — apart from the veneration due to its sacred name and origin, if anything belonging to it can be apart from that — as a good time; a kind, forgiving, charitable, pleasant time: the only time I know of, in the long calendar of the year, when men and women seem by one consent to open their shut-up hearts freely, and to think of people below them as if they really were fellow-passengers to the grave, and not another race of creatures bound on other journeys. And therefore, uncle, though it has never put a scrap of gold or silver in my pocket, I believe that it has done me good, and will do me good; and I say, God bless it!

“Christmas a humbug, uncle!” said Scrooge’s nephew. “You don’t mean that, I am sure.”

Scrooge having no better answer ready on the spur of the moment, said “Bah!” again; and followed it up with “Humbug.”

Darkness is cheap, and Scrooge liked it.

“Are there no prisons?” asked Scrooge.

“Plenty of prisons,” said the gentleman, laying down the pen again.

“And the Union workhouses?” demanded Scrooge. “Are they still in operation?”

“They are. Still,” returned the gentleman, “I wish I could say they were not.”

“The Treadmill and the Poor Law are in full vigour, then?” said Scrooge.

“Oh! I was afraid, from what you said at first, that something had occurred to stop them in their useful course,” said Scrooge. “I’m very glad to hear it.”

“Under the impression that they scarcely furnish Christian cheer of mind or body to the multitude,” returned the gentleman, “a few of us are endeavouring to raise a fund to buy the Poor some meat and drink and means of warmth. We choose this time, because it is a time, of all others, when Want is keenly felt, and Abundance rejoices. What shall I put you down for?”

“You wish to be anonymous?”

“I wish to be left alone,” said Scrooge. “Since you ask me what I wish, gentlemen, that is my answer. I don’t make merry myself at Christmas and I can’t afford to make idle people merry. I help to support the establishments I have mentioned — they cost enough; and those who are badly off must go there.”

“Many can’t go there; and many would rather die.”

“If they would rather die,” said Scrooge, “they had better do it, and decrease the surplus population. Besides — excuse me — I don’t know that.”

“It’s not my business,” Scrooge returned. “It’s enough for a man to understand his own business, and not to interfere with other people’s. Mine occupies me constantly. Good afternoon, gentlemen!”

Then Bob proposed: “A Merry Christmas to us all, my dears. God bless us!” Which all the family re-echoed.

“God bless us every one!” said Tiny Tim, the last of all.

It is an essential part of every national character to pique itself mightily upon its faults, and to deduce tokens of its virtue or its wisdom from their very exaggeration. One great blemish in the popular mind of America, and the prolific parent of an innumerable brood of evils, is Universal Distrust. Yet the American citizen plumes himself upon this spirit, even when he is sufficiently dispassionate to perceive the ruin it works; and will often adduce it, in spite of his own reason, as an instance of the great sagacity and acuteness of the people, and their superior shrewdness and independence.

Any man who attains a high place among you, from the President downwards, may date his downfall from that moment; for any printed lie that any notorious villain pens, although it militate directly against the character and conduct of a life, appeals at once to your distrust, and is believed. You will strain at a gnat in the way of trustfulness and confidence, however fairly won and well deserved; but you will swallow a whole caravan of camels, if they be laden with unworthy doubts and mean suspicions. Is this well, think you, or likely to elevate the character of the governors or the governed among you?

[F]or cheerfulness and content are great beautifiers, and are famous preservers of youthful looks, depend upon it.

Often given as "Cheerfulness and contentment are great beautifiers and are famous preservers of youthful looks."

I say, David, to the young this is a world for action, and not for moping and droning in.

Take nothing on its looks; take everything on evidence. There’s no better rule.

No one is useless in this world who lightens the burden of it for any one else. 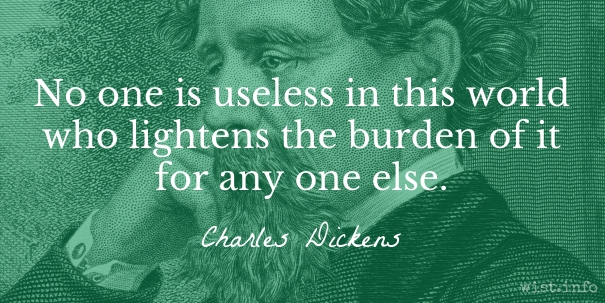 “It’s always best on these occasions to do what the mob do.”
“But suppose there are two mobs?” suggested Mr. Snodgrass.
“Shout with the largest,” replied Mr. Pickwick.

Reflect upon your present blessings — of which every man has many — not on your past misfortunes, of which all men have some. Fill your glass again, with a merry face and contented heart. Our life on it, but your Christmas shall be merry, and your new year a happy one!

There seems a magic in the very name of Christmas. Petty jealousies and discords are forgotten; social feelings are awakened in bosoms to which they have long been strangers; father and son, or brother and sister, who have met and passed with averted gaze, or a look of cold recognition, for months before, proffer and return the cordial embrace, and bury their past animosities in their present happiness.

O let us love our occupations,
Bless the squire and his relations,
Live upon our daily rations,
And always know our proper stations.

Oh the nerves, the nerves; the mysteries of this machine called Man! Oh the little that unhinges it: poor creatures that we are!

My life is one demd horrid grind.

Happy, happy Christmas, that can win us back to the delusions of our childish days; that can recall to the old man the pleasures of his youth; that can transport the sailor and the traveller, thousands of miles away, back to his own fire-side and his quiet home!

May I not be forgiven for thinking it is a wonderful testimony to my being made for art, that when in the midst of this trouble and pain I sit down to my book, some beneficent power shows it all to me and tempts me to be interested, and I don’t invent it — really do not — but see it and write it down?