People often say that a set of books looks ugly if all volumes are not in the same format, but I was impressed to hear the Abbot Koyu say, “It is typical of the unintelligent man to insist on assembling complete sets of everything. Imperfect sets are better.”

Every religion consists of moral precepts, & of dogmas. In the first they all agree. All forbid us to murder, steal, plunder, bear false witness Etc. and these are the articles necessary for the preservation of order, justice, & happiness in society. In their particular dogmas all differ; no two professing the same. These respect vestments, ceremonies, physical opinions, & metaphysical speculations, totally unconnected with morality, & unimportant to the legitimate objects of society. Yet these are the questions on which have hung the bitter schisms of Nazarenes, Socinians, Arians, Athanasians in former times, & now of Trinitarians, Unitarians, Catholics, Lutherans, Calvinists, Methodists, Baptists, Quakers Etc. Among the Mahometans we are told that thousands fell victims to the dispute whether the first or second toe of Mahomet was longest; & what blood, how many human lives have the words ‘this do in remembrance of me’ cost the Christian world!

We all agree in the obligation of the moral precepts of Jesus: but we schismatize & lose ourselves in subtleties about his nature, his conception maculate or immaculate, whether he was a god or not a god, whether his votaries are to be initiated by simple aspersion, by immersion, or without water; whether his priests must be robed in white, in black, or not robed at all; whether we are to use our own reason, or the reason of others, in the opinions we form, or as to the evidence we are to believe. It is on questions of this, & still less importance, that such oceans of human blood have been spilt, & whole regions of the earth have been desolated by wars & persecutions, in which human ingenuity has been exhausted in inventing new tortures for their brethren.

It is time then to become sensible how insoluble these questions are by minds like ours, how unimportant, & how mischievous; & to consign them to the sleep of death, never to be awakened from it. The varieties in the structure & action of the human mind, as in those of the body, are the work of our creator, against which it cannot be a religious duty to erect the standard of uniformity.

Jefferson seriously dialed back his actual response, though he kept both in his files; the final letter read, in this passage:

The interests of society require the observation of those moral precepts only in which all religions agree, (for all forbid us to murder, steal, plunder, or bear false witness.) and that we should not intermeddle with the particular dogmas in which all religions differ, and which are totally unconnected with morality. in all of them we see good men, & as many in one as another. The varieties in the structure & action of the human mind as in those of the body, are the work of our creator, against which it cannot be a religious duty to erect the standard of uniformity.

But is uniformity of opinion desirable? No more than of face and stature. Introduce the bed of Procrustes then, and as there is danger that the great men may beat the small, make us all of a size, by lopping the former and stretching the latter. Difference of opinion is advantageous in religion. The several sects perform the office of a Censor morum over each other. Is uniformity attainable? Millions of innocent men, women, and children, since the introduction of Christianity, have been burnt, tortured, fined, imprisoned; yet we have not advanced one inch towards uniformity. What has been the effect of coercion? To make one half the world fools, and the other half hypocrites. To support roguery and error all over the earth.

Struggles to coerce uniformity of sentiment in support of some end thought essential to their time and country have been waged by many good, as well as by evil, men. Nationalism is a relatively recent phenomenon, but, at other times and places, the ends have been racial or territorial security, support of a dynasty or regime, and particular plans for saving souls. As first and moderate methods to attain unity have failed, those bent on its accomplishment must resort to an ever-increasing severity. […] Those who begin coercive elimination of dissent soon find themselves exterminating dissenters. Compulsory unification of opinion achieves only the unanimity of the graveyard.

It is not best that we should all think alike; it is differences of opinion that make horse races. 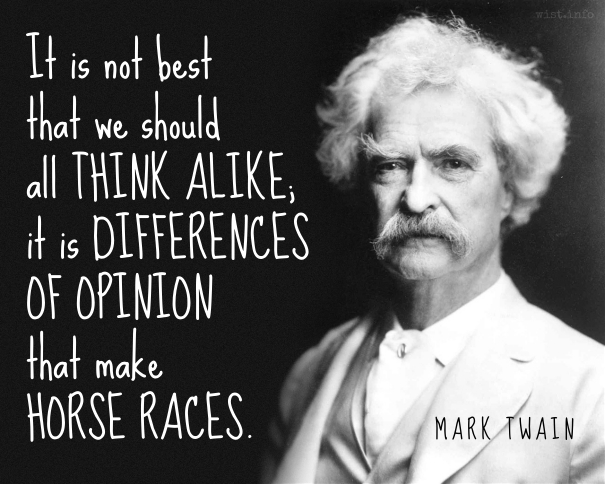 It is error alone which needs the support of government. Truth can stand by itself.