Today the Somme is a peaceful but sullen place, unforgetting and unforgiving. The people, who work largely at raising vegetables and grains, are “correct” but not friendly. To wander now over the fields destined to extrude their rusty metal fragments for centuries is to appreciate in the most intimate way the permanent reverberations of July, 1916. When the air is damp you can smell rusted iron everywhere, even though you only see wheat and barley.

The newspapers still talk about glory but the average man, thank God, has got rid of that illusion. It is a damned bore, with a stalemate as the most probable outcome, but one has to see it through, and see it through with the knowledge that whichever side wins, civilisation in Europe will be pipped for the next 30 years. Don’t indulge in Romance here, Malcolm, or suppose that an era of jolly little nationalities is dawning. We shall be much too much occupied with pestilence and poverty to reconstruct.

They were careless people, Tom and Daisy — they smashed up things and creatures and then retreated back into their money or their vast carelessness, or whatever it was that kept them together, and let other people clean up the mess they had made. 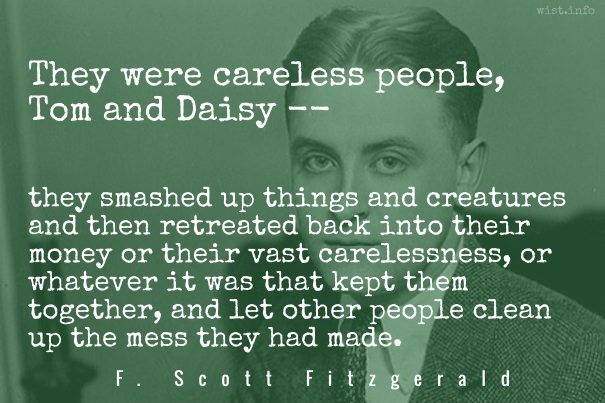