The first principle is that you must not fool yourself — and you are the easiest person to fool.

But there is one feature I notice that is generally missing in Cargo Cult Science. That is the idea that we all hope you have learned in studying science in school — we never explicitly say what this is, but just hope that you catch on by all the examples of scientific investigation. It is interesting, therefore, to bring it out now and speak of it explicitly. It’s a kind of scientific integrity, a principle of scientific thought that corresponds to a kind of utter honesty — a kind of leaning over backwards. For example, if you’re doing an experiment, you should report everything that you think might make it invalid — not only what you think is right about it: other causes that could possibly explain your results; and things you thought of that you’ve eliminated by some other experiment, and how they worked — to make sure the other fellow can tell they have been eliminated.

Details that could throw doubt on your interpretation must be given, if you know them. You must do the best you can — if you know anything at all wrong, or possibly wrong — to explain it. If you make a theory, for example, and advertise it, or put it out, then you must also put down all the facts that disagree with it, as well as those that agree with it. There is also a more subtle problem. When you have put a lot of ideas together to make an elaborate theory, you want to make sure, when explaining what it fits, that those things it fits are not just the things that gave you the idea for the theory; but that the finished theory makes something else come out right, in addition. In summary, the idea is to try to give all of the information to help others to judge the value of your contribution; not just the information that leads to judgment in one particular direction or another.

Science is a way of trying not to fool yourself. The first principle is that you must not fool yourself, and you are the easiest person to fool.

Richard Feynman (1918-1988) American physicist
“What Is and What Should Be the Role of Scientific Culture in Modern Society,” lecture at the Galileo Symposium, Italy (1964)

Science is the belief in the ignorance of the experts. 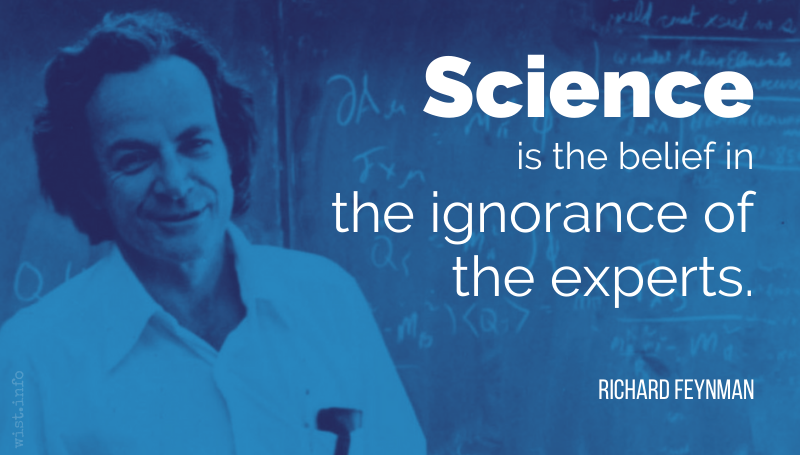 So all fathers took all sons out for walks in the woods one Sunday afternoon. The next day, Monday, we were playing in the fields and this boy said to me, “See that bird standing on the stump there? What’s the name of it?”

I said, “I haven’t got the slightest idea.” He said, ‘It’s a brown-throated thrush. Your father doesn’t teach you much about science.”

I smiled to myself, because my father had already taught me that [the name] doesn’t tell me anything about the bird. He taught me “See that bird? It’s a brown-throated thrush, but in Germany it’s called a halsenflugel, and in Chinese they call it a chung ling and even if you know all those names for it, you still know nothing about the bird — you only know something about people; what they call that bird. Now that thrush sings, and teaches its young to fly, and flies so many miles away during the summer across the country, and nobody knows how it finds its way,” and so forth. There is a difference between the name of the thing and what goes on.

Feynman spoke often about his father, Melvin, and the early science education he got from him. The final phrase above shows up frequently in Feynman's writings and lectures. Variations of the overall story show up in biographies and references, including this version from his autobiographical What Do You Care What Other People Think?, ch. 1 (1988) [with Ralph Leighton]:

So it ended up that the other fathers had to take their children for walks the next weekend. The next Monday, when the fathers were all back at work, we kids were playing in a field. One kids says to me, "See that bird? What kind of bird is that?"

I said, "I haven't the slightest idea of what kind of bird it is." He says, "It's a brown-throated thrush. Your father doesn't teach you anything."

But it was the opposite. He had already taught me: "See that bird?" he said. "It's a Spencer's warbler." (I knew he didn't know the real name.) "Well, in Italian, it's a Chutto Lapittida. In Portuguese, it's a Bom da Peida. In Chinese, it's a Chung-long-tah, and in Japanese it's a Katano Tekeda. You can know the name of that bird in all the languages of the world, but when you're finished, you'll know absolutely nothing whatever about the bird. You'll only know about humans in different places, and what they call the bird. So let's look at the bird and see what it's doing -- that's what counts." (I learned very early the difference between knowing the name of something and knowing something.)

Science is like sex: sometimes something useful comes out, but that is not the reason we are doing it.

Many variations can be found for this quotation (none of them with citation); the word "Science" and "Physics" are often interchanged: As noted here, Frank Oppenheimer (a colleague of Feynman's) was quoted saying, "There's a lot of practical fruits to understanding, but it's like sex. There are practical fruits to sex, but nobody would say that's why you do it, normally." Feynman and Oppenheimer may well have collaborated on the general phrasing, or taken it from one another.

For a successful technology, reality must take precedence over public relations, for nature cannot be fooled.

When playing Russian roulette the fact that the first shot got off safely is little comfort for the next.

The inexperienced, and crackpots, and people like that, make guesses that are simple, but you can immediately see that they are wrong, so that does not count. Others, the inexperienced students, make guesses that are very complicated, and it sort of looks as if it is all right, but I know it is not true because the truth always turns out to be simpler than you thought.

So we have to make guesses in order to give any utility at all to science. In order to avoid simply describing experiments that have been done, we have to propose laws beyond their observed range. There is nothing wrong with that, despite the fact that it makes science uncertain. If you thought before that science was certain — well, that is just an error on your part.

For those who want some proof that physicists are human, the proof is in the idiocy of all the different units which they use for measuring energy.

I have argued flying saucers with lots of people. … I was interested in this: they keep arguing that it is possible. And that’s true. It is possible. They do not appreciate that the problem is not to demonstrate whether it’s possible or not, but whether it’s going on or not. Whether it’s probably occurring or not, not whether it could occur.

No government has the right to decide on the truth of scientific principles, nor to prescribe in any way the character of the questions investigated. Neither may a government determine the aesthetic value of artistic creations, nor limit the forms of literacy or artistic expression. Nor should it pronounce on the validity of economic, historic, religious, or philosophical doctrines. Instead it has a duty to its citizens to maintain the freedom, to let those citizens contribute to the further adventure and the development of the human race.

It doesn’t seem to me that this fantastically marvelous universe, this tremendous range of time and space and different kinds of animals, and all the different planets, and all these atoms with all their motions, and so on, all this complicated thing can merely be a stage so that God can watch human beings struggle for good and evil — which is the view that religion has. The stage is too big for the drama.

Reprinted in Perfectly Reasonable Deviations from the Beaten Track, ed. by Michelle Feynman, Appendix I (2006).

Scientists take it for granted that it is perfectly consistent to be unsure — that it is possible to live and not know. But I don’t know whether everyone realizes that this is true.

Although my mother didn’t know anything about science, she had a great influence on me as well. In particular, she had a wonderful sense of humor, and I learned from her that the highest forms of understanding we can achieve are laughter and human compassion.

It doesn’t seem to me that this fantastically marvelous universe, this tremendous range of time and space and different kinds of animals, and all the different planets, and all these atoms with all their motions, and so on, all this complicated thing can merely be a stage so that God can watch human beings struggle for good and evil — which is the view that religion has. The stage is too big for the drama.

Quoted in J. Gleick, Genius: The Life and Science of Richard Feynman (1992)