It’s always sort of amused me that mankind has been able to come up with a lot of things, two of them being napalm — which is a jellied substance that burns the skin and kills — and Silly Putty, which is something that you can press onto a comic and see a backwards picture of Popeye. And somewhere between these two extremes lies our truth. And I don’t know how good we are at pursuing it.

Discussing the title of his new book, Napalm and Silly Putty.

No one has ever written, painted, sculpted, modeled, built, or invented except literally to get out of hell.

The only American invention as perfect as a sonnet.

Referring to the dry martini cocktail. 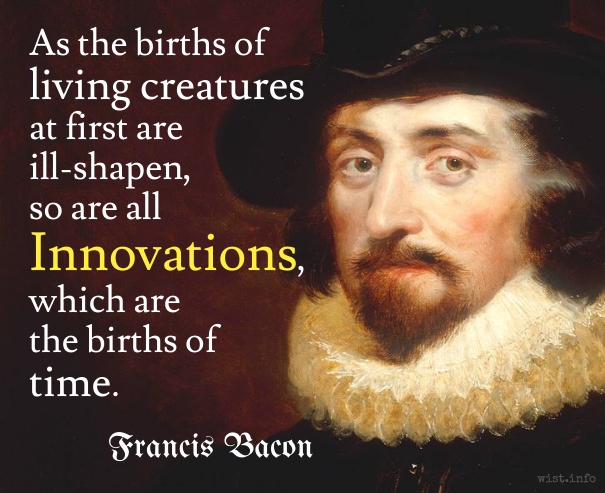 Again, we should notice the force, effect, and consequences of inventions, which are nowhere more conspicuous than in those three which were unknown to the ancients; namely, printing, gunpowder, and the compass. For these three have changed the appearance and state of the whole world; first in literature, then in warfare, and lastly in navigation: and innumerable changes have been thence derived, so that no empire, sect, or star, appears to have exercised a greater power and influence on human affairs than these mechanical discoveries.

So give me the political economist, the sanitary reformer, the engineer; and take your saints and virgins, relics and miracles. The spinning-jenny and the railroad, Cunard’s liners and the electric telegraph, are to me, if not to you, signs that we are, on some points at least, in harmony with the universe; that there is a mighty spirit working among us, who cannot be your anarchic and destroying Devil, and therefore may be the Ordering and Creating God.

Anything one man can imagine, other men can make real.

The most successful men in the end are those whose success is the result of steady accretion. That intellectuality is more vigorous that has attained its strength gradually. It is the man who carefully advances step by step, with his mind becoming wider and wider — and progressively better able to grasp any theme or situation — persevering in what he knows to be practical, and concentrating his thought upon it, who is bound to succeed in the greatest degree.

The inventor … looks upon the world and is not contented with things as they are. He wants to improve whatever he sees, he wants to benefit the world; he is haunted by an idea. The spirit of invention possesses him, seeking materialization.

On a plaque at the entrance to the Alexander Graham Bell Museum in Baddeck, Nova Scotia, Canada.

Perseverance must have some practical end, or it does not avail the man possessing it. A person without a practical end in view becomes a crank or an idiot. Such persons fill our asylums.

An inventor fails 999 times, and if he succeeds once, he’s in. He treats his failures simply as practice shots.

Whenever you look at a piece of work and you think the fellow was crazy, then you want to pay some attention to that. One of you is likely to be, and you had better find out which one it is. It makes an awful lot of difference.

As attributed by Francis Davis, inventor of power steering.

There is no great invention, from fire to flying, which has not been hailed as an insult to some god.

If there is such a thing as luck, then I must be the most unlucky fellow in the world. I’ve never once made a lucky strike in all my life. When I get after something I need, I start finding everything in the world I don’t need — one damn thing after another. I find ninety-nine things I don’t need, and then comes number one hundred , and that — at the very last — turns out to be just what I had been looking for.

They say the religion of your fathers is good enough. Why should a father object to your inventing a better plow than he had?

Get the facts first. You can distort them later.