Revolutionaries are made by fanatical men of action with one-track minds; geniuses in their ability to confine themselves to a limited field.

I think that if the heart in man could be held down by threats — any kind of threat, whether of jail or of retribution after death — then the highest emblem of humanity would be the lion tamer in the circus with his whip, not the prophet who sacrificed himself . But don’t you see, this is just the point — what has for centuries raised man above the beast is not the cudgel but an inward music: the irresistible power of unarmed truth, the powerful attraction of example.

I used to be very revolutionary, but now I think that nothing can be gained by brute force. People must be drawn to good by goodness.

Man is born to live, not to prepare for life.

It’s a good thing when a man is different from your image of him. It shows he isn’t a type. If he were, it would be the end of him as a man. But if you can’t place him in a category, it means that at least a part of him is what a human being ought to be. He has risen above himself, he has a grain of immortality. 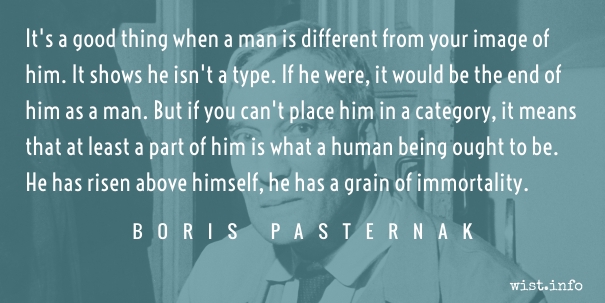