All things are tolerable which others have borne and are bearing.

Each party abuses the other; the profane and the infidel believe both sides, and enjoy the fray; the reputation of religion in general suffers, and its enemies are ready to say, not what was said in the primitive times, Behold how these Christians love one another, — but, Mark how these Christians HATE one another! Indeed, when religious people quarrel about religion, or hungry people about their victuals, it looks as if they had not much of either among them.


On the vociferous denominational debate in America over whether a new bishop should be sent from the Church of England to the Colonies.

ANGEL: Nothing in the world is the way it ought to be. It’s harsh, and cruel. But that’s why there’s us, champions. Doesn’t matter where we come from, what we’ve done or suffered, or even if we make a difference. We live as though the world is as it should be, to show it what it can be.

The essence of success is that it is never necessary to think of a new idea oneself. It is far better to wait until somebody else does it, and then to copy him in every detail, except his mistakes.

Be careful how you live your life, it is the only Gospel many people will ever read. 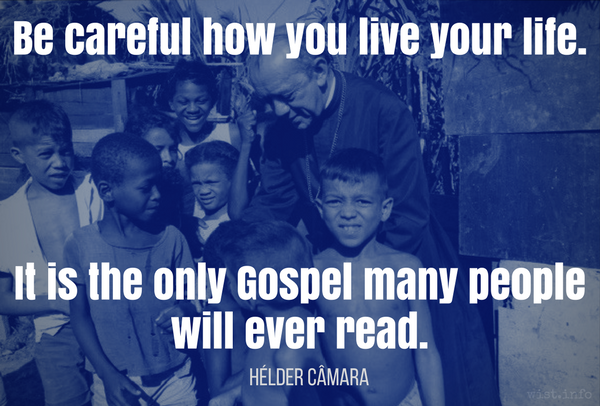 
Quoted in 1985 in Basta, the national news letter of the Chicago Religious Task Force on Central America.

Alt. trans.: "Watch how you live. Your lives may be the only gospel your brothers and sisters will ever read."

Jacob Bronowski (1908-1974) Polish-English humanist and mathematician
Science and Human Values, Part 4 “The Abacus and the Rose” (1956)

Children will imitate their fathers in their vices, seldom in their repentance.

No man or woman of the humblest sort can really be strong, gentle, pure, and good, without the world being the better for it, without somebody being helped and comforted by the very existence of that goodness.

Men think they may justly do that for which they have a precedent.

Indeed a wise and good man will turn examples of all sorts, to his own advantage. The good he will make his patterns, and strive to equal or excel them. The bad he will by all means avoid.

What the world wants iz good examples, not so mutch advice; advice may be wrong, but examples prove themselves.

[What the world wants is good examples, not so much advice; advice may be wrong, but examples prove themselves.] 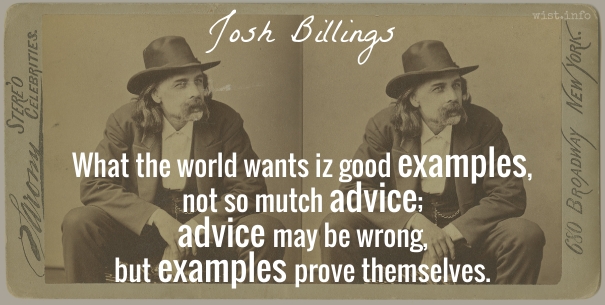 People seldom improve when they have no other model but themselves to copy. 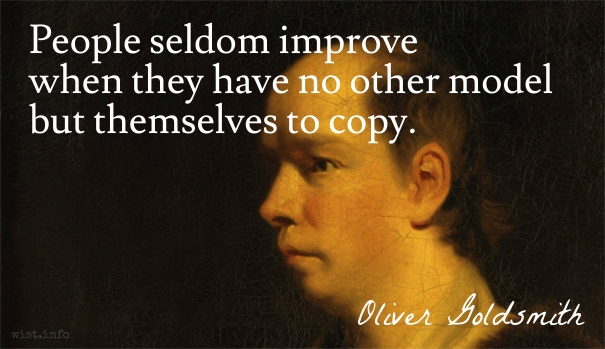 The best foreign policy is to live our daily lives in honesty, decency, and integrity; at home, making our own land a more fitting habitation for free men; and abroad, joining with those of like mind and heart, to make of the world a place where all men can dwell in peace. 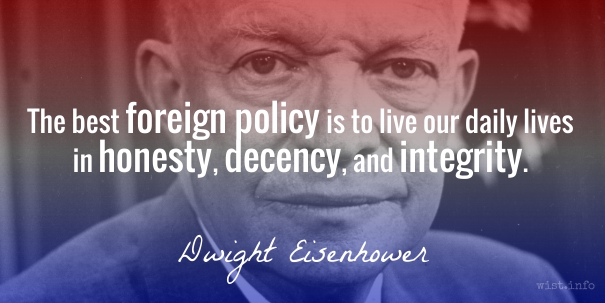 
Eisenhower was President of Columbia University at the time. The quote was widely used in an "I Believe" advertisement for Eisenhower during the 1956 election.

One must be prepared not to act, but to “stand still in the light,” confident that only such a stillness possesses the eloquence to draw men away from lives we must believe they inwardly loathe. 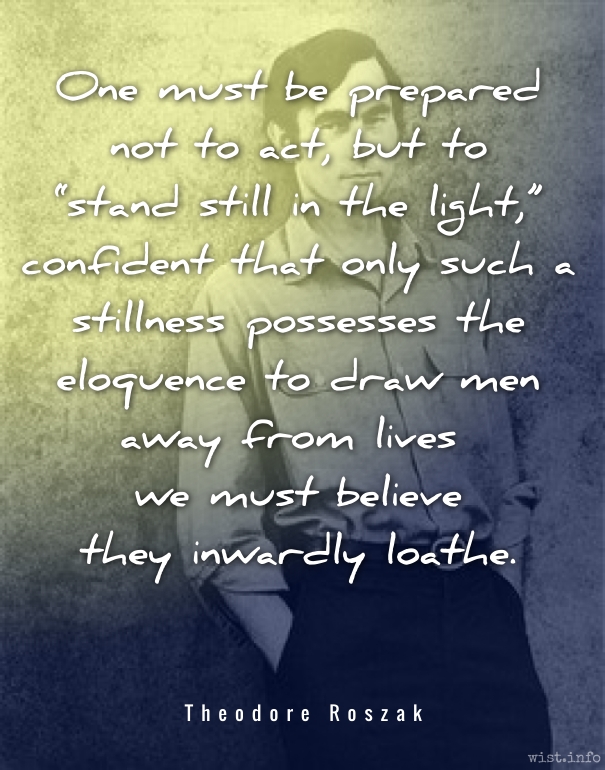 It seems to me that America’s objective today should be to try to make herself the best possible mirror of democracy that she can. The people of the world can see what happens here. They watch us to see what we are going to do and how well we can do it. We are giving them the only possible picture of democracy that we can: the picture as it works in actual practice. This is the only way other peoples can see for themselves how it works; and can determine for themselves whether this thing is good in itself, whether it is better than they have, better than what other political and economic systems offer them.

You never change things by fighting the existing reality. To change something, build a new model that makes the existing model obsolete.

Teenagers can be idiotic and stupid, but teenagers also model their behavior from the signals they get from adults.

We should always bear in mind that numbers represent a simplification of reality.

The World is a very complex system. It is easy to have too simple a view of it, and it is easy to do harm and to make things worse under the impulse to do good and make things better.

Example has more followers than reason. We unconsciously imitate what pleases us, and insensibly approximate to the characters we most admire. In this way, a generous habit of thought and of action carries with it an incalculable influence.

Imitate what is good wheresoever thou findest it, though among Turks, Jews, Pagans, or even Papists. And abominate Evil, though in thy nearest Relation.

A leader leads by example not by force.

Example is the best precept.

Few things are harder to put up with than the annoyance of a good example.

Children have more need of models than of critics.

Essentially, all models are wrong, but some are useful.


As written on p. 424; earlier in the book (p. 74), it is given as: "Remember that all models are wrong; the practical question is how wrong do they have to be to not be useful."