Man has three friends on whose company he relies. First, wealth — which goes with him only while good fortune lasts. Second, his relatives — they go only as far as the grave and leave him there. The third friend, his good deeds, go with him beyond the grave.

I could not find an actual citation for this quotation, but the story (the explanation of a parable, in which a man is summoned before a king, and while his dearest friend will not go with him, and his second best friend will only go to the palace gates, his least-loved friend goes with him before the throne) shows up with different translation in multiple sources:

Why was man created on the last day? So that he can be told, when pride possesses him, God created the gnat before thee.

Who can protest and does not, is an accomplice in the act.

Teach your tongue to say, “I do not know,” lest you err and stumble through your error.

The Divine Spirit does not reside in any except the joyful heart.

When the Egyptians were drowning in the Red Sea, the angels in heaven began to break forth in songs of jubilation, but the Holy One, blessed be He, silenced them: “My creatures are perishing — and ye are ready to sing!”

In Louis I. Newman, comp. The Talmudic Anthology, 103 (1945): "When the Egyptians were drowning, the angels wished to sing. But God said, 'My children are dying, and you would sing?'"

A quotation at the right moment is like bread to the famished.

Examine the contents, not the bottle.

He who carries out one good deed acquires one advocate in his own behalf, and he who commits one transgression acquires one accuser against himself. Repentance and good works are like a shield against calamity.

When man appears before the Throne of Judgment, the first question he is asked is not: “Have you believed in God?” or “Have you prayed and observed the ritual?” He is asked: “Have you dealt honorably and faithfully in all your dealings with your fellow man?”

Charity and loving-kindness are powerful defenses on the Day of Judgment.

If two men claim thy help, and one is thy enemy, help him first.

Deeds of kindness are equal in weight to all the commandments.

Prohibit not something to others which you permit to yourself.

No sackcloth and fasting avail, but repentance and good deeds.

A man may not be responsible for his actions in an hour of tribulation and pain.

Silence is equivalent to confession.

We will be held accountable for all the permitted pleasures we failed to enjoy.

He that feeds the hungry feeds God also.

Loving-kindness is greater than laws; and the charities of life are more than all ceremonies.

He who publicly shames his neighbor is as though he shed blood.

Noted as a common saying. The summary "be discreet" does not appear in the actual Talmud translations I found, but seems to be an explanation from early Christian reviews of the Talmud for when the verse is given as a stand-alone proverb.

These things are good in little measure and evil in large; yeast, salt, and hesitation.

Alt. trans.: "Our Rabbis taught: If one is asked to pass before the Ark, he ought to refuse, and if he does not refuse he resembles a dish without salt; but if he persists too much in refusing he resembles a dish which is over-salted. How should he act? The first time he should refuse; the second time he should hesitate; the third time he should stretch out his legs and go down. Our Rabbis taught: There are three things of which one may easily have too much while a little is good, namely, yeast, salt, and refusal."

Alt. trans.: "There are three things that are harmful in excess but are beneficial when used sparingly. They are: Leavening in dough, salt in a cooked dish and refusal for the sake of propriety." [William Davidson Talmud]

Alt. trans.: "There are three things of which you may easily have too much, while a little is good: yeast, salt, and hesitation." [Joshua of the South, Berakot 5.3]

Alt trans.: "Three things are disagreeable when used in excess, and pleasant when moderately indulged in: yeast, salt, and hesitancy in accepting proffered honours." [Paul Isaac Hershon, The Pentateuch According to the Talmud: Genesis, Part 1, Genesis 19:26, Synoptical Notes: "Salt"]

No labor, however humble, is dishonoring.

Alt. trans.: "Great is labor, for it honors the worker." [tr. Freedman] Alt. trans.: "Labor is great, as it brings honor to the laborer who performs it."

What is hateful to you, do not to your neighbor. That is the whole Torah; the rest is commentary. Go and study it.

(Noted elsewhere as tractate Shabbat 30a.) See also the Bible, Matthew 7:12. Alt. Trans.: "What is hateful to thee, do not unto thy fellow; this is the whole law. All the rest is a commentary to this law; go and learn it."

If a man repents of his evil deeds, and then returns to the same deeds, he has not truly repented.

The gates of repentance are always open.

He who hates a man is as if he hated God.

Every blade of grass has its angel that bends over it and whispers, “Grow, grow.”

Usually attributed to the Talmud, but actually from a Midrash. Alt. trans.: 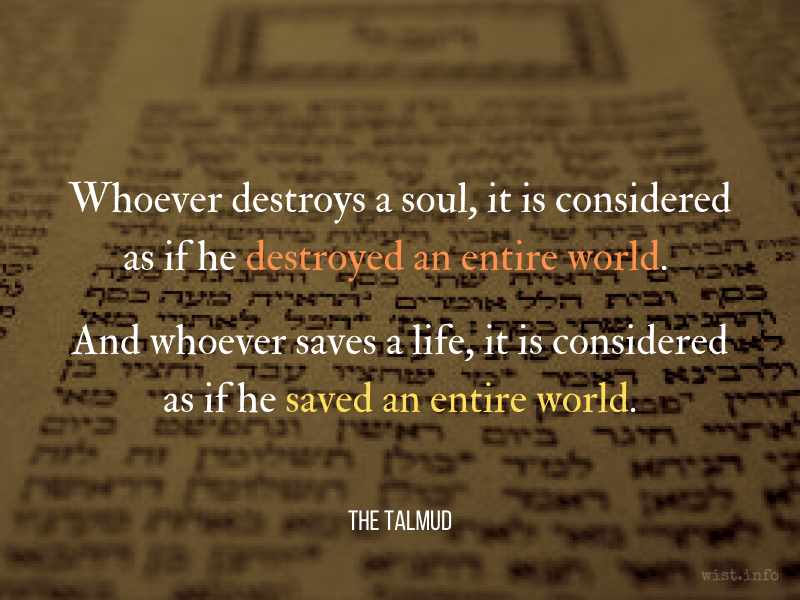 Deeds of kindness are equal in weight to all the commandments.

Don’t threaten a child; either punish or forgive him.

Rabbi Jannai said: “It is beyond our power to explain either the prosperity of the wicked or the afflictions of the righteous.”