Politeness is the art of choosing among one’s real thoughts.

Stated as a possible paraphrase: "It was a maxim with her that politeness is the art of choosing among one's real thoughts."

To me are bedroom joys revealed,
Enjoy at will, my lips are sealed.

I am a night-lamp, privy to the pleasures of the couch; do whatever you please, I shall be silent.
[tr. Bohn's Classical (1859), "A Night-Lamp"]

There is more valour needed not to take up the affair of honor than to conquer in it. When there is one fool ready for the occasion, one may excuse oneself from being the second.

Alternate translation: "There is more courage in avoiding danger than in conquering it. He sees that there is already one rash fool, and avoids adding another." [tr. Maurer (1992)]

Censorship always defeats its own purpose, for it creates, in the end, the kind of society that is incapable of exercising real discretion, incapable, that is, of doing an honest or intelligent job, and thus guarantees a steady intellectual decline.

Originally published in the Saturday Review (1952), based on a speech to the Advertising Council's American Round Table, New York City (1951).

Be your character what it will, it will be known; and nobody will take it up on your own word. Never imagine that anything you can say yourself will varnish your defects or add lustre to your perfections! but, on the contrary, it may, and nine times in ten will, make the former more glaring, and the latter obscure.

A real man of fashion and pleasures observes decency: at least, neither borrows nor affects vices; and, if he unfortunately has any, he gratifies them with choice, delicacy, and secrecy.

Secrets with girls, like loaded guns with boys,
Are never valued till they make a noise.

Alcohol: A liquid good for preserving almost everything except secrets.

(Other Authors and Sources)
Charles Wayland Towne, The Foolish Dictionary (1905)

Noted as a common saying. The summary "be discreet" does not appear in the actual Talmud translations I found, but seems to be an explanation from early Christian reviews of the Talmud for when the verse is given as a stand-alone proverb.

Lesson to the Indiscreet: They who say all they think, and tell all they know, put others on their guard and prevent themselves from being told anything of consequence.

A wise Man will keep his Suspicions muzzled, but he will keep them awake.

The better part of valour is discretion.

Be wiser than other people, if you can; but do not tell them so. 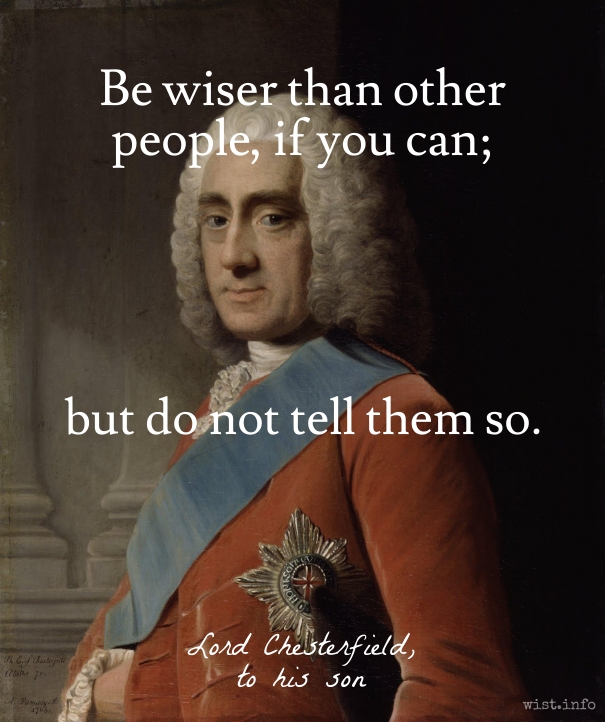 “My dear young lady,” said the Professor, suddenly looking up with a very sharp expression at both of them, “there is one plan which no one has yet suggested and which is well worth trying.”

“We might all try minding our own business,” said he. And that was the end of that conversation.

I will begin to speak, when I have that to say which had not better be unsaid.

Be a listener only, keep within yourself, and endeavor to establish with yourself the habit of silence especially in politics. In the fevered state of our country, no good can ever result from any attempt to set one of these fiery zealots to rights either in fact or principle. They are determined as to the facts they will believe and the opinions on which they will act. Get by them therefore as you would by an angry bull: it is not for a man of sense to dispute the road with such an animal.

(Source (Chinese)). Brooks (below) believes this text was interpolated into Book 8 at the time that Book 14 was collected. Alternate translations:

Without the Proprieties, we have these results: for deferential demeanour, a worried one; for calm attentiveness, awkward bashfulness; for manly conduct, disorderliness; for straightforwardness, perversity.
[tr. Jennings (1895)]

Wear your learning, like your watch, in a private pocket; and do not pull it out and strike it, merely to show that you have one. If you are asked what o’clock it is, tell it; but do not proclaim it hourly and unasked, like the watchman.

Does it really matter what these affectionate people do — so long as they don’t do it in the streets and frighten the horses!

Apocryphally a rebuke c. 1910 to a young actress who criticized an older actor as seeming too affectionate toward the handsome leading man in the production. Most famously given in this form in Alan Dent, Mrs. Patrick Campbell (1961).

Discretion is the salt, and fancy the sugar of life; the one preserves, the other sweetens it.