If I let myself believe anything on insufficient evidence, there may be no great harm done by the mere belief; it may be true after all, or I may never have occasion to exhibit it in outward acts. But I cannot help doing this great wrong towards Man, that I make myself credulous. The danger to society is not merely that it should believe wrong things, though that is great enough; but that it should become credulous, and lose the habit of testing things and inquiring into them; for then it must sink back into savagery.

Every time we let ourselves believe for unworthy reasons, we weaken our powers of self-control, of doubting, of judicially and fairly weighing evidence. We all suffer severely enough from the maintenance and support of false beliefs and the fatally wrong actions which they lead to, and the evil born when one such belief is entertained is great and wide. But a greater and wider evil arises when the credulous character is maintained and supported, when a habit of believing for unworthy reasons is fostered and made permanent. 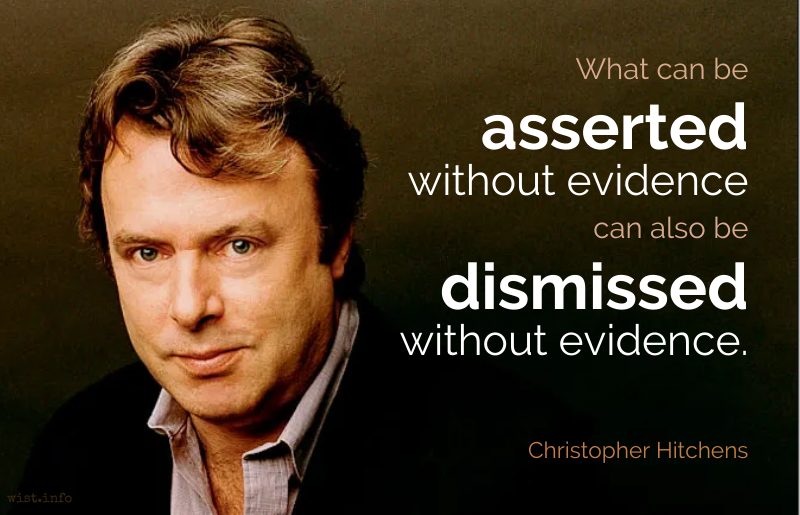 Sometimes referred to as Hitchens' Razor. The concept is not new (consider the Latin phrase "Quod gratis asseritur, gratis negatur"), but was popularized by Hitchens in discussion of contemporary discussion of religion, including in his work God Is Not Great (2007).

While cited by a number of sources to the 2003 Slate article on the canonization of Mother Teresa, the phrase does not appear in the 2016 reprint of the article at the time she was actually declared a saint.

History gets thicker as it approaches recent times: more people, more events, and more books written about them. More evidence is preserved, often, one is tempted to say, too much. Decay and destruction have hardly begun their beneficent work.

It must be remembered that evidence is never complete, that knowledge of truth is always partial, and that to await certainty is to await eternity.

The last phrase is often attributed to Jonas Salk, who used it ("It is said to await certainty is to await eternity") in a telegram to Basil O'Connor (8 Nov 1954). But as Salk himself noted, it was not original to him.

The problem with evidence is it doesn’t always support your opinion.

As for Eisenhower himself, Welch characterized him, in words that have made the candy manufacturer famous, as “a dedicated, conscious agent of the Communist conspiracy” — a conclusion, he added, “based on an accumulation of detailed evidence so extensive and so palpable that it seems to put this conviction beyond any reasonable doubt.”

One of the saddest lessons of history is this: If we’ve been bamboozled long enough, we tend to reject any evidence of the bamboozle. We’re no longer interested in finding out the truth. The bamboozle has captured us. It’s simply too painful to acknowledge, even to ourselves, that we’ve been taken. Once you give a charlatan power over you, you almost never get it back. 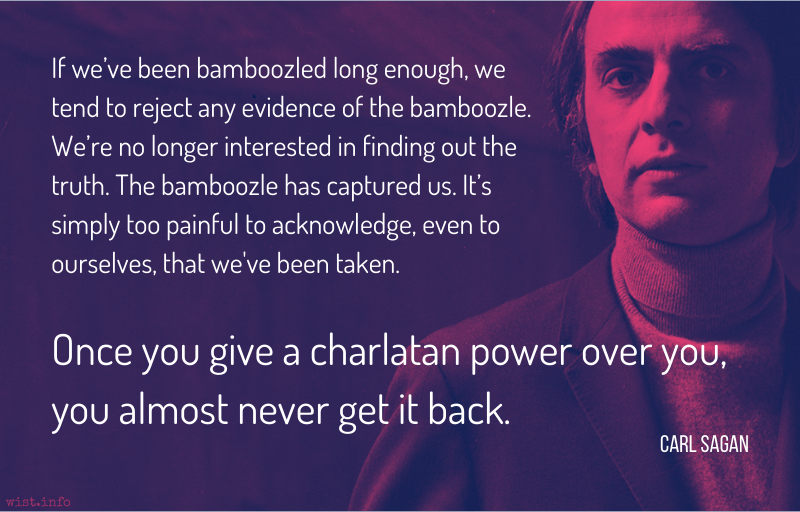 There is nobody, in the commonwealth of learning, who does not profess himself a lover of truth, — and there is not a rational creature, that would not take it amiss, to be thought otherwise of. And yet, for all this, one may truly say, there are very few lovers of truth, for truth-sake, even amongst those who persuade themselves that they are so. How a man may know, whether he be so, in earnest, is worth inquiry; and I think, there is this one unerring mark of it, viz. the not entertaining any proposition with greater assurance than the proofs it is built on will warrant. Whoever goes beyond this measure of assent, it is plain, receives not truth in the love of it, loves not truth for truth-sake, but for some other by-end.

You mean, your statistics are facts, but my facts are just statistics.

Be not afraid! In admitting a creator, refuse not to examine his creation; and take not the assertions of creatures like yourselves, in place of the evidence of your senses and the conviction of your understanding.

One person recently, goaded into desperation by the litany of unrelieved negation, burst out “Don’t you believe in anything?”

“Yes”, I said. “I believe in evidence. I believe in observation, measurement, and reasoning, confirmed by independent observers. I’ll believe anything, no matter how wild and ridiculous, if there is evidence for it. The wilder and more ridiculous something is, however, the firmer and more solid the evidence will have to be.”

Anger is the common substitute for logic among those who have no evidence for what they desperately want to believe.

But the problem with any ideology is that it gives the answer before you look at the evidence. So you have to mold the evidence to get the answer that you’ve already decided you’ve got to have. It doesn’t work that way. 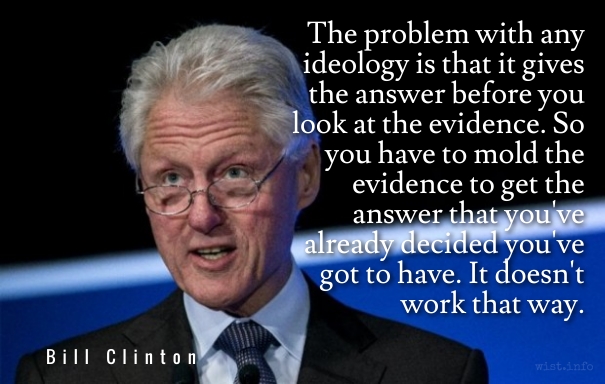 In our reasonings concerning matter of fact, there are all imaginable degrees of assurance, from the highest certainty to the lowest species of moral evidence. A wise man, therefore, proportions his belief to the evidence. […] No testimony is sufficient to establish a miracle, unless the testimony be of such a kind, that its falsehood would be more miraculous, than the fact, which it endeavors to establish.

Often given as just, "A wise man proportions his belief to the evidence."

Don’t think there are no crocodiles because the water is calm.

(Other Authors and Sources)
Malayan proverb

Read the bible then, as you would read Livy or Tacitus. The facts which are within the ordinary course of nature you will believe on the authority of the writer, as you do those of the same kind in Livy and Tacitus. The testimony of the writer weighs in their favor in one scale, and their not being against the laws of nature does not weigh against them. But those facts in the bible which contradict the laws of nature, must be examined with more care, and under a variety of faces. Here you must recur to the pretensions of the writer to inspiration from god. Examine upon what evidence his pretensions are founded, and whether that evidence is so strong as that it’s falshood would be more improbable than a change of the laws of nature in the case he relates For example in the book of Joshua we are told the sun stood still several hours. Were we to read that fact in Livy or Tacitus we should class it with their showers of blood, speaking of statues, beasts &c., but it is said that the writer of that book was inspired. Examine therefore candidly what evidence there is of his having been inspired. The pretension is entitled to your enquiry, because millions believe it. On the other hand you are Astronomer enough to know how contrary it is to the law of nature that a body revolving on it’s axis, as the earth does, should have stopped, should not by that sudden stoppage have prostrated animals, trees, buildings, and should after a certain time have resumed it’s revolution, and that without a second general prostration. Is this arrest of the earth’s motion, or the evidence which affirms it, most within the law of probabilities?

Well aware that the opinions and belief of men depend not on their own will, but follow involuntarily the evidence proposed to their minds; that Almighty God hath created the mind free, and manifested his supreme will that free it shall remain by making it altogether insusceptible of restraint; that all attempts to influence it by temporal punishments, or burthens, or by civil incapacitations, tend only to beget habits of hypocrisy and meanness, and are a departure from the plan of the holy author of our religion, who being lord both of body and mind, yet chose not to propagate it by coercions on either, as was in his Almighty power to do, but to extend it by its influence on reason alone; that the impious presumption of legislators and rulers, civil as well as ecclesiastical, who, being themselves but fallible and uninspired men, have assumed dominion over the faith of others, setting up their own opinions and modes of thinking as the only true and infallible, and as such endeavoring to impose them on others, hath established and maintained false religions over the greatest part of the world and through all time ….

During final debate around the bill's passage: See Jefferson's discussion about a failed amendment to the preamble here.

The human understanding when it has once adopted an opinion (either as being the received opinion or as being agreeable to itself) draws all things else to support and agree with it. And though there be a greater number and weight of instances to be found on the other side, yet these it either neglects and despises, or else by some distinction sets aside and rejects, in order that by this great and pernicious predetermination the authority of its former conclusions may remain inviolate.

The problem with ideology is, if you’ve got an ideology, you’ve already got your mind made up. You know all the answers and that makes evidence irrelevant and arguments a waste of time. You tend to govern by assertion and attacks.

They are ill discoverers that think there is no land, when they can see nothing but sea.

Alt trans: "[They] are indolent discoverers who seeing nothing beyond but sea and sky, absolutely deny there can be any land beyond them."

Facts are stubborn things; and whatever may be our wishes, our inclinations, or the dictates of our passions, they cannot alter the state of the facts and evidence.