Ultimately, the bond of all companionship, whether in marriage or friendship, is conversation. 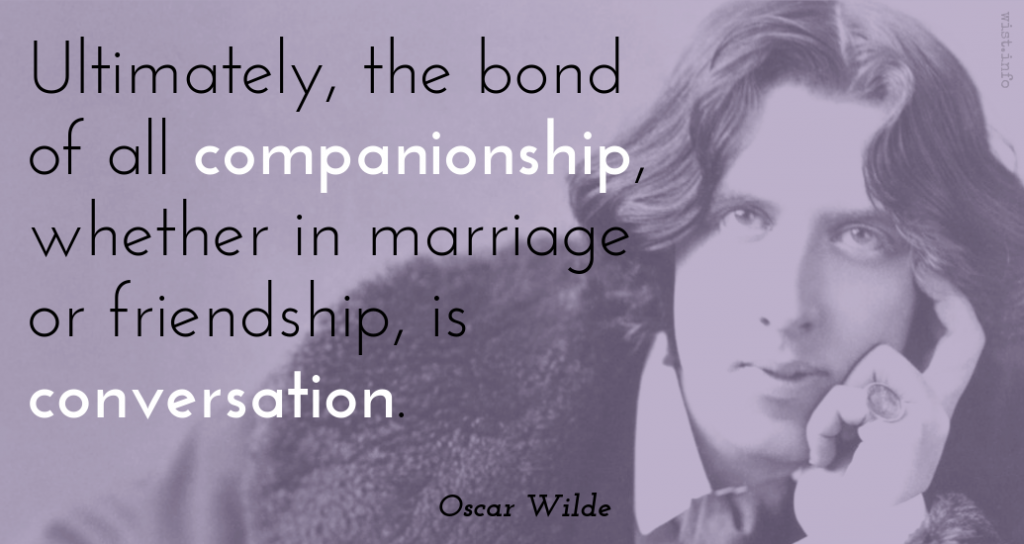 Wilde titled the letter, written while in prison in Reading, England, Epistola: In Carcere et Vinculis ("Letter: In Prison and in Chains"). Upon release, the letter was entrusted to Robert Ross, who in 1905, after Wilde's death, published an edited version under the title De Profundis ("From the Depths," from Psalm 130), and later editions have retained that name. This quotation was not in the 1905 edition, but in the eventually fully-restored version in Wilde's complete letters. More information on the history of the letter here.

And, after all, what is a fashion? From the artistic point of view, it is usually a form of ugliness so intolerable that we have to alter it every six months.

The value of an idea has nothing whatever to do with the sincerity of the man who expresses it.

ERNEST: What is the differnece between literature and journalism?
GILBERT: Oh! journalism is unreadable, and literature is not read.

Yet each man kills the thing he loves,
By each let this be heard,
Some do it with a bitter look,
Some with a flattering word.
The coward does it with a kiss,
The brave man with a sword.

An idea that is not dangerous is unworthy of being called an idea at all.

The security of society lies in custom and unconscious instinct, and the basis of the stability of society, as a healthy organism, is the complete absence of any intelligence amongst its members. The great majority of people being aware of this, rank themselves naturally on the side of that splendid system that elevates them to the dignity of machines, and rage so wildly against the intrusion of the intellectual faculty into any question that concerns life, that one is tempted to define man as a rational animal who always loses his temper when he is called upon to act in accordance with the dictates of reason. 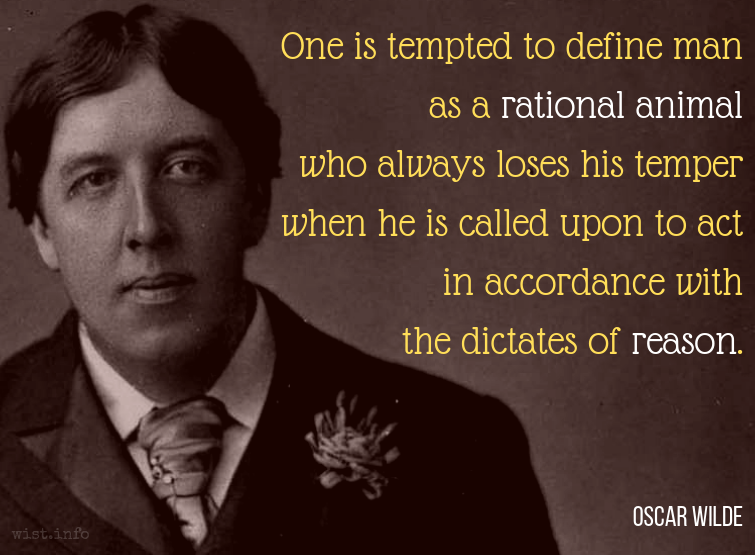 Man is least himself when he talks in his own person. Give him a mask, and he will tell you the truth.

Paradox though it may seem — and paradoxes are always dangerous things — it is none the less true that life imitates art far more than art imitates life.

If you cannot enjoy reading a book over and over again, there is no use reading it at all.

A thing is not necessarily true because a man dies for it.

There is only one class in the community that thinks more about money than the rich, and that is the poor. The poor can think of nothing else.

The basis of optimism is sheer terror.

Simple pleasures are the last refuge of the complex.

Seriousness is the only refuge of the shallow.

No great artist ever sees things as they really are. If he did, he would cease to be an artist.

[Wilde:] I wish I had said that.
[James Whistler:] You will, Oscar, you will.

Anyone who lives within their means suffers from a lack of imagination.

Life is never fair, and perhaps it is a good thing for most of us that it is not.

The consciousness of loving and being loved brings a warmth and richness to life that nothing else can bring.

Nothing is so aggravating as calmness.

Put your talent into your work, but your genius into your life.

The truth is rarely plain and never simple.

Who, being loved, is poor?

Most people are other people. Their thoughts are someone else’s opinions, their lives a mimicry, their passions a quotation.

Those who find ugly meanings in beautiful things are corrupt without being charming. This is a fault.

A true friend stabs you in the front.

Ordinary riches can be stolen, real riches cannot. In your soul are infinitely precious things that cannot be taken from you.

Consistency is the last refuge of the unimaginative.

I sometimes think that God in creating man, somewhat over-estimated his ability.

I have the simplest tastes. I am always satisfied with the best.

Quoted in Edgar Saltus, Oscar Wilde: An Idler's Impression (1917), as a comment made to him by Wilde.

For more discussion about this quotation: I Have the Simplest Tastes; I Am Always Satisfied with the Best – Quote Investigator.

The only difference between the saint and the sinner is that every saint has a past, and every sinner has a future.

They are so pleased to find out other people’s secrets. It distracts public attention from their own.

When the gods wish to punish us, they answer our prayers.

Morality is the attitude we adopt toward people whom we personally dislike.

There is one thing worse than an absolutely loveless marriage: a marriage in which there is love, but on one side only.

If Nature had been comfortable, mankind would never have invented architecture.

It is absurd to divide people into good and bad. People are either charming or tedious.

We are all in the gutter, but some of us are looking at the stars.

Misfortunes one can endure — they come from outside, they are accidents. But to suffer for one’s own faults — ah! — there is the sting of life.

I can resist everything except temptation.

Also attributed to Mark Twain, Mae West, and W. C. Fields. The sentiment may not be original to Wilde, but his use popularized it.

CECIL GRAHAM: What is a cynic?
LORD DARLINGTON: A man who knows the price of everything and the value of nothing.

In this world there are only two tragedies. One is not getting what one wants, and the other is getting it.

More discussion of this quote: There Are Only Two Tragedies. One Is Not Getting What One Wants, and the Other Is Getting It – Quote Investigator.

Experience is the name every one gives to their mistakes.

Experience was of no ethical value. It was merely the name men gave to their mistakes.

A thing is not necessarily true because a man dies for it.

Indeed, in many respects, she was quite English, and was an excellent example of the fact that we have really everything in common with America nowadays, except, of course, language.

On an occasion of this kind it becomes more than a moral duty to speak one’s mind. It becomes a pleasure.

Never speak disrespectfully of Society, Algernon. Only people who can’t get into it do that.

The good ended happily, and the bad unhappily. That is what Fiction means. 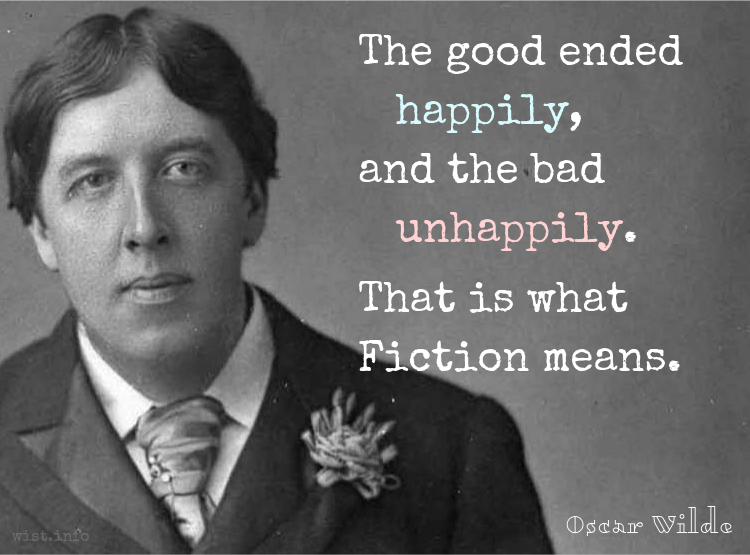 Thirty-five is a very attractive age. London society is full of women of the very highest birth who have, of their own free choice, remained thirty-five for years.

Skepticism is the beginning of faith.

Whenever a man does a thoroughly stupid thing, it is always from the noblest motives.

It is confession, not the priest, that gives us absolution.

There is luxury in self-reproach. When we blame ourselves, we feel no one else has a right to blame us. It is the confession, not the priest, that gives us absolution. 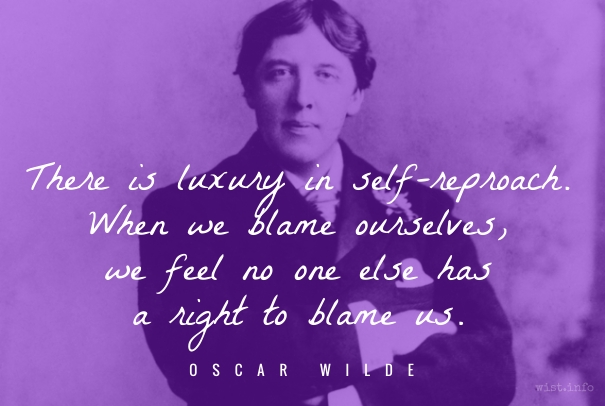 Nothing makes one so vain as being told that one is a sinner. Conscience makes egotists of us all.

There is no such thing as a moral or an immoral book. Books are well written or badly written. That is all.

What is said by great employers of labor against agitators is unquestionably true. Agitators are a set of interfering, meddling people, who come down to some perfectly contented class of the community and sow the seeds of discontent amongst them. That is the reason why agitators are so absolutely necessary. Without them, in our incomplete state, there would be no advance towards civilization. 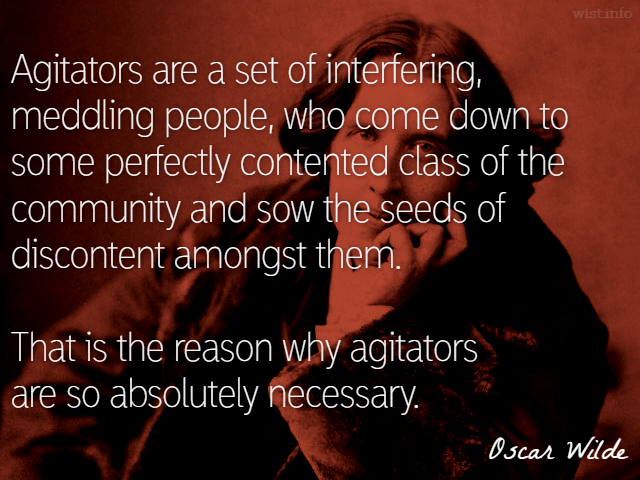 Life is much too important a thing ever to talk seriously about it.

Almost always paraphrased, "Life is too important to be taken seriously."

In Lady Windermere's Fan, Act 2 (1892), he recycled the line as "Life is far too important a thing ever to talk seriously about it."

Also (mis)attributed to G.K. Chesterton. More discussion of this quotation: Life Is Too Important To Be Taken Seriously – Quote Investigator.